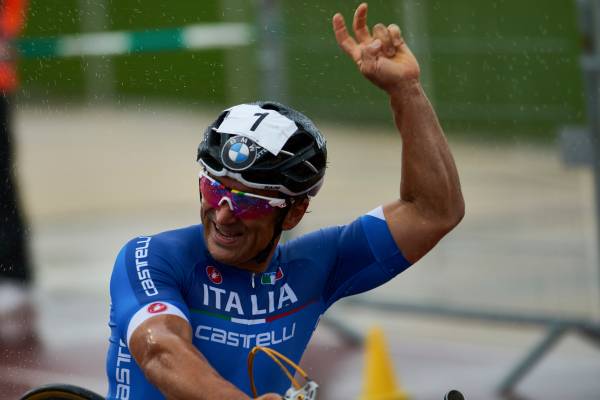 Perfect start for BMW works driver and BMW Brand Ambassador Alessandro Zanardi (IT) to the UCI Para-cycling Road World Championship 2015 in Nottwil (CH): the 48-year-old and the Italian relay team successfully defended their world championship title in the team relay.

Zanardi travelled to Switzerland directly from Spa-Francorchamps (BE), where last weekend he contested his first ever 24-hour race in the BMW Z4 GT3. On their way to the gold medal, Zanardi and his team-mates Vittorio Podestà (IT) and Luca Mazzone (IT) completed six laps of the 2.9-kilometre circuit in 31 Minutes and 13 seconds, covering a total distance of 17.4 kilometres in the process. They crossed the finish line with a clear advantage of 1:11 minutes ahead of the USA team in second place. The bronze medal went to the Swiss relay team.

“I have to admit one part of my heart is still in the BMW Z4 GT3, as the 24-hour race was one of the most enjoyable experiences of my life. But the rest of my heart was soon focused on Nottwil,” said Zanardi. “Over the past three days I have managed to recover in a brilliant way, and I am delighted that I was able to help my team-mates claim our world championship title in the team relay. The conditions were very difficult today with rain and cold temperatures, but we managed to stay out of trouble, which was not easy. So I am very proud of the result and very encouraged for the coming days. I feel really good and I think I can do well in the next races.”

Over the coming days, the individual races in the MH5 (men’s handcycle) category are scheduled for Zanardi. On Friday, his mission will be to defend his world title in the individual time trial. He won this race in both 2013 and 2014. On Sunday, Zanardi will compete in the MH5 road race. He has been crowned World Champion in the road race in 2013 and finished runner-up last year. The results of this year’s UCI Para-cycling Road World Championship count towards qualifying for the 2016 Paralympic Games in Rio de Janeiro (BR).