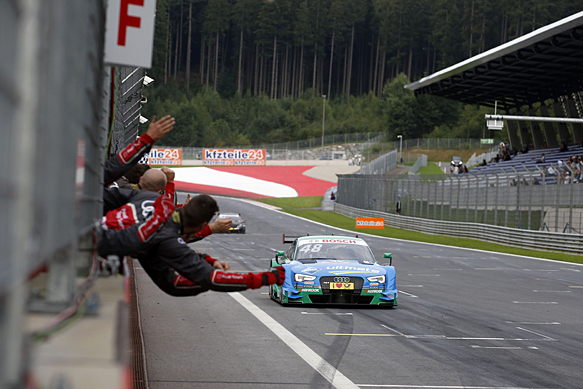 Audi’s Edoardo Mortara claimed the third victory of his DTM career at the Red Bull Ring, as Mercedes Formula 1 reserve Pascal Wehrlein moved into the championship lead. Having topped both practice sessions and taken pole, Mortara was beaten off the line by stablemate and championship leader Jamie Green. However, Green’s run at the front didn’t last long, as he slowed with a gearshift problem on lap two. After dropping to the back to the pack, he retired, ending a two-month stint at the top of the standings dating back to the Lausitzring round in May. When Green slowed, Mortara regained the lead and he never looked back. The Italian quickly established a margin approaching two seconds, and gradually built that to three, before cruising home to add to his DTM tally, which includes a victory at the Austrian circuit in 2012.

Second place and the championship lead went to Wehrlein, who lost second initially to Paul di Resta as they navigated the slowing Green, but took it back shortly afterwards. With his third podium finish of the season, Wehrlein ends the ninth of 2015’s 18 races as the championship leader, with 94 points. Nearly 10 seconds further back, a lonely third was di Resta’s best result since the very first race of the year at Hockenheim, while Christian Vietoris took fourth. Vietoris had to withstand pressure from Augusto Farfus over the second half of the race, but eventually held on.

All the while, Mattias Ekstrom closed on the pair and the Audi veteran pounced on the final lap, passing Farfus – the best of the BMWs – for fifth at Turn 4. As a result, Ekstrom ends the day second in the championship, eight points behind Wehrlein on 86, with Mortara now third on 83 and Green fourth on 81. Gary Paffett, Mike Rockenfeller, Marco Wittmann and Adrien Tambay completed the top 10. Having both been forced wide during the opening lap, Martin Tomczyk and Robert Wickens joined Green as retirements.