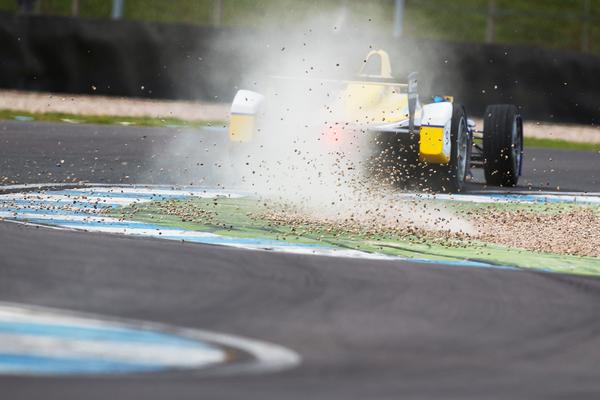 Sebastien Buemi broke the Formula E lap record at Donington Park as he once again set the fastest time in pre-season test. The RENAULT e.dams star set a best lap of 1:31.050s to beat the previous best time at Donington of 1:31.083s, which he recorded at the penultimate pre-season one test. With a good crowd again taking advantage of free entry

to see the Formula E cars in action, Buemi was not the only driver to use the full qualifying mode of 200kw to set his time.

“It was a bit of a scrappy lap, but it’s difficult to do a perfect lap around here,” he said. “I think we could go a second quicker, maybe even into the 1m29s. “I’m quite happy but we are really only at the start of the new package. Now we need to work on the details of the package. We could do quite a bit on the car and the car is a bit easier to drive, the stability is better, the brakes are better. I see some good potential, we just need to extract it from the car.”

Sam Bird was second fastest for DS Virgin Racing, lapping just over four tenths slower than Buemi with a 1:31.469s. “Obviously we did plenty of work before this test so now at Donington it’s just a case of fine tuning and refining to make sure everything works 100 per cent for the first race in Beijing,” he said. “The car is quite a significant change with few gear changes needed but the guys at DS and Virgin have done a fantastic job and hopefully we can head into the season with a strong package.”

Third fastest was Daniel Abt, who had both Abt Schaeffler cars at his disposal after taking over from birthday boy Lucas di Grassi. The German’s best lap was 1:31.537s. Abt said: “For the two days we decided to split the running with Lucas [di Grassi] testing on Monday and myself today. It helped us gain more consecutive running and work on set-up changes more easily. These past two days we’ve focused on fixing software issues and mechanical issues and we took a massive step forward from the first day to the second. The car felt good and fast and it feels like we have a good package.”

It was a good day for Mahindra Racing with Nick Heidfeld in fourth and Bruno Senna in sixth, completing over 50 laps throughout the course of the day. GP2 race winner Tom Dillmann had his first proper test for Team Aguri and he racked up the laps, trying both qualifying simulations and a race run. He recorded the 10th fastest time. Andretti also managed to get out on track, but a series of teething troubles prevented Simona de Silvestro from setting a representative time.