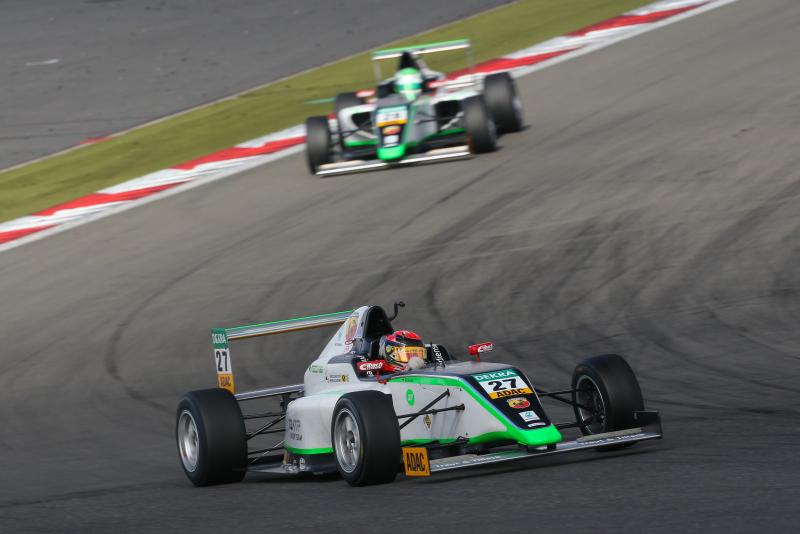 The first ADAC F4 race weekend after the summer break is going perfectly for Marvin Dienst. The HTP Juniorteam driver won both the first and second race at the Nüburgring and thus retakes the lead in the championship for the first time since the season opener at Oschersleben. Janneau Esmeijer (18, NED, HTP Juniorteam) was second once again in the second race, giving HTP Juniorteam their second double victory in the Eifel. Robert Shwartzman (15, RUS, kfzteile24 Mücke Motorsport) in third place completed the party on the podium after the 14th race of the season.

“I now lead the championship and am pleased, of course. But what’s important is to be on top at the end of the season – so far, everything is going according to plan,” said Dienst. The initial start phase was practically a repeat of the first race. Dienst took over the lead from pole-setter Esmeijer on the approach to the first turn, having started in second place on the grid. During the subsequent race, the new overall championship leader was not put off his stride by either of two safety car periods and secured his fifth win of the season at the finish line. Esmeijer was unable to be a threat to his team-mate, but nevertheless easily secured his fourth podium of the year at the chequered flag.

Shwartzman finished back on the podium in the second of three races on the track which boasts a long history. The 15-year-old benefited from an excellent start during which he moved up three positions from P6 on the grid. This was the Russian’s seventh podium after consistently finishing in the Top Three in the last six races before the summer break.

David Beckmann (15, GER, kfzteile24 Mücke Motorsport) improved to take fourth place on the final lap of the race when Ralf Aron (17, EST, Prema Powerteam) dropped down to seventh position from P4. Consequently, ADAC Sports Foundation protégé Beckmann was the best-placed driver of all 17 newcomers to formula racing. The 15-year-old received his trophy on the podium from ex-Formula 1 driver Ralf Schumacher, who was made a member of the ADAC Sports Foundation board of trustees this year.

Mick Schumacher (16, GER, Van Amersfoort Racing) crossed the finish line in sixth place behind fellow rookie Lando Norris (15, GBR, kfzteile24 Mücke Motorsport) who placed fifth. The son of record Formula 1 championship winner Michael Schumacher was involved in some exciting battles during the race and achieved his best finish since winning at the season opener in Oschersleben.

won through and collected more championship points with an eighth-place finish. Eriksson ultimately had to settle for tenth place behind Marek Böckmann (18, GER, Jenzer Motorsport).

After a weekend that has proved difficult so far, five-time race winner Eriksson lost the championship lead that he had secured at the second race weekend of the season. Dienst is now on top with 179 points, while Eriksson is second on 176 points. Mawson in third place overall has amassed 167 points so far and also still has a good chance of winning the first ADAC Formula 4 championship title.