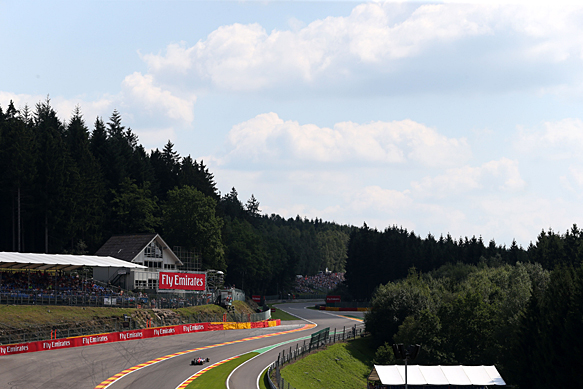 The FIA has removed the ‘sausage’ kerbs added to the run-off at Spa’s Eau Rouge corner after the first day of Formula 1’s Belgian Grand Prix weekend. The kerb had been placed at the top of the Eau Rouge/Raidillon complex, at what is labelled Turn 4, to prevent drivers cutting the corner in that section. Although Friday’s F1 and GP2 sessions passed without incident, both Jann Mardenborough and Adderly Fong’s cars became airborne there after running wide during GP3 practice. Lotus F1 development driver Fong told AUTOSPORT he had expressed his concern after the FIA came to inspect his Koiranen-run car’s damaged monocoque.

“They came over to look at the car because we had some big damage on the monocoque,” he said. “I do think it compromises safety and should be done in another way. Sometimes if you have a moment at Eau Rouge, you get a snap and that’s your run-off. Having a speed bump there I understand for track limits but I think track limits should be policed in another way, because I think that kerb in that place compromises safety. It was painful on the landing because I landed right on the second kerb, and it was enough to break the monocoque.”

Carlin driver Mardenborough said his incident “wasn’t very pleasant”. “You shouldn’t really be out there anyway but needless to say if you are out there there’s not much you can do, it’s out of your control at that point, you’re going to go airborne anyway,” he added.

The change to the kerb – along with the removal of a bump behind the kerb at the exit of La Source – was agreed after discussion in the F1 drivers’ meeting on Friday. An FIA statement said track limits would still be monitored, but that “a report will only be made to the stewards if a driver has exceeded the track limits (principally but not limited to the areas behind the kerbs in Turns 4 [Eau Rouge] and 15 [Pouhon]), and is suspected of gaining an advantage.”

Lotus driver Romain Grosjean was one of the only F1 racers to criticise the kerbs. “It’s not a kerb I would have put there,” he said. “I don’t like it and find it quite dangerous. So far you just know it’s there but it’s completely blind, that’s the tricky part. You’ve got to avoid it as much as you can.”

But his team-mate Pastor Maldonado had been in favour of the change. “Last year I remember it was a bit easier to cut the second apex. It’s a good move for everyone,” he said.