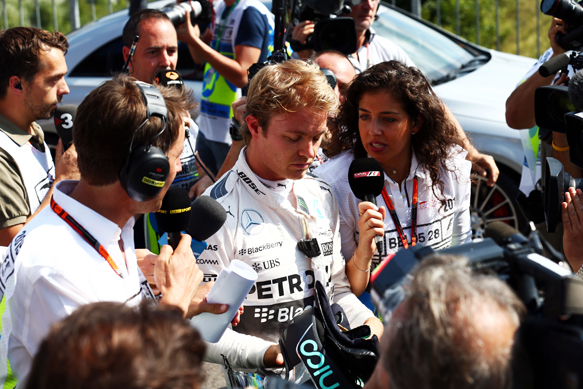 Nico Rosberg wants rapid action from Formula 1 tyre supplier Pirelli before the Italian Grand Prix after the controversial incidents in Belgium last weekend. Mercedes driver Rosberg and Ferrari’s Sebastian Vettel were both involved in high-speed blowouts with Pirelli’s tyres over the course of the Spa event. Rosberg suffered a right-rear tyre failure during second practice on Friday on the approach to Blanchimont. Pirelli blamed it on a cut into the rubber earlier in the lap, as picked up by a rear-facing camera on the car. Vettel was

left fuming post-race when his right rear tyre failed on the penultimate lap as he hurtled along the Kemmel Straight. Rosberg says F1 cannot risk heading to Monza with any doubts over the strength of its tyres.

“Vettel blowing up his tyre, that’s really not acceptable,” said Rosberg in his post-Spa video blog. “For either of us – for me on Friday or for him – if that would have happened a couple of metres earlier or later we would have had huge shunts, I mean the biggest shunts ever, because the track is just so fast. The next track is Monza, the fastest track of the year, so they have to think of something to try and improve that situation.”

Pirelli motorsport boss Paul Hembery said Vettel’s incident was down to wear as the medium-compound tyre was 28 laps old. The German was the only driver trying a one-stop strategy and was running third. The Italian tyre manufacturer also issued a statement claiming if F1 had adopted its request two years ago to limit the various compounds to a certain number of laps then Vettel’s incident could have been avoided.

Rosberg offered some ideas of his own for action Pirelli could take, including greater use of cameras – as advocated by the tyre firm itself on Saturday. “For example, activating all the rear-view cameras so if the teams are watching they can see before a tyre explodes or something, and give us warning, or I don’t know, something like that,” he said.