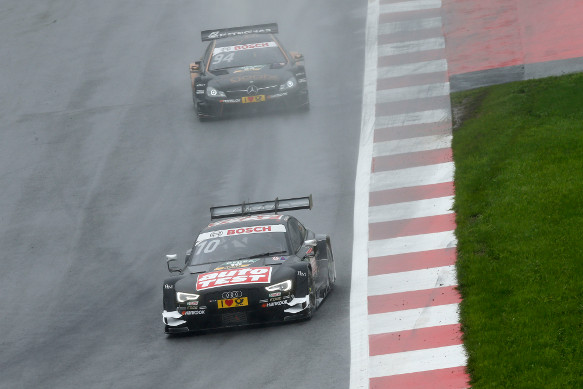 Audi driver Timo Scheider has been banned from this weekend’s DTM round at Moscow Raceway, following a disciplinary hearing into the ‘push him out’ scandal. The court of appeal of Germany’s governing body, the DMSB, met in Frankfurt today (Wednesday) for a further investigation into Audi’s actions at the Red Bull Ring. A radio message of “schieb ihn raus” was broadcast moments before Scheider before he made contact with Robert Wickens’ Mercedes on the final lap of the Sunday race. With Wickens then making contact with stablemate Pascal Wehrlein and the pair finishing the day in the gravel, Scheider was excluded from the race, and potential further action referred directly to the court of appeal.

Audi was found guilty of “unsportsmanlike conduct” in the session and the two-time champion will miss this week’s Russian round. Its motorsport boss Dr Wolfgang Ullrich – who took responsibility for the comments – has been banned from the DTM pitlane and accessing team radio for the rest of the year, and Audi has been fined €200,000, which the DMSB says will go towards youth development and security projects. Audi has also lost the 62 points it scored in the DTM’s manufacturers’ championship in the Sunday race, and said it would not appeal the decisions.

“AUDI AG respects the verdict of the Sports Court,” it said in a written statement. In the spirit of the sport and in the best interests of the DTM, it was important to Audi that the proceedings are closed before the next DTM race at Moscow and attention will again be centred on the sport on the race track. Audi has chosen not to appeal the decision. Audi Head of Motorsport Dr. Wolfgang Ullrich already apologised to Mercedes-Benz and to the DTM fans immediately following the DTM race at Spielberg. For Audi, this means the case is closed. Audi is hoping that in the upcoming DTM races at Moscow attention will again be centred on the on-track sport and that the fans will get to see thrilling DTM races. Audi will issue no further comments on this case.”

Mercedes motorsport boss Toto Wolff said there was no bad blood between his brand and Ullrich, indicating he viewed the Audi chief’s penalty as ‘harsh’. “We have taken note of the court’s decision,” he said in a statement. “Unfortunately our drivers remain without points from the second race in Spielberg. I am sorry for Pascal and Robert because those lost points might still play an important role in the fight for the championship. The court’s decision concerning Dr. Ullrich is certainly harsh. Until this incident we have known him as a man of integrity who has done a lot for the series. There are no differences between Dr. Ullrich and us, and we will continue to work together in the established way. Deleting the points for Audi in the Manufacturers’ Championship means we now lead the standings. However, this is no particular reason for satisfaction because that’s not the way we want to decide a sporting competition.”