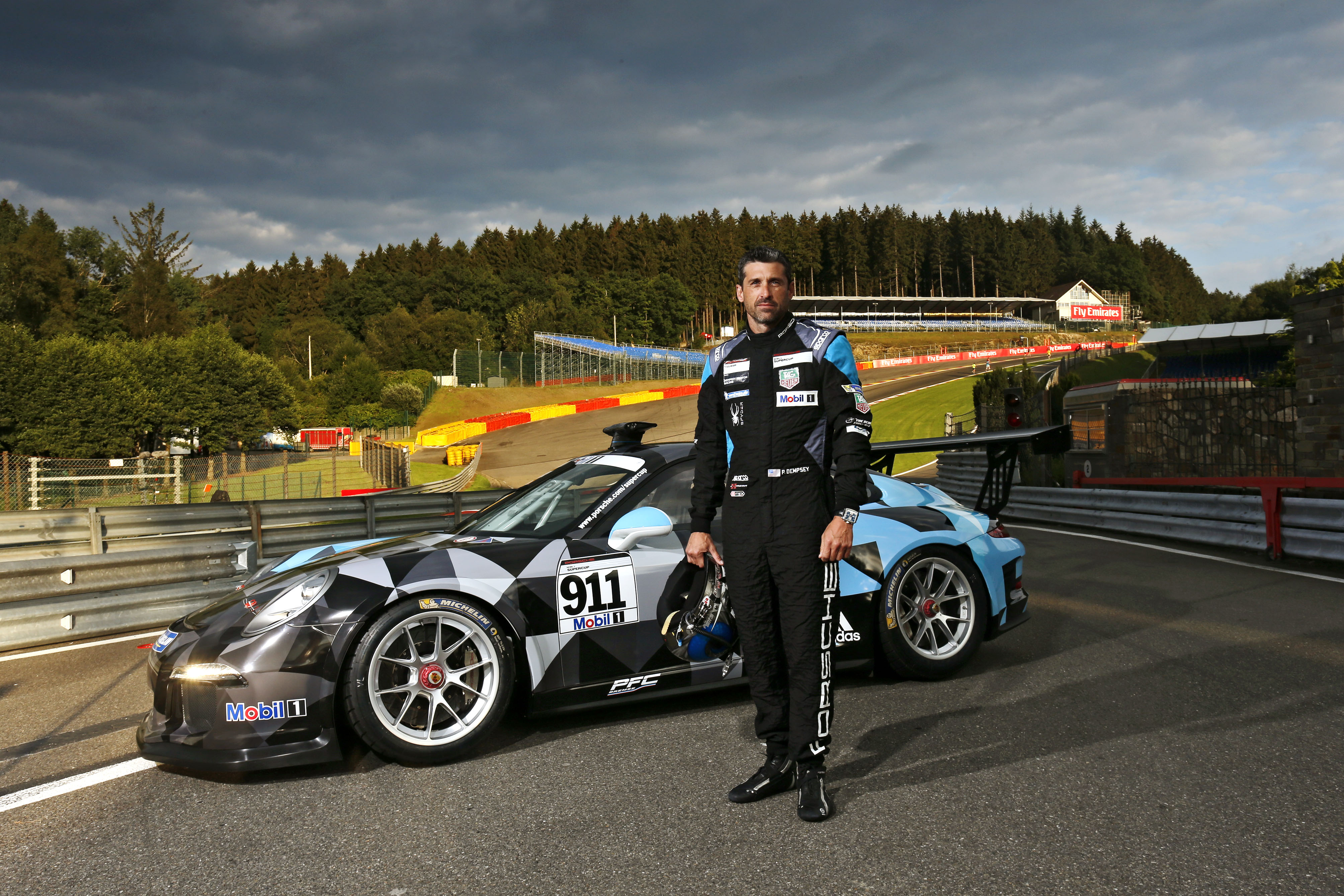 In Spa-Francorchamps, Porsche Mobil 1 Supercup was delighted to welcome back Patrick Dempsey as its VIP driver, a year after his Supercup debut

in Hockenheim last summer. One year on and one year stronger, we took the opportunity to sit down with Patrick and hear his thoughts on racing in general, driving at Le Mans and the Porsche Mobil 1 Supercup in particular and his excitement at competing alongside WRC legend Sebastien Loeb, who also joined the Porsche Mobil 1 Supercup grid in Belgium.

You are passionate about racing and Porsches. How much does racing mean to you?
I would like to be racing all the time. I love it. My dream as a kid was to be an Olympic skier. I ended up riding the unicycle to improve my balance and then that got me in a vaudeville troop, which got me performing, which led to acting. So I really love acting, but my first love has always been racing.

You are well known for participating at Le Mans with Porsche. What’s the difference between Le Mans and sprint races like the Porsche Mobil 1 Supercup?
It is still a new field for me as I took part only at a few sprint races. Driving endurance races is all about getting the best out of the car without overstressing it making sure your teammate is still able to finish the race. But in the Supercup you need to exploit the capabilities right from the beginning.
What do you think about when you sit in your Porsche and wait for the starting lights?
There’s a great tension before the race, but I learned to concentrate on the greater context thanks to the help of qualified people. It’s about visualising exactly what you have to do, what you’ve learned and what you planned with your team. The moments right before the start are nerve-racking but still enjoyable.

And during a race?
The emotions and tension are similar during the race, but you calm down. It’s about self-discipline and concentration; it’s about focusing on the task ahead and not caring about the surrounding elements. Actually, it’s easier in the car compared to the other assignments like the arrival, public relations and press work. I’m able to relax in the car.
Do you feel pressure to succeed as a racing driver like your predecessors Steve McQueen and Paul Newman, who were both Porsche enthusiasts?
I know there are a few of us who did both: acting and racing. I think it is a good combination.
What does it feel like when you are driving?
It’s exciting. You’re dealing with what’s happening in the moment. It’s an incredible metaphor for how you should live life. You can’t deal with the past; you can’t deal with the future. You can only deal with what’s happening right now.

Exciting is a good keyword. How do you feel when you’re surrounded by screaming fans?
I really appreciate the support of my fans. We’ve got a strict program at the racetrack and we totally concentrate on driving and the event. I’m able to focus on my tasks, but it would be great to have some more time to thank everyone for the great reception. If I would have some more time, I could use it to sign autographs and have pictures taken with fans, because without them I wouldn’t be in this position.
What appeals to you about racing?
It is really challenging. You absolutely leave your own comfort zone. Furthermore, I relish that you recognize progress with every single race, which could lead to a great leap forward and bring you closer towards the goal of winning. Plus, it includes a high level of technique, but I reckon the personal and emotional challenges for the driver are enormous – this can be addicting.

How important is racing in your life?
My kids are the love of my life, but racing is right up there. I find it challenging and satisfying; it is like a dream come true to be able to race with the best of them. You can be a great driver, but you need to have a great team. Everything has to work perfectly; everyone has to work together as a whole package, so it is a lot like a chess game really.
Do you collect a lot of cars?
I still have my 1963 356 that Can’t Buy Me Love bought me. I won’t sell that car. I’ve owned a lot of cars, but I don’t need a lot of cars. I don’t need as much as I’ve had in the past. Less is more.
You are not with “Grey’s Anatomy” anymore. But there is a saying: If you close a door, a new one opens up.
2015 is a year of development for me, I’m working on new projects, both in racing and acting/ producing – this is the direction I want to go.
We heard that you’re planning a racing film. Will it be like “Le Mans”?
I am, but it’s hard to produce a film as good as “Le Mans”. This film captures this great time in a beautiful way – furthermore, I adore how the Porsche 917 is shown in the film. But yes, I’m working on such a project. It is based on the book “The Limit” which describes the world cup fight between Phil Hill and Berghe von Trips in 1961. We want to tell the story of these men and their lives in a TV series, but we still have a long way to go. The female protagonist is based on a real person: Denise McCluggage, who was a really good reporter and an excellent driver. The series shows her relationship with the other drivers. This is one project I’m working on.

How did you enjoy your second race for Porsche Supercup at the Belgian Grand Prix?
It’s an extraordinary weekend, I think the opportunity to race in the Porsche Supercup which is so well organised by the stewards, the teams and certainly the drivers make it very easy and welcoming. Certainly, with Sebastian [LOEB] being here it adds an element to it that’s very special for me personally to be so close to him given the success he’s had in the World Rally Championship.
It’s a completely different discipline I need to work on than for the endurance racing. The guys at Porsche Supercup were really helpful, the car was well prepared as always and I learnt a lot this weekend. I worked on my qualifying, worked on my race craft and just really got a better idea in the first race. I had two races which meant I could be a little more aggressive in the first race and the second one was really more focused on getting ready for the Nürburgring, with really consistent pace and race line and racing in a pack which is what I need.
What did you learn about the Supercup series, in particular with regard to its competitiveness?
Yeah, it’s a really good series. These are the guys that go on and have incredible careers  – the young guys that are coming up and also the experienced front runners too that have been doing this for so long they really understand the tyres and qualifying and putting one lap together. That’s really important to have better results in the WEC. It’s just been amazing to have this support and a clear idea of how to develop as a driver. Porsche has a real understanding of that and it’s nice to be part of the driver development programme and I’m very grateful for it.
Redazione MotoriNoLimits