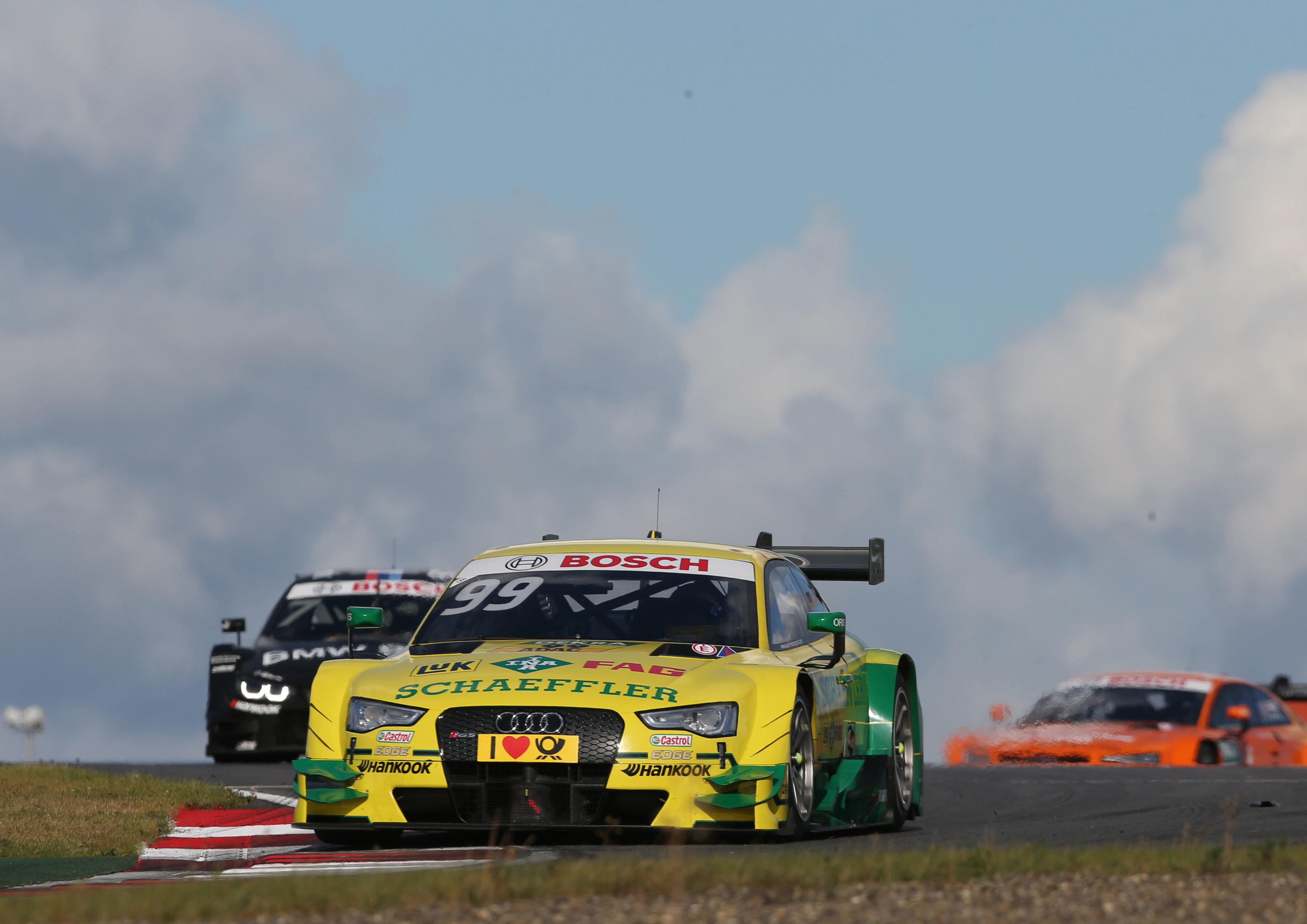 A great day for Audi at Moscow Raceway: Mike Rockenfeller, on delivering a commanding performance in race 12, gave the brand with the four rings its DTM seventh victory of the season. Mattias Ekström, by taking third place, recaptured the lead of the drivers’ standings. Plus, in the manufacturers’ classification, Audi is the number one again as well following the DTM’s round in Russia.

26,000 spectators (throughout the weekend) saw an impressive performance by the Audi squad. Despite driving one of the heaviest cars in the field Mike Rockenfeller was unbeatable on Sunday. In the Schaeffler Audi RS 5 DTM of Audi Sport Team Phoenix, the 2013 DTM Champion secured the top spot on the grid in a thrilling qualifying session and subsequently scored an uncontested victory with a 4.132-second advantage over Bruno Spengler (BMW).

“It was tight only in the first turn,” Mike Rockenfeller said following his second victory at Moscow Raceway. “My start was a little worse than Bruno’s (Spengler) and I had to take a bit of a risk to keep him behind me. Fortunately, it worked out. My team gave me a perfect car today that was exactly the way I need it. Thanks a million for that!”.

Audi Sport Team Abt Sportsline celebrated Mattias Ekström’s third place like a victory. His Red Bull Audi RS 5 DTM had to be prepared again from scratch overnight following the accident in race one on Saturday. In addition, the Swede received a three-place grid penalty by the stewards of the meeting due to the collision.

This did not keep the Swede from battling his way forward from position five on the grid to third place and thus a podium finish. Ten minutes before the end of the race, following a lap-long duel, he overtook Maxime Martin’s BMW. “I learned to be a little more patient yesterday and that paid off today,” Ekström said after his recovery with which the Audi driver reclaimed the lead of the drivers’ standings he had lost on Saturday. “I have to thank my mechanics who gave me a perfect car again overnight and, to top it off, delivered the quickest pit stop as well. A class act!”.

Jamie Green in the Hoffmann Group Audi RS 5 DTM of Audi Sport Team Rosberg completed Audi’s strong overall performance at Moscow Raceway. The Briton was right behind Mattias Ekström nearly throughout the whole race and, on the final lap, still tried to overtake Maxime Martin as well, but remained in fifth place. Edoardo Mortara in the Castrol EDGE Audi RS 5 DTM, in position eight, defended his third place in the DTM drivers’ standings. In the early stage, in a thrilling duel with Saturday’s winner Pascal Wehrlein, the Italian prevailed. Nico Müller in the Audi Financial Services Audi RS 5 DTM saw the checkered flag ahead of the Mercedes driver and title contender as well. Like the day before, Müller finished ninth.

“This was a dream result for Audi today,” Dieter Gass, Head of DTM at Audi Sport, said, summing up the event. “We saw two thrilling DTM races and an extremely strong Audi RS 5 DTM here in Russia. A big ‘thank you’ goes to the entire squad that had to work extremely hard to prepare the cars again following the two accidents yesterday. That was a really strong performance. But we won’t have a lot of time to celebrate because the season continues at Oschersleben in only two weeks from now. Following today’s victory, we’re going to have pretty heavy cars again there as well. The DTM definitely remains thrilling.”