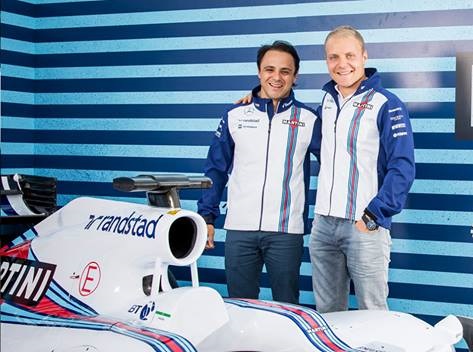 WILLIAMS MARTINI RACING is pleased to confirm that the partnership of Felipe Massa and Valtteri Bottas will be retained for a third season in the 2016 FIA Formula One World Championship. Felipe joined the team for the 2014 season and has so far scored one pole position, at the 2014 Austrian Grand Prix, and four podium finishes. His experience of more than a decade at the pinnacle of Formula One is a valuable asset to the team. Valtteri is one of the sport’s most promising talents, with seven podiums to his name in the last two seasons. He has developed as a driver at Williams from being a future prospect, through our development programme, to now being one of the most sought-after drivers on the Formula One grid.

Speaking about the announcement Felipe Massa said; “I am very happy to be a part of the Williams family. I am in my second year here and am so pleased to be staying as we are working very well together as a team. They respect me a lot and the results are there, and it has been so nice to be part of the big turnaround the team has seen since the end of 2013. I can’t wait to carry on and continue pushing even more for the team, and for myself. Thank you to Frank, Claire, Mike, Pat and the whole Williams team for their ongoing support and belief in me, as we build on what is already a great relationship.”
Valtteri Bottas added; “I am really pleased to be staying with the team for a fourth F1 race season. We have been getting stronger as a team and I look forward to what next year will bring, as I believe we can achieve even stronger results than what we have seen so far. I can’t wait for 2016, however I am still fully focused on this season as we still have plenty of challenges to achieve. I must thank Frank, Claire, Mike, the Board, and everyone at Williams for their continued trust in me.”

Sir Frank Williams, Founder and Team Principal, said; “I’m delighted to confirm that Felipe and Valtteri will be racing for Williams once again next year. Stability is key for any team to thrive in Formula One, so to be able to enter a third season with one of the strongest driver line-ups on the grid puts Williams in a fantastic position to continue its momentum towards the front of the grid in 2016. Felipe’s blend of experience and raw speed is a rare attribute in Formula One. Felipe thrives in an environment where he is valued and can build a long-term relationship and we are delighted that he has become such an important part of the Williams family. Valtteri has become such a staple of Williams that we are as excited about the prospect of his potential as a championship contender as we are about returning the Williams name to the top of Formula One.
“Felipe and Valtteri quickly developed an exceptional working relationship from the beginning of 2014 and, while they remain fiercely competitive as rivals, they have always recognised the value of their collaboration in driving the team up the grid. Their shared work has given the technical team at Williams the best possible guidance in how to deliver the performance needed to carry the team forward, and both drivers have played a pivotal role in the rejuvenation of Williams. The successes we’ve enjoyed over the past two seasons would not have been possible without them, and they will play an essential role in the targets we aim to deliver in the future.”
Redazione MotoriNoLimits