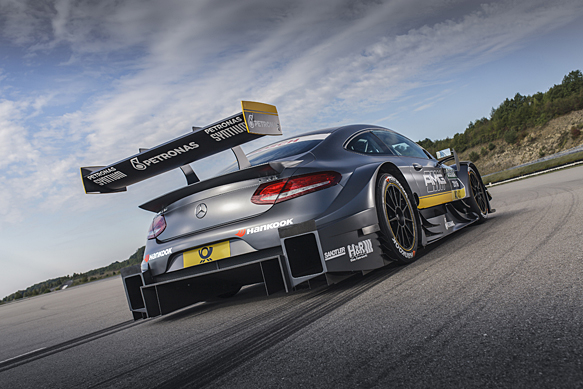 Mercedes has taken the covers off of its 2016 DTM challenger, before its official launch at the International Motor Show in Frankfurt. Design impressions of the AMG C 63 Coupe-based racer were released last weekend, and Mercedes has now showcased the bodywork it will sport next year.

“The DTM car again takes its design and technological cues from the AMG line of the new C-Class Coupe,” Mercedes DTM chief Ulrich Fritz said. “We took the first steps in adapting designs for the new DTM car last year.”

Frozen regulations mean the only changes are to the bodywork, above the defined ‘design line’ at the wheel arches. “The regulations severely limit areas for development, so a large number of components have been taken from its tried and tested predecessor,” Fritz said. “Obviously, in the DTM, we seek to continuously optimise the overall package and, consequently, the vehicle passes through various development processes and stages during the course of its entire life cycle as deemed necessary.”

Mercedes’ new C-Coupe will only be raced for one season, with the DTM’s Class One technical platform being introduced in 2017 set to feature major changes. BMW will stick with its existing M4 next year, while Audi says its focus remains on the 2015 season.