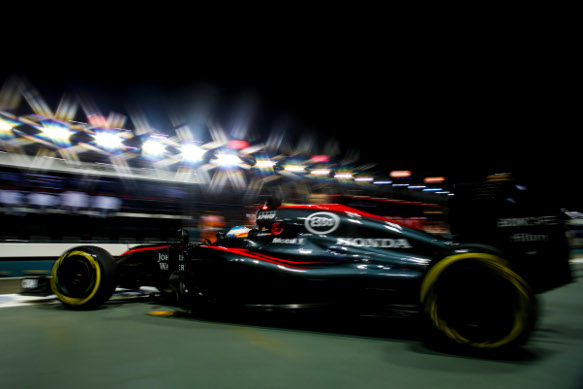 Honda could be ready to supply another Formula 1 team with engines from the start of 2017, according to McLaren racing director Eric Boullier. The Japanese manufacturer returned to F1 this year with McLaren as its only team, and so far the partnership has been skeptical of any additional teams actually providing a benefit. However, when asked on Saturday evening at the Singapore Grand Prix if more teams could be added to Honda’s roster, Boullier said McLaren and its engine partner are open to the possibility.

“You all know that in the current agreement for an engine manufacturer to enter Formula 1 there is the possibility to supply other teams,” said Boullier. “It’s a question we have discussed already and we keep discussing with Honda. And at the right time for our partnership we would be ready – Honda would be ready, yes – to supply another team. We are partners, we are discussing, and we will agree when we do it.”

Boullier denied McLaren has a veto over Honda supplying other teams, and he said it could be possible from 2017. “Our voice is considered as a partner – it’s not a veto,” he said. “[From 2017] it could be possible, why not? That means the engine would be attractive for another team, so I see that as a positive.”

Boullier added he is not surprised to see Mercedes and Ferrari engines commanding the market in F1 at the moment. “When we had the V8 and the frozen engines that were more or less all the same, there were some commercial deals and it was fairly split [between the manufacturers],” he said. “Today the two strongest engines on the grid are Mercedes and Ferrari so it is not surprising most of the teams want them. At some stage, you could say you have to ‘rebalance’ the market”.