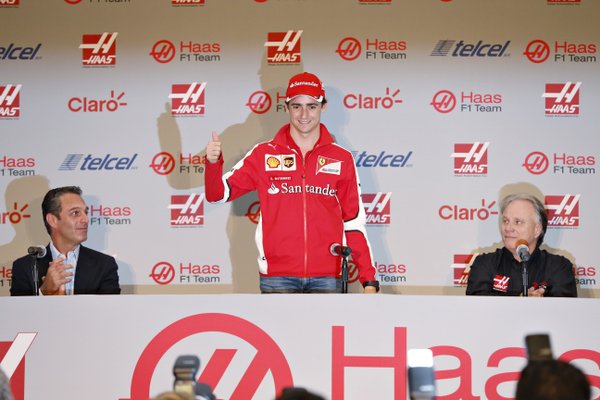 to a race seat with his team when it makes its 2016 debut in the FIA Formula One World Championship. Gutiérrez will race alongside driver Romain Grosjean, who was previously announced by Haas on Sept. 29 in a press conference at the team’s U.S. headquarters in Kannapolis, North Carolina. Haas F1 Team is the first America-led Formula One team in 30 years. The 24-year-old Gutiérrez is currently the third driver at Scuderia Ferrari, the technical partner of Haas F1 Team. Gutiérrez joined Scuderia Ferrari in 2015 after spending the 2013-2014 seasons with the Ferrari-powered Sauber F1 Team.

“I got to know Esteban through our relationship with Ferrari, and after looking at the success he’s had to earn his role there, it became clear he was an excellent choice for our race team,” Haas said. “He’s young and hungry, but not inexperienced. His two years running a full F1 schedule has given him some very good race experience, and having spent this season at Ferrari as their third driver allowed him to see firsthand the methodology that makes Ferrari such a power in Formula One. We’re very happy to have Esteban as a part of our race team. Between him and Romain, we have a strong driver lineup that will help us develop our car and, ultimately, score some points in our inaugural season.”

Gutiérrez will get his first drive with Haas F1 Team during the preseason test Feb. 22-25 at Circuit de Catalunya in Barcelona. A second test at Barcelona takes place March 1-4 before the season-opening Australian Grand Prix March 20 in Melbourne. “This is an excellent opportunity that builds on my time with Ferrari and I will make the most of it,” Gutiérrez said. “Gene Haas believes in me and I believe in how he’s going about competing in Formula One. To have a race seat in a competitive car with Ferrari power is very special, and I appreciate the faith he has in me. I trust we’ll be able to achieve great things together.”

“All along we said we were looking for experienced drivers, and we have that with Romain and Esteban,” said Guenther Steiner, team principal, Haas F1 Team. “Romain has more starts, but Esteban has a deep knowledge of Ferrari and how they do things. He’s learned from the best in his role as their third driver, which means he knows how they’ve developed their current cars. He’s been a big part of that and he’ll be a big part in the development of our cars at Haas F1 Team.”

“Tonight, we are particularly proud of the Telmex and Telcel Racing Team, not only for

Mexican motor racing, but for sport in general in our country,” said Carlos Slim Domit, president of the Telmex-Telcel Racing Team. “Today, we can confirm the talent and the experience of Esteban Gutiérrez with his continuing career in Formula One as an official driver for Haas F1 Team, with whom we feel very happy to start a new adventure.”

Gutiérrez began his racing career in 2004, competing in the final three rounds of the Mexican Rotax Max Challenge karting championship. He won the North Mexican Series in 2006 and finished fourth in the Mexican Grand Nationals. At the same time, he scored five wins from five starts in the Camkart Challenge Mexico Series. A jump to open-wheel racing followed in 2007 when Gutiérrez took his talents to the inaugural Formula BMW USA Series. He scored nine pole positions and earned four victories from a total of eight podium finishes, securing Rookie of the Year honors and a second-place standing in the championship.

yed in America continued in Europe when he joined the Formula BMW Europe Series in 2008. With seven wins – six of which came consecutively – Gutiérrez won the championship. At age 17, he was the youngest Mexican driver to win an international driving title, and it earned Gutiérrez his first taste of Formula One, as the prize for winning the European championship was a test for Sauber F1 Team. The breakout season allowed Gutiérrez to spark the interest of ART Grand Prix, one of the benchmark junior open-wheel team across various European series. Together they contested the 2009 Formula 3 Euro Series with Gutiérrez scoring a pair of podium finishes at the Nürburgring in Germany and Dijon in France. The creation of the new GP3 Series for 2010 allowed Gutiérrez and ART Grand Prix to set a new benchmark. Five wins were scored from eight podiums, allowing Gutiérrez to wrap up the inaugural championship with two rounds to spare.

With two championships in two years, Sauber F1 Team signed Gutiérrez as its test and reserve driver for 2011. The role allowed Gutiérrez to continue racing, as he moved up to the GP2 Series, where he won in the fourth round in Valencia, Spain. In 2012, Gutiérrez continued his dual role of test and reserve driver for Sauber F1 Team while racing in GP2. His improvement was impressive, as he took three victories on his way to third in t

he championship standings. Having seen Gutiérrez’s maturation, Sauber F1 Team named him to a fulltime race seat in 2013 alongside Nico Hulkenberg. Gutiérrez made his Formula One debut at the Australian Grand Prix in March 2013, qualifying 18th and racing to a 13th-place finish, the highest-placed rookie in the field. His first point-earning finish came later that year in the Japanese Grand Prix at Suzuka when he finished seventh.

A second season with Sauber F1 Team produced a best finish of 12th, earned in the opening round of 2014 at the Australian Grand Prix. But despite the lack of results, Gutiérrez’s perseverance and driving style piqued the interest of Scuderia Ferrari. The Italian team signed Gutiérrez as its third driver in 2015, joining the lineup of four-time Formula One champion Sebastian Vettel and 2007 Formula One champion Kimi Räikkönen. In 2016, Gutiérrez brings his insight and driving acumen to Haas F1 Team, enhancing the technical partnership it has with Scuderia Ferrari.

Welcome in the team @EstebanGtz ! Looking forward working with you and have a successful time with @HaasF1Team ! #MexicoGP #r8main #f1 #2016