GP3: Kirchhöfer wins as title battle goes to the wire 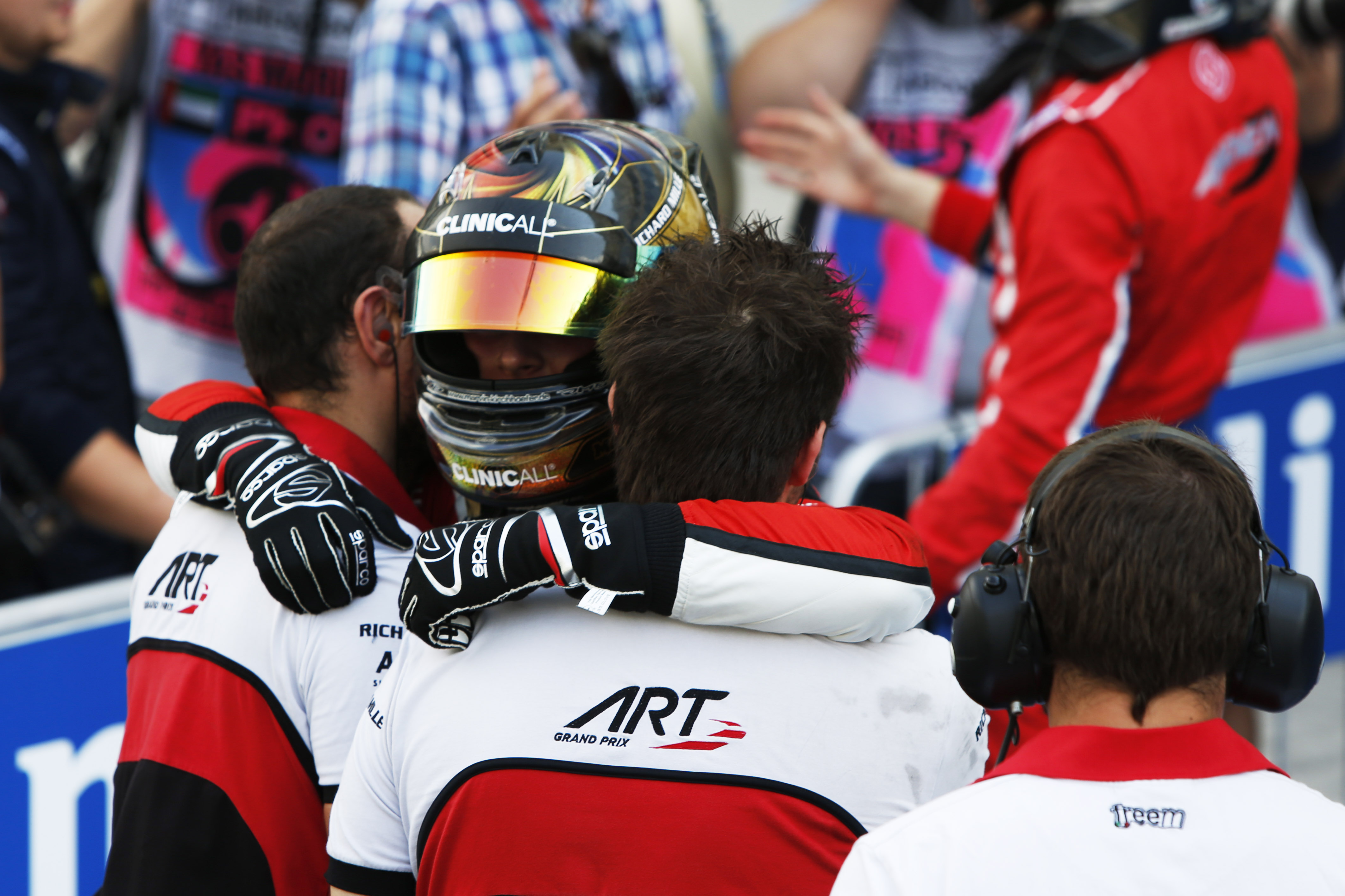 The fight for the GP3 crown will be decided tomorrow at the season finale in Yas Marina. ART Grand Prix’s Esteban Ocon led the race from start to finish

but the Frenchman was given a five second time penalty for exceeding track limits and gaining and advantage on lap one. His teammate Marvin Kirchhöfer therefore won the race, with Arden International’s Emil Bernstorff hot on his tails in second. Koiranen GP’s Jimmy Eriksson was third. Ocon thus finished in P4, one place ahead of his fellow title contender Luca Ghiotto from Trident. The Mercedes junior now holds a six point advantage over the Italian. Ocon started from pole and he maintained the lead ahead of Kevin Ceccon. But Ocon ran wide, exceeding track limits. Meanwhile Ghiotto dropped two places at the start to run P6 knowing his title rival was out front leading the race. At this point, Ocon had done enough to claim the GP3 crown if the positions remained the same. Kevin Ceccon, Kirchhöfer, Eriksson and Bernstorff were second to fifth before a safety car was deployed after Carlin’s Adderly Fong and Alfonso Celis. Jr made contact at Turn 6. The Mexican retired in the pitlane.

Once the race resumed, Ocon found himself under investigation for gaining an advantage on the opening lap and very significantly in the fight for the GP3 crown he received a five second time penalty. At this point he held a 4.9s lead back to Ghiotto in P6. On lap four, Bernstorff passed Eriksson for fifth, with Ocon 1.3s ahead of “net” race leader Ceccon. Ghiotto knew he had to claw back points and in doing so he ran wide several times through-out the race, locking the brakes up and losing valuable time. There was heartbreak from Ceccon who saw his chances of victory dashed after he retired with technical gremlins. Therefore the action between Kirchhöfer and Bernstorff became the duel to watch as they were fighting for the lead; unless Ocon managed to pull a 5s advantage over his teammate.
The Virtual Safety Car was deployed on lap 9 after Trident’s Michele Beretta made contact with Campos Racing’s Zaid Ashkanani. The Italian was later penalised. Ocon’s advantage at the front remained 1.3s with a 6s deficit back to Ghiotto. On lap 15, Ghiotto ran wide again, which left him vulnerable and in the clutches of a chasing Matthew Parry. In the final few laps Bernstorff was on the attack and was glued to the rear of Kirchhöfer ART GP machine, as he could sniff a potential win. But at the chequered flag, it was Ocon who crossed the line first – but his time penalty dropped him to fourth place. Kirchhöfer claimed his fifth win of the season ahead of Bernstorff and Eriksson – the trio completing the podium. The battle between Kirchhöfer and Bernstorff had more than just a victory at stake – the two were separated by just one point coming into this event for third place in the Drivers’ Standings, with the German now edging the Brit by eight points. Ocon posted the fastest lap of the race, earning himself a further two points which may prove pivotal in who becomes 2015 GP3 Series Champion. Ocon, Ghiotto, Parry, Antonio Fuoco, Alex Palou, Matevos Isaakyan and Artur Janosz rounded out the top ten.
Race 2 will commence at 10.00 am local time tomorrow with Palou starting from reverse pole. All eyes will be on Ghiotto starting in P4, one place ahead of Ocon – with them both knowing a champion will be crowned tomorrow. Ocon has the six point advantage but anything can happen…!
Redazione MotoriNoLimits