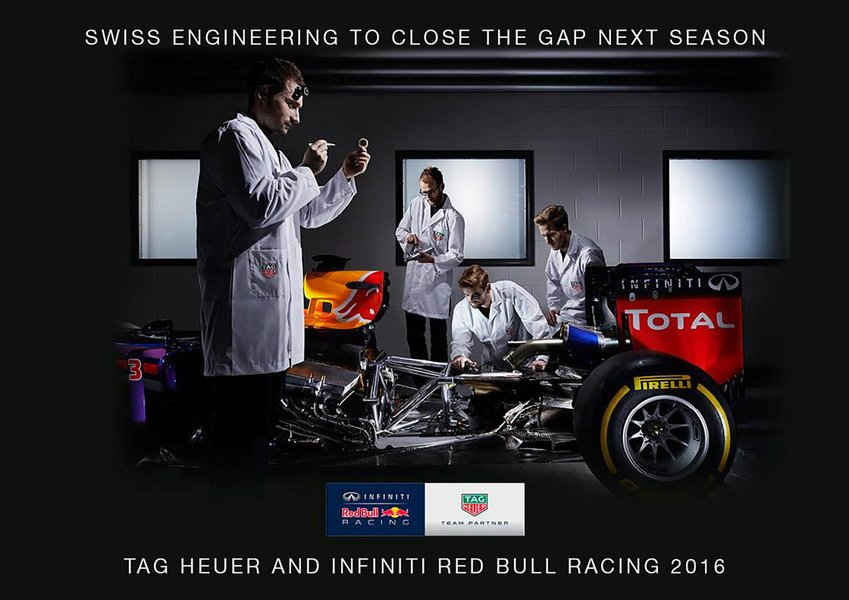 From the milliseconds that separate victory from defeat to the finely balanced and perfectly measured rhythm of a racing engine, in motorsport timing is everything. As the curtain falls on the 2015 Formula One season and the sport gears up for next year’s challenge, the timing is right for Red Bull Racing to reveal that the team’s 2016 F1 car will race with a power unit carrying the name of motorsport’s most iconic timing brand – TAG Heuer.

The new partnership, which represents a shift away from F1’s conventional supply systems, will see TAG Heuer take up naming rights of the team’s power unit, which will be supplied by Renault. The new car will be christened the Red Bull Racing-TAG Heuer RB12.

Deepening the relationship between the team and the legendary timing house, which can call on more than half a century of heritage at the cutting edge of motorsport, TAG Heuer will become the Official Timekeeper, Official Watch Partner and Team Performance Partner of the Red Bull Racing team from 2016 in a multi-year partnership.

Welcoming the new partnership, Christian Horner, Team Principal, Red Bull Racing, said: “TAG Heuer and Red Bull are two transcendent brands which have both a passion for racing and a drive to do things differently, and this unique collaboration is further evidence of that. TAG Heuer has been an icon in the world of Formula One for many years and we’re delighted that they’ve chosen to continue their association with the sport by teaming up with us. Our shared values of innovation and a desire to stand out from the crowd make this one of the most exciting partnerships in F1. We are also pleased to see Renault confirm its long-term commitment to F1 and would like to thank them for their contribution to the team since 2007. Their technical partnership with Ilmor gives us confidence, and we look forward to the 2016 season.”

Jean-Claude Biver, CEO of TAG Heuer and President of the LVMH Watch Division, added: “Formula One is deeply-rooted in TAG Heuer’s DNA, and Red Bull Racing is a young, dynamic and driven team, which perfectly fits with our marketing strategy. It will give TAG Heuer great visibility and allow us to make our partnership exciting, different and innovative. Our motto #DontCrackUnderPressure will be the guiding principle behind all our actions with the support of the Red Bull Racing team and its highly contagious enthusiasm.”