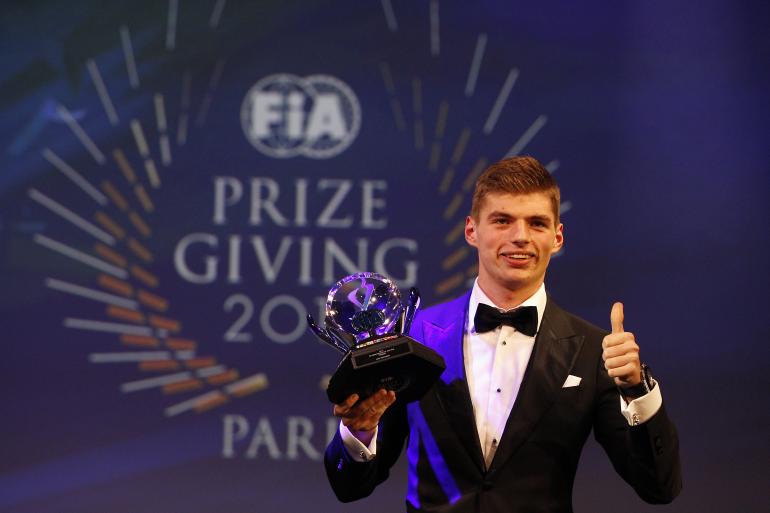 The Rookie of the Year award is decided by the FIA Drivers’ Commission, presided over by two-time World Champion Emerson Fittipaldi. The Commission, made up of drivers with a combined 12 World Championships and 14 Le Mans victories, forms a supremely qualified judging panel for the selection of the most impressive first-year driver in an FIA Championship.

Finally, in the category voted for by motor sport fans from across the world, Verstappen won the Action of the Year award for his daring move around the outside of Sauber’s Felipe Nasr at the fearsome Blanchimont corner during the 2015 Belgian Grand Prix. The pass clearly impressed fans, with the online vote seeing Verstappen take the award over nine other nominations, and by a ratio of 10:1 votes over second place, the FIA European Rally Championship’s Alexey Lukyanuk. It was actually the second consecutive Action of the Year win for Verstappen, who won the 2014 award while in Formula 3. It was an unprecedented achievement for the 18-year-old racer, who took this year’s FIA Formula One World Championship by storm.

“I am amazed and very happy to have won three awards this evening at such an important event, and at the end of only my first year in Formula 1,” said Verstappen. “It’s nice to win the Action of the Year for the second time, because I really enjoy overtaking on track. It’s a great honour to win the Rookie of the Year award, as it’s voted for by the Drivers’ Commission and I have to say, getting two fourth place finishes in my first F1 season is more than I expected. Personality of the Year? I’m not sure why I won that, but it’s nice to know the media like me!”.

The FIA Prize-Giving celebrates the Champions of the FIA’s various disciplines around the world, with this year’s event being held at the famous Lido theatre on the Champs-Elysées.