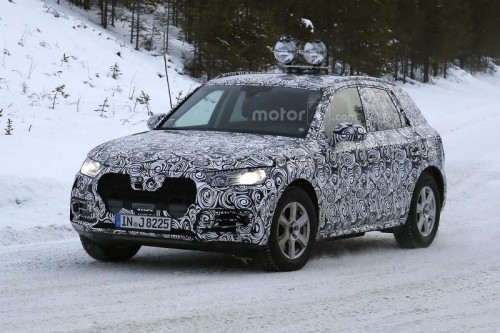 The model Audi Q5 is getting old so it is no wonder that the company decided to modernize a model. The other day car spy photos Audi Q5 2017 appeared online.

The testing of the car was happening in a cold weather. It became clear that a new Q5 model will also have a noticeable grille in front surrounded by headlights in an angular shape and the usual style air intakes. Also, we can notice mirrors mounted on doors, cambered fender flares, and a strong line of a shoulder. New crossover has an acclivous roof as well, together with a spoiler placed on a tailgate, and LED taillights. The car also seems to have a new dual exhaust system, which is designed in a very stylish way and inserted carefully into the back bumper.

In the base of Q5 there will be the same platform that lies in the A4, which means considerable savings in weight will be seen. There is no official information yet, but it is being said that crossover could lose approximately 100 kg. The engine variants will be represented by the ones in the A4 so there will be a lot of familiarities with that: there will be units of diesel and petrol with a 2.0 TFSI that generates 248 bhp and 370 Nm torque. Also there will be a version of a plug–in hybrid option with a row of about 48 km. Q5 will be presented next year. Its construction will take place in be José Chiapa plant in Mexico.