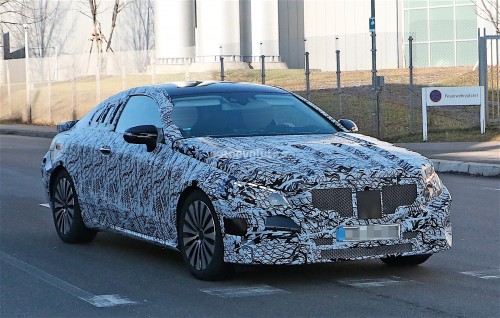 This week spies in Germany caught the prototype of a Mercedes-Benz Coupe. It is hard to say whether a new model is bigger than C-Class Coupe or smaller than S-Class Coupe, because its design is kind of similar to the S-Class, and has some bulging features as C-Class. Even though the car was camouflaged, on car spy photos Mercedes-Benz E-Class Coupe 2018 we can see that a new model has the same characteristics of style. Therefore, it looks very similar to C-Class Coupe. A new Coupe has the LED headlight and graphic taillight.

As the C-Class with two doors, the E-Class has acclivous rooftop, the windscreen abruptly declined, and the side windows of a less standing shape. The stylish “Bangle 6-Series” on the back was attached there in order to distract us. The design inside will be based on the E-Class sedan, so there will probably be the same dashboard and the cluster of instruments in a wide twin-screen.

The power trains will be represented in the following cylinder units: 4, 6, and 8. The engine will be a modernized option of AMG’s 4.0 liter double-turbo V8 that will produce 600 horses in the E63. The first model of the car will be introduced at Show in Detroit this coming January.