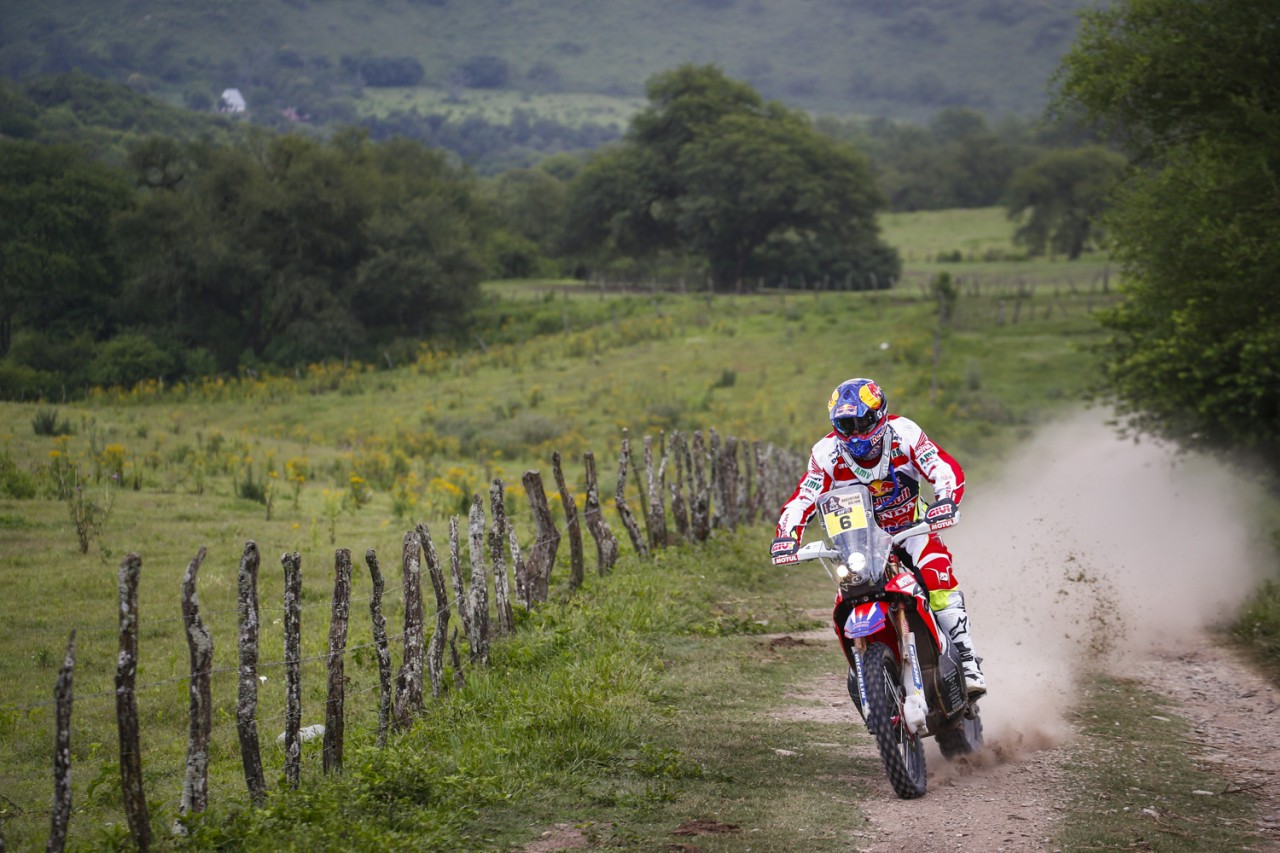 Spectacular third day at the Rally Dakar 2016: the stage through the mountainous Jujuy area ended with a Honda-filled podium and a once-again triumphant Joan Barreda back at the top of the general standings. The third stage of the Rally Dakar proved to be a dream day-out for the three Honda CRF450 RALLYs who occupied the entire Jujuy rostrum. Barreda scorched to the head of the course as team-mate Gonçalves closes in on the leaders.

Climate conditions continue to ravage race organizer’s plans in these first days of the Dakar. The heavy storms and downpours have failed to leave the zone of Tucumán with the first stage cancelled outright, the second reduced and today’s third stage also shortened to a total of 200 kilometres. Riders started out today from Check Point 1 (km 112,91) as race organizers opted in favour of a harmonious and uncomplicated day’s racing.

Joan Barreda gave a master class in how to deal with a complex stage and ascends once more to the top of the Dakar 2016 leaderboard. The Spaniard was lightning quick behind the bars and sharp as a blade as a navigator as he notched up the fastest time over the 200 kilometres of special stage. Barreda’s total Dakar victory tally now stands at 14.

Comrade-in-arms Paulo Gonçalves, who started ahead, also had a stormer of a day posting a third place finish just a minute off Barreda and behind Argentinean debutant Benavides. The Portuguese rider leaps to fourth overall place.
All the five Honda CRF450 RALLY bikes of Team HRC made it back to the bivouac problem-free. Barreda and Goncalves’ team-mates Michael Metge (France), Ricky Brabec (USA) and Paolo Ceci (Italy) finished the stage without conceding much time and all came in among the first thirty finishers.

Honda South America Rally Team continued to build on yesterday’s success with Argentinean Kevin Benavides proving to be a revelation with a second place finish tucked in behind the stage winner. Benavides lies in third in the general rankings. Adrien Metge finished 24th with Pizzolito losing a bit of time, but the rider will be looking to attack tomorrow. Brazilian Jean Azevedo, who fell heavily yesterday, was able to come back with a 45th place recuperating various positions.

Tomorrow, Jujuy will have a very decisive stage in store. The San Salvador de Jujuy loop will not be bringing the competitors back to the bivouac where the technical crew are housed. Instead, there will be the first part of the strict marathon stage where riders are forced to quarantine the bikes after the special stage. Only the riders themselves will be allowed to carry out any mechanical revisions or repairs. The following morning they will be handed back the machines in the same state that they were delivered to the parc ferme. Extra caution with the mechanics will be required.