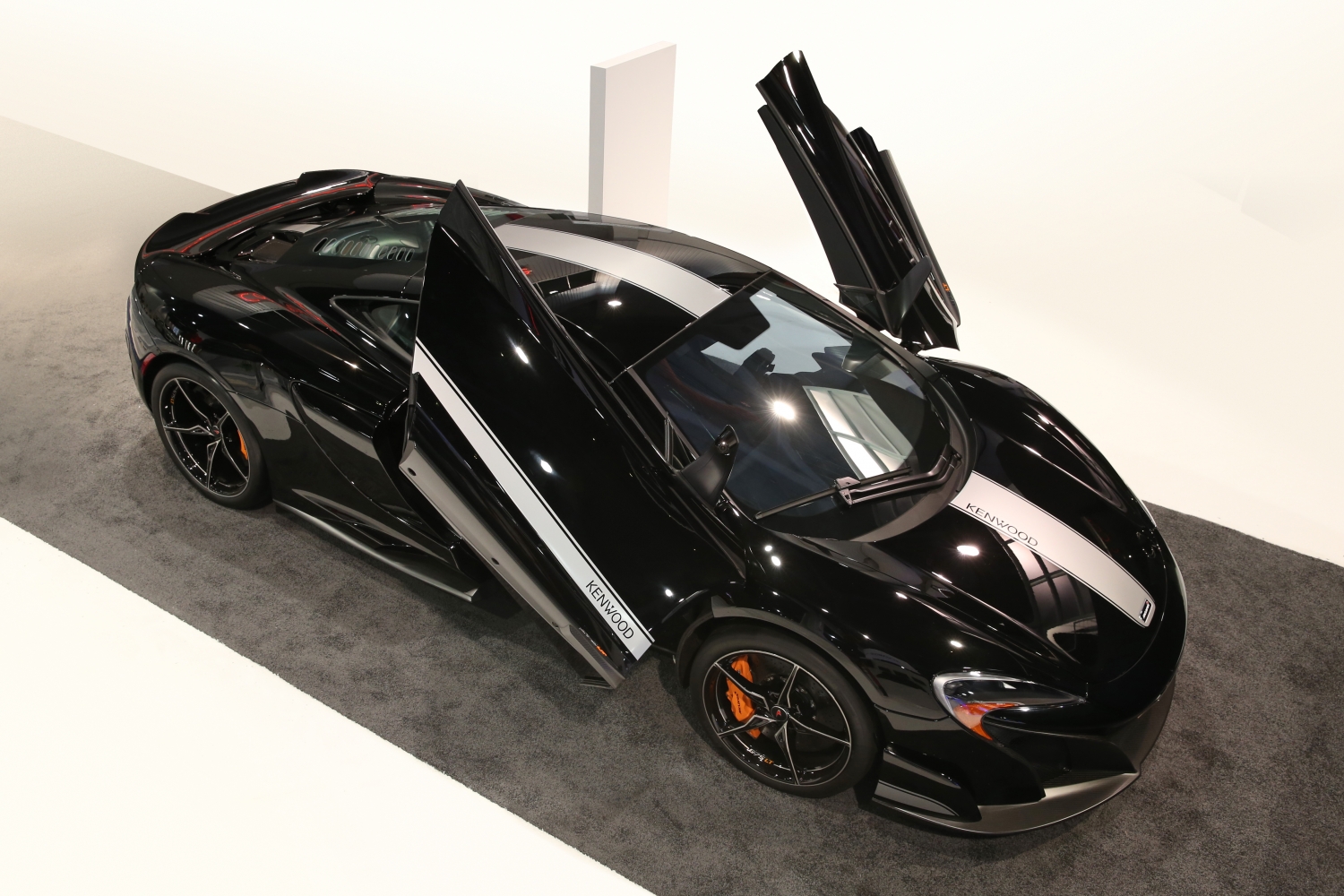 McLaren Automotive and JVCKENWOOD unveiled today an innovative design study, the McLaren 675LT JVCKENWOOD Concept, created for the CES 2016 consumer electronics show in Las Vegas, Nevada. The Concept is based on the new McLaren 675LT Coupe and features a host of new technologies and celebrates the 25th anniversary of their Formula 1™ partnership.

For its collaboration with JVCKENWOOD, McLaren began with a 675LT Coupe prototype vehicle.  The 675LT Coupe, which recently went into production at the state-of-the-art McLaren Production Centre in Woking, England, is the most driver-focused, lightweight and aerodynamically optimized model in the McLaren Super Series family.  Strictly limited to 500 units, all sold out within a matter of months.

To incorporate JVCKENWOOD’s technology, the team created a layered and panoramic yet purposeful interior using a mix of classic McLaren materials and innovative new fabrics.  The result is still recognizable as McLaren, but takes interior design a step forward.  Carbon Black Nappa Leather is used to finish the top of the bespoke dashboard, upper beltline and forward portion of the central floor tunnel.  A new Geometric Black Technical Fabric with a waxy grained finish to prevent reflections is applied to the area in front of the driver.  This is then positioned to appear as if it is floating by a strip of Satellite Grey Technical Fabric across the dash area and into the doors.  The usual center console is removed altogether with the air conditioning system, a delete option on the 675LT, to offer an even more spacious feel.  The steering wheel is borrowed from the most exclusive McLaren model, the track-devoted McLaren P1™ GTR, with the IPAS and DRS buttons

replaced by positioning controls for the Head-Up Display (HUD) with fighter plane inspired graphics. The HUD makes conventional instruments redundant, replaced by a vent framed by satin carbon fiber to provide cooling air directly to the driver.  A flash of colour is provided by Calypso Orange anodized vertical strakes, a color and material that also surrounds the steering wheel-mounted start/stop button.

Calypso Orange Nappa Leather is applied to the bolsters of the 675LT racing seats and to the armrests around the hip point.  These disappear out of sight once the driver is seated to give a focus on driving.  The orange accent chases the eye down through to the tunnel-mounted leg restraints. Further flashes of orange appear on the seat shoulders for the seat belt guides.  For the seat backs, centre of the tunnel and armrests, more Satellite Grey Technical Fabric is employed.  The seat centre and floormats, complete with 675LT logo, are covered in hard wearing Strata Ribbed Textile, a new material for this concept.  Above the driver sits the monitor for the Digital Rear View Monitor  (DRVM).  It has been integrated into the Carbon Black Nappa Leather headliner and framed with Deep Cobalt Blue stitching that continues back across above the driver and passenger.

The already dramatic exterior of the 675LT Coupe is little changed.  Key functional differences are the door-mounted rear view camera blades and third camera mounted above the rear number plate with its housing painted Palladium Grey.  More visible are JVCKENWOOD silver racing stripes that start from the front hood-mounted McLaren badge and continue over the roof to finish ahead of the Longtail Airbrake.  The stripes are also applied to each side of the 675LT where they disappear into the air intakes.  The silver contrasts against the Onyx Black bodywork and provides a visual link to the gloss black machined Super-Lightweight 675LT alloy wheels, as well as the part-grey theme of the interior.