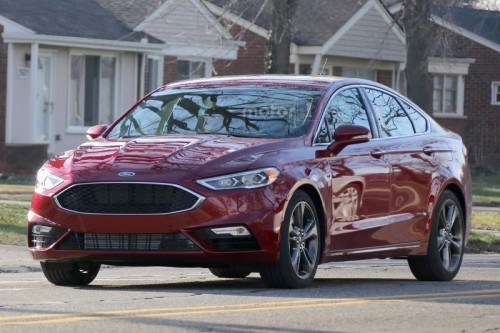 The new model of Ford Fusion will definitely be popular among the audiences who like to drive sedans of mid-size for an affordable price.

In addition, the automobile will have many power train variants, including hybrid, gasoline, and plug-in. The current Fusion version has been available for the purchase since 2013. During all this time Fusion’s rivals have been all refreshed and now it’s the time for Ford.

On the car spy photos Ford Fusion 2017, which were taken recently by spies when the car was being tested, Fusion was out of any camouflage. Therefore, it was possible to see all the changes and modifications done with an updated version. The grille became wider and got some kind of an aggressive design. The headlights’ shape was enhanced and at the back the lights

Great changes in the power train line are not expected, although it was heard that the sporty Fusion ST might be introduced to the public. The automobile will have 2.3 liter turbocharged 4-cylinder, according to some rumors. Some changes were also made to the interior of Fusion, like the swivel dial knob along with the newest version of the Sync 3 system will appear.