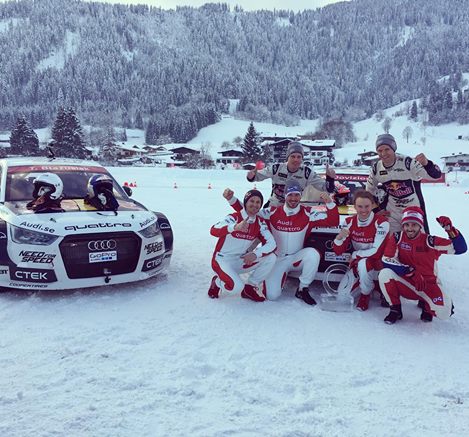 Audi ushered in the famous Hahnenkamm weekend in Kitzbühel with a new discipline. At the Audi quattro #SuperQ that was held for the first time, the leader of the Slalom World Cup, Henrik Kristoffersen (Norway), and MotoGP star Andrea Dovizioso (Italy) triumphed on Wednesday.

Four skiing aces and four other professional athletes accepted the challenge of the two-time DTM Champion Mattias Ekström to test his near-580-hp Audi S1 EKS RX quattro from the FIA World Rallycross Championship before the Hahnenkamm ski races. Two 367-hp Audi RS 3 Sportback cars were available as well for fast laps on a course of snow and ice specifically prepared by Audi for this purpose. Two athletes each formed a team.

Instructed by the two Swedish racing pros Mattias Ekström and Edward Sandström the sports stars battled each other and impressed initiator Ekström as well: “I was surprised to see how quickly these guys learned and the high level they drove on. However, sitting next to them in the passenger’s seat accelerated my heart rate pretty much.”

In the finale of the Audi quattro #SuperQ, Henrik Kristoffersen and Andrea Dovizioso won

by a narrow margin against slalom star Felix Neureuther (Germany) and Enduro rider Tadeusz Błażusiak (Poland). In the duel of the ski stars, Neureuther, following a mistake by Kristoffersen, was in front at the last gate, as was Dovizisoso among the motor racers. In the crucial shoot-out, the skiers were in the passenger seats of the race drivers. “That was scary,” said Kristoffersen. “Andrea accelerated when I’d have long started braking. All in all, it was a tremendous day that was huge fun. Driving such a car was an impressive experience. And it’s my first victory in Kitzbühel – maybe I’ll be able to repeat it in the slalom on Sunday.”

Similar enthusiasm was expressed by Felix Neureuther, who in the semi-final won against his continuous Austrian rival Marcel Hirscher. “I already had the opportunity to try out the S1 here last year,” said the German. “But racing each other in such cars is awesome – especially on a track where you can go flat-out. It was an incredible experience that I’m very thankful for to Mattias (Ekström) and Audi. I hope there’ll be a SuperQ every year from now on!”

For the two ski stars Marcel Hirscher (Austria) and Ted Ligety (USA), freestyler Jon Olsson (Sweden) and street trial pro Danny MacAskill (Great Britain) the #SuperQ ended as early as in the semi-final. In spite of this, they all were obviously equally thrilled about this new discipline. “I could do that every day,” said Jon Olsson.