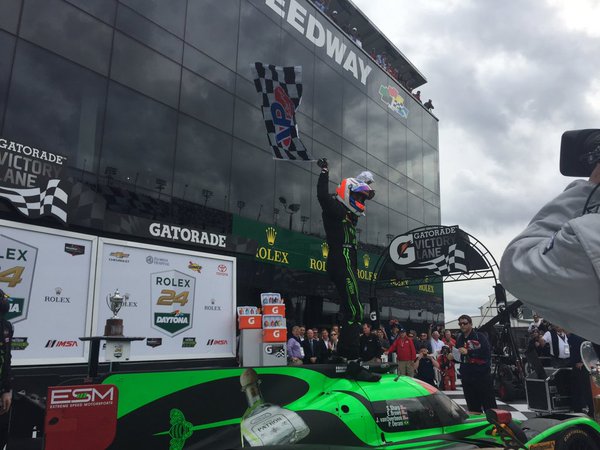 The Extreme Speed Motorsports Ligier squad claimed the first victory for an LMP2 car in the Daytona 24 Hours. The ESM Ligier-Honda JSP2, shared by Pipo Derani, Johannes van Overbeek, Scott Sharp and Ed Brown, took the overall win by 26 seconds ahead of the Wayne

Taylor Racing Dallara-Chevrolet Corvette DP driven by Jordan and Ricky Taylor, Max Angelelli and Rubens Barrichello. The ESM car, run in conjunction with OAK Racing, moved back into the lead after Derani took over from van Overbeek with two hours and 10 minutes of the opening round of the IMSA SportsCar Championship to go. The Brazilian, taking part in his first race with the team for which he will contest this year’s World Endurance Championship, was then able to close down the WTR Dallara to take the lead in the penultimate hour.

Confetti is flying for @PatronESM! Winners of the 2016 #Rolex24 pic.twitter.com/apsYXJbuUX

Jordan Taylor briefly came back at the leader after Derani went for a double stint on his Continental tyres, but he was able to extend his advantage after the last round of pitstops. Taylor had to climb out of the car courtesy of a problem that was sending exhaust fumes into the cockpit. Angelelli took over for the run to the flag and has been taken to hospital for tests after pulling over after the finish

Derani said: “I have no words. It is just amazing to win my first race in America.” The ESM car and the identical Michael Shank Racing entry had a pace advantage over the Daytona Prototypes that Derani was able to exploit as the race drew to a close. Shank looked to be the favourite for race honours until Oswaldo Negri Jr pulled out of the lead with engine failure in the 10th hour. The Spirit of Daytona Coyote-Chevrolet Corvette DP came third home third, a minute behind the WTR car in the hands of Ryan Dalziel, Marc Goossens and Ryan Hunter-Reay. Hunter-Reay was the last driver to finish on the lead lap, the Action Express Coyote-Chevrolet finishing five laps down in fourth.

Alex Wurz finished fifth in what he has said is his final motor race, the #01 Chip Ganassi Racing Riley-Ford EcoBoost DP losing four laps on Sunday morning with what the team described as a temperature problem. The DeltaWing-Elan/Mazda DWC13 led the race in Katherine Legge’s hands, but the car failed to finish after an unsighted Andy Meyrick crashed into a stationary Prototype Challenge car in hour four.

The pole-winning Nissan-engined BR Engineering BR01 finished down in 38th position after three stops to solve a braking problem. The factory Chevrolet Corvettes finished 0.034s apart at the head of the GT Le Mans field after thrilling climx to the race. Antonio Garcia set a series of fastest laps aboard the Corvette C7.R he shared with Jan Magnussen and Mike Rockenfeller as he closed down on team-mate Oliver Gavin. The Spaniard briefly passed the leader around the outside into Turn 1 with two laps to go, but ran wide and allowed Gavin to retake the advantage and secure the win for himself, Tommy Milner and Marcel Fassler. Third place went to the factory Porsche 911 RSR of Earl Bamber, Frederic Makowiecki and Michael Christensen.