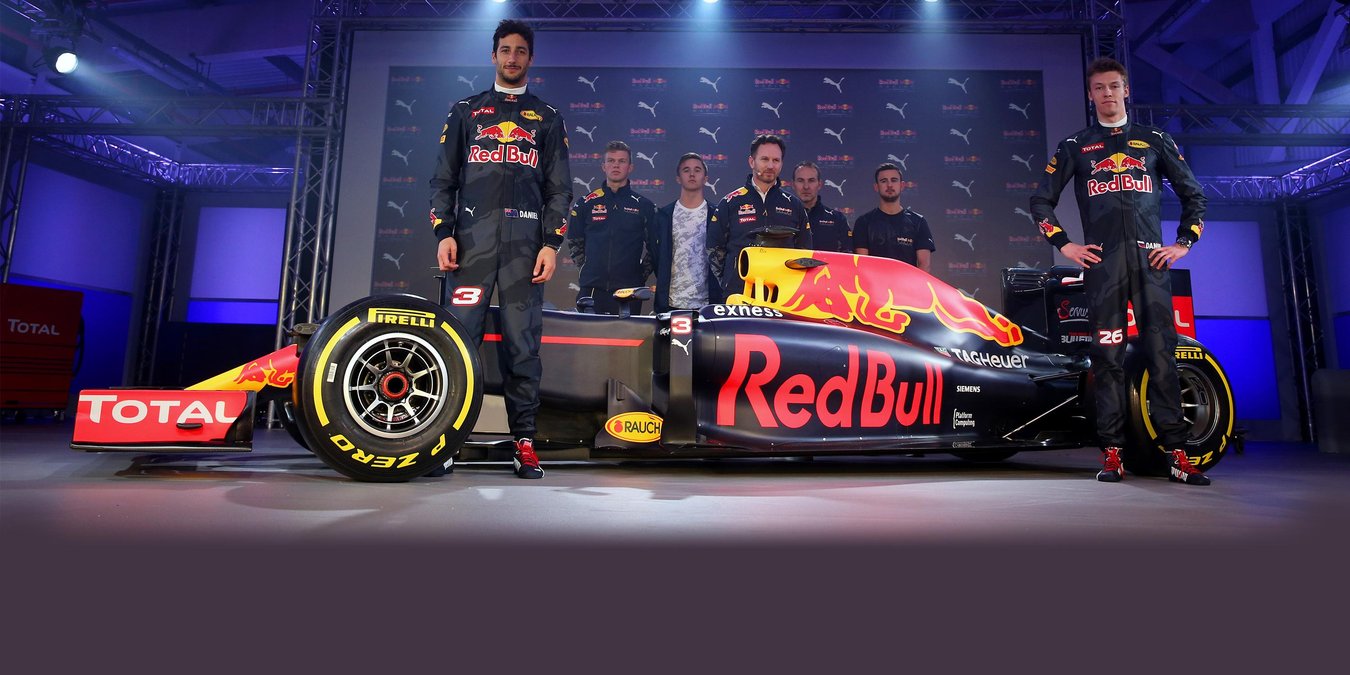 and the squad itself. Deep in the heart of achingly fashionable east London, the team launched a new long-term partnership with Puma by unveiling striking new racewear and team kit, as well as a radical new livery, which will adorn the new RB12. Out goes the gloss and in comes a tough new matt finish as well as eye-popping fluoro on the Red Bull logo and sidepod lettering. If it was a superhero, it would be less classic Batman and more Dark Knight Returns.

“Over the years we evolved a certain look but with the clean sheet of paper we had this time we decided to do something very different,” said Christian. “It’s innovative and aggressive. I think it will stand out on the grid and hopefully it will stand out in the mirrors of a few other cars. It looks right and things that look good tend to go well, so hopefully we’ll see that on track.”

On hand to give the new livery its debut were Daniel Ricciardo and Daniil Kvyat and commenting on the new livery, Daniel said: “The car looks amazing. Normally drivers are more concerned with how it actually performs but looking at this I think it should be good.”

Asked about how prepared his drivers are for the new season, Christian laughed and said the pair had done “bugger all” during the winter, to which the drivers had little response. “You do train a lot,” said Daniel, “but, yeah, there is a bit of a wait between the end of a season and Melbourne, so now I’m just hanging out to go racing again.”

Before the car made its onstage appearance, the covers were pulled back off a fake car to reveal a troupe of dancers who put on a stunning performance to debut Puma’s new range of teamwear, team kit and replica wear. The new look kit is the result of a close collaboration between the team and the sportswear giant, with Puma’s Global Director of Brand and Marketing Adam

Petrick saying that the new collections are the result of solid year of planning.

Christian added that the collaboration on new technologies would continue into the future. “You’re looking to save grammes of weight anywhere we can,” he said. “You’ll see that on modern race suit there’s no embroidery anymore, everything is printed. We continually look for performance gains and we’ll be looking to push these guys to advance the technology wherever possible.”