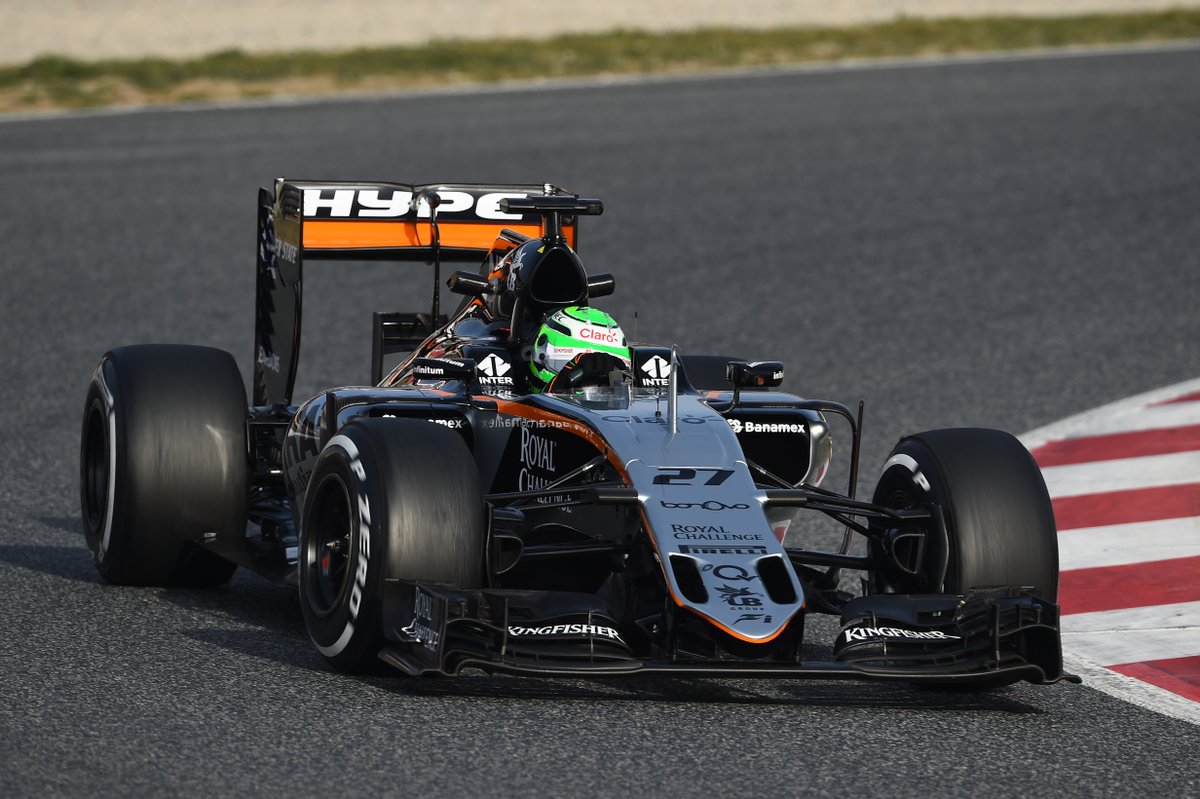 Nico Hulkenberg and Force India ended Ferrari’s domination of pre-season Formula 1 testing on a troubled first day of 2016 running for Kimi Raikkonen, as Romain Grosjean put Haas second. Hulkenberg comfortably topped the Barcelona timesheet with a morning lap of 1m23.110s set on the super-soft compound. That was exactly three tenths of a second shy of the week’s best lap, set by Sebastian Vettel on Pirelli’s new ultra-soft on Tuesday. While Vettel covered 195 laps as he topped the first two days, Raikkonen managed just four installation laps on Wednesday

morning, without a time to his name, while Ferrari completed a number of fuel-system checks. The Finn at least fared better in the afternoon as he clocked up another 73 laps, with his best on the medium compound moving him up to second behind Hulkenberg, albeit 2.867s adrift. He was then demoted to third when Grosjean put in a lap one tenth quicker during a late run on a set of softs for newcomer Haas.

After two difficult days for Jolyon Palmer and Renault, with software issues on Monday and a turbo failure on Tuesday limiting him to just 79 laps, team-mate Kevin Magnussen posted 103 on his way to fourth quickest on his return to F1. While positive for Renault, there are still issues to contend with. Magnussen stopped on track due to an unspecified problem with an hour of the day remaining. An attempt to send the Dane back out with 15 minutes to run resulted

in him stopping near the end of the pitlane. Magnussen’s initial issue brought out the third red flag of the day, the first having come in the opening hour when Carlos Sainz Jr was forced to stop his Toro Rosso due to his right-rear wheel not being attached.

Sainz went on to complete the second highest number of laps in a day this week with 161, finishing just over three seconds down on Hulkenberg in sixth. Nico Rosberg sandwiched Magnussen and Sainz as he split the day’s driving duties for Mercedes with reigning champion Lewis Hamilton. After posting 172 laps on Tuesday, Rosberg added a further 74 on Wednesday morning, with Hamilton following up with 87 in the afternoon for eighth quickest. Mercedes is still yet to use anything other than the medium tyre.

Felipe Nasr was seventh in the 2015 Sauber, 3.282s behind Hulkenberg and a fraction of a second ahead of Hamilton. In his first 2016 outing for Red Bull, Daniil Kvyat was ninth, 0.076s behind Hamilton, and 0.215s ahead of Felipe Massa as the Brazilian took over Williams driving duties from Valtteri Bottas and ran for 109 laps. Jenson Button only managed 51 in his McLaren. A minor fire caused by a hydraulic leak ended his day early and left the veteran nearly four seconds down. On his debut as fully-fledged F1 driver, Rio Haryanto brought up the rear, 5.139s off the pace. The Indonesian also spun in the morning to bring out the second red flag.