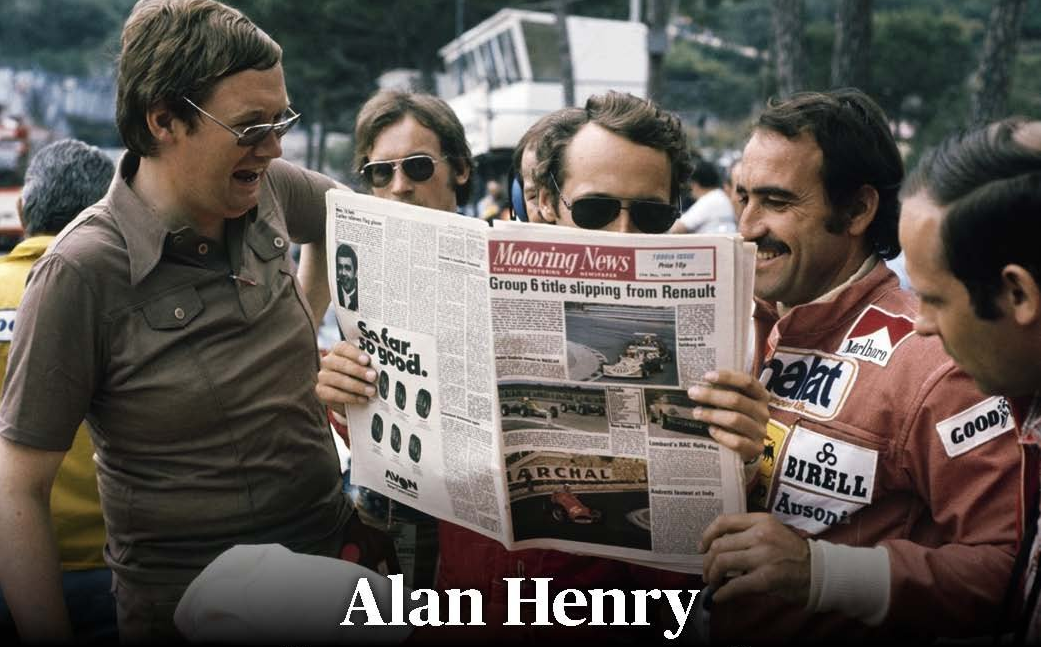 amazing to think that on the day Nico Rosberg was born I’d just stepped off a flight from Detroit where his Dad had just won the USGP.

Sounds like toys out of the pram time at Red Bull after the first Jerez. Remember, the one thing worse than losing is how you handle it!

Alan Henry, or AH as he was known to all in F1 circles, one of the leading British reporters  in Grand Prix racing in the course of the last 45 years, has died at the age of 69. Alan grew up in Essex, fascinated by fast cars and dragged his mother with him to Brands Hatch in 1964 to

watch the British Grand Prix. His father wanted him to be a solicitor, but he had no real interest and was drawn increasingly to motorsport, mainly thanks to the writings of Denis Jenkinson in MotorSport. Like others of his generation he started out marshalling at races and in 1968 wrote to Autosport, complaining about a report written by another correspondent. Autosport responded by asking him to write about a meeting of the Romford Enthusiasts Car Club meeting and AH’s first report was the day that Jim Clark died at Hockenheim. He joined Motoring News and climbed the ladder to F1 with a generation of drivers that included Niki Lauda, Ronnie Peterson and others. Alan lived through the deaths of a string of drivers whom he considered friends.

He would later became the F1 correspondent of The Guardian, Grand Prix editor of Autocar (where I succeeded him) and for many years was the editor of the annual Autocourse. A larger than life character, AH also wrote a string of books about the sport that he loved and to which he dedicated his life. These included Ferrari: The Grand Prix Cars in 1985, which won the Pierre Dreyfus Award from the Guild of Motoring Writers. I worked with Alan for many years in different roles. He wrote some of the http://www.grandprix.com encyclopedia for me and I worked for him with Autocourse. We regularly exchanged information and I gave him all my files for a book about racing circuits. He was simply a good bloke and an astute journalist.  A friend to many in the F1 Paddock, Alan was close to many drivers and team owners, notably Niki Lauda and Ron Dennis of McLaren.

“I have known Alan Henry for more than 40 years, and, as the decades rolled by, he and I became good friends,” Ron said. “As a journalist he was knowledgeable, accurate, intrepid yet fair-minded, and as a man he was warm, kind, loyal and always funny. Known throughout motor racing circles as AH, which was how his Motoring News race reports were signed off in his early days, before the culture of the byline, he will be much mourned by Formula 1 insiders, fans and of course fellow journalists alike.  Most of all, he will be hugely missed by his devoted wife and family, to whom on behalf of all at McLaren I extend condolences. AH RIP.”

Henry’s life was filled with wonderful stories and his autobiography The Last Train From Yokkaichi is a tragic-comic story of life in the world of F1. Farewell, AH.