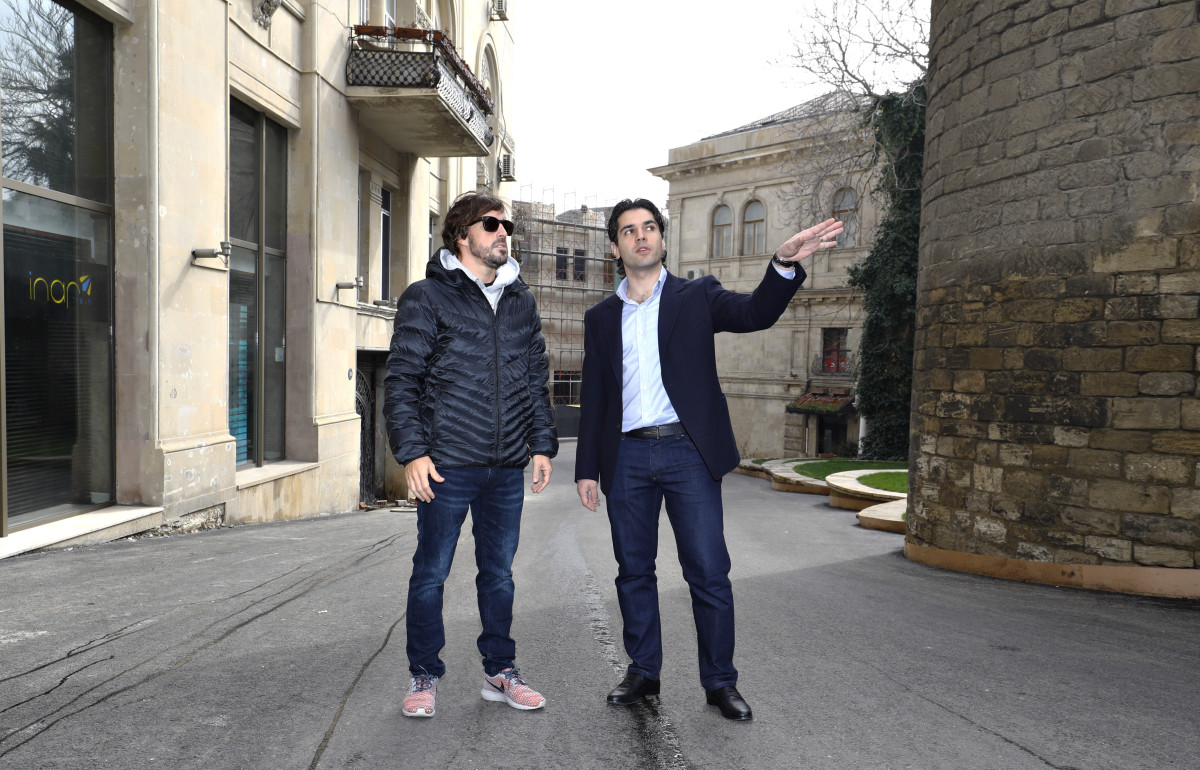 Two-time F1 World Champion and current McLaren-Honda driver, Fernando Alonso, today visited Baku as part of his new role as the Official Ambassador for the 2016 FORMULA 1 GRAND PRIX OF EUROPE. He began his stay in Baku by immediately taking a tour of Baku City Circuit (BCC), F1’s newest street circuit, and inspecting some of its key features.

In doing so, Alonso becomes the first F1 driver to visit the city and study the latest addition to the sport’s calendar in person. Today’s tour – taking place exactly 100 days before the arrival of F1 on Baku’s streets –  allowed him to see for himself how much progress has already been made along the track’s route, as Baku City Circuit (BCC) continues its daily preparations to ensure the street circuit is operational in time for F1’s arrival in Azerbaijan this summer.

As part of this morning’s ‘track walk’, Alonso was shown the soon-to-be home of the Paddock and site of the Pit Lane, located right in front of Baku’s magnificent Government Building, where construction work on the two-story Pit Lane building is already underway. The McLaren-Honda driver also got the chance to examine what is sure to become the iconic image of the 2016 FORMULA 1 GRAND PRIX OF EUROPE – the 7.6 metre narrow, uphill, winding sequence of turns  (T8-T11) by the city’s Old

Town walls.  His tour also took in Turn 18, where cars will race past the Maiden Tower, Baku’s ancient defensive structure, as well as the ‘dual carriageway’ section of the circuit. Finally, he was also taken to the circuit’s main straight along Baku’s picturesque seaside boulevard, where cars are estimated to hit speeds of up to 340 km/h as they race towards the finish line.

Speaking at a specially arranged press conference to welcome him today, Alonso spoke of his first impressions of Baku and the new circuit: “It’s a real honour for me to be the first F1 driver to visit this magnificent city. The welcome I have received from everyone since my arrival has been wonderful. I have been really impressed with everything I have seen today. I feel absolutely confident in saying that Baku City Circuit is going to be the most memorable circuit on the F1 calendar this year. Much like this beautiful city, it successfully manages to showcase its modernity with a lovely nod to the past. Indeed, the way the track stretches along the Old Town walls with the magnificent Flame Towers in the background is a clear

example of this! On a technical level, I am excited to test my skills on such a challenging circuit, in particular along those tight, winding corners. I really can’t wait to race here this summer.”

In addition to his track inspection, Alonso will also spend the rest of his time in Baku engaging with local fans in a series of events being staged across the city today and in particular with the many 2016 FORMULA 1 GRAND PRIX OF EUROPE Volunteers and Marshals who are currently undergoing their training ahead of F1’s arrival in Baku.