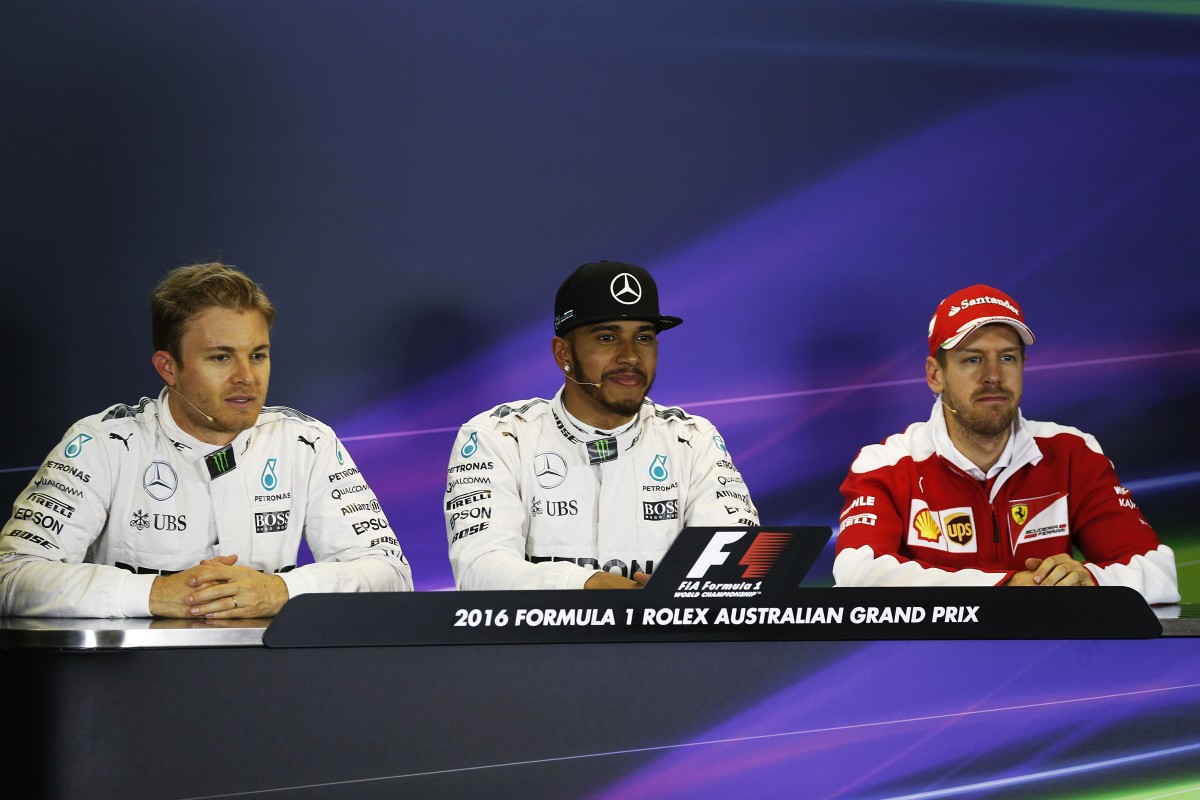 Lewis, your 50th career pole, only Senna and Schumacher have gone beyond that mark, on top of it all weekend it would seem, through practice and qualifying, you must be delighted?
Lewis HAMILTON: Absolutely. First, I really have to… I’m not going to take my hat off, but really take my hat off to this team. What they’ve done to raise the bar once more in our third year to be fighting the rest, it’s just… truly for me, it inspires me, it motivates me and I really enjoyed driving the car today in qualifying. We got the set-up just right. There were some sexy laps. They felt so good. Just flowing and no real mistakes and that’s really all you can hope for as a driver is to always improved and that’s what we did today. Really happy.

Nico, turning to you, the heat was on you, certainly towards the end. A couple of mistakes in Turn One, both on your first run in Q1 and also in Q3, just not your day today?
Nico ROSBERG: No, the last lap was good, just Lewis did a better job, that’s it. But mainly it’s impressive to see how the team in the third year running now, it seems, of course it’s very early days, so let’s be careful but for sure this weekend we seem to be the quickest out there by a good margin. It’s amazing to see that. Because the risk is always when you’re dominating that you start to become complacent and that’s a big risk always, everybody has experienced that, but it seems that we’re able to push through and so that’s really awesome. Of course, not happy with second place but still a lot of opportunities for tomorrow starting from second.

So Sebastian, we now have a bit of a picture: it looked close in free practice three, you split the Mercedes after the first run in Q3 but ultimately the margin is still pretty large to Lewis. You used up your tyres earlier on than they did as well, so is your feeling sitting here now one of disappointment?
Sebastian VETTEL: Not really. I think I said many times that we have done a step forwards, which I think we have. I think especially tomorrow we should be quite a bit closer. We expected them to be strong in qualifying, which they were. I think we had a bit of a rougher start to find a bit the rhythm, certainly I had, and it was just getting better throughout qualifying. Very happy with the lap I had in the end, so we called it there and saved the set of tyres for tomorrow. Surely we’re not on the front row but we still have high hopes for the race and it’s going to be a long year, we know this car has a lot of potential, so I think as a starting out third and fourth, locking out the second row, is a good achievement. The team’s been pushing very hard and as I said we have a long year ahead of us.

Back to you again Lewis. Obviously the race tomorrow, you’re looking for your third Australian Grand Prix victory. Do you do so with a bit of calmness this evening as you prepare?
LH: I’m generally, quite often, mostly calm, but there is a lot of work to do tonight. Obviously with these radio changes and less communication there’s a lot more studying that goes on for all of us in terms of remembering the sequence, things like we can’t be told if the strategy is changing throughout the race, so you kind of have to anticipate what happens. If they give us a different tyre we kind of have to guess it – could be a two, three, whatever stops we’re doing. I’m excited. I think it’s a new thing; we’re all in the same boat. I hope that it adds to the spectacle tomorrow, I highly doubt it, but we shall see.

Q: Lewis, your fifth pole in Australia, you talked a moment ago about having done some sexy laps. What is the key to a really good lap here in qualifying and did the format with the elimination and particularly all the traffic there at the beginning, did any of that put any more pressure on you today?
LH: Not really, it was very much the same as usual. You have to go out and get your clear laps. Maybe there was a little bit more pressure on us as a team, and the way we operated but generally we just did the normal in terms of getting the laps. What I mean by sexy laps, they were just, when you finished… the car felt good, moved, it was like a beautiful rhythm. Felt like James Brown at the end of the lap.

Q: Nico, coming to you, obviously we’ve got a bunch of new rule changes this year, Lewis just referred to the radio change in his previous answer. The third one of course is the option of more tyres going into the race. Now, clearly that’s a strategic thing, you’re the guy who needs an extra something to work with. Do you see it giving you an opportunity to do something on strategy tomorrow?
NR: For sure, because there are going to be more unknowns in the race tomorrow, definitely. If Lewis gets a start, after that, if they have to change his strategy because of traffic behind or something, that he’s going to drop out into, he won’t know about it. So, that’s for sure, there’s scenarios where you can lose out quite a lot. And, of course, starting second, I like that. It increases the chances, y’know?

Q: Essentially the same question to you Sebastian. You mentioned earlier on about your tactic in terms of the tyres. You’ve got more variability, there is less information coming to you from the team, are you sitting there thinking you have a chance to get among these guys tomorrow?
SV: I do. Not because of the changes in rules but in general I think in the race you can always creating something. Tomorrow we try obviously to push very hard and create something. Everybody knows roughly what to do. It’s not the first race that we’re going to do. Bottom line is that the regulations haven’t changed so the cars are similar to drive compared to last year. Hope that we can put definitely more pressure than today on both of them in the race tomorrow.

Q: (Ralf Bach – Auto Bild motorsport) Question to Matteo, how does it feel to drive a Mercedes car?
Matteo BONCIANI: Next question

Q: (Daniel Johnson – The Telegraph) To all three of you: so we had the new qualifying system today and for most of Q3, what we saw on the TV was guys sat in the car and then getting out without going and doing a lap. Nico and Lewis, the two of you went out and did some laps and then with three minutes left, came in the garage and nothing more happened and the chequered flag waved with no one out there. Christian Horner’s already said that he thinks F1 should apologise to the fans for the show it’s put on. Toto, your boss, said it’s rubbish. It’s difficult when you’re in it but I wondered what you thought of it, whether F1 should apologise and whether we should go back to the old system as soon as we can?
LH: Well, we’ve not seen it so we don’t really know how it worked for the others. We said at the beginning that it wasn’t the right way but it’s like you can’t knock it before you try it. We tried it and all the engineers were right. It doesn’t make no difference to me at the end of the day. I did what I had to do.
SV: I had time to get changed…
NR: It’s good that F1 tries but it’s the wrong way so we should go back to the other system, for the fans.

Q: For the whole three sessions or just the final part?
NR: For the last one especially, I’m not really able to judge for the previous two, but especially for Q3.
SV: Well, I think it’s very easy. I don’t see why everybody’s surprised now. We all said what’s going to happen, it happened so obviously we were told to wait and see but now we saw and I don’t think it was very exciting. It was a bit crazy in the beginning with all the cars pushing and trying to do a lap before they get potentially kicked out so managing traffic… it’s quite busy but for no reason because the time is there in the session to do it and in the end, also for the people in the grandstands, I don’t feel it’s the right way to go. There are no cars to watch. In the end they want to see Lewis, Nico, Kimi, whoever, pushing it to the limit at the end of the session when the track’s supposed to be at its best etc. I don’t know we need the criticism now, we had the criticism already but it’s surely the wrong way to go, that’s what we said.
LH: The good thing is that they tried something new and ultimately that is a good step, that we’re actually trying something new  but it’s trial and error so maybe not just go back to the old way…
SV: There’s a certain responsibility as well. We can’t just try things that many of us criticise, us included.
LH: But why can’t you…
SV: You can’t just turn around and say it was the wrong thing, we need to be sensible and try to do the right changes.
LH: But that’s what they tried to do even though everyone told them it was the wrong one.
SV: Yes.
LH: Let’s leave it there.

Q: (Michael Schmidt – Auto, Motor und Sport) Sebastian, did you sit in the pits at the end because you didn’t have any more supersoft tyres or because you said you wanted to save a set of tyres? But when we went through the sessions I think you have already consumed three before.
SV: Yeah, it’s true, we had to go out again in Q2 so I think the fact that we called it off in Q3 was due to the fact that I had a good lap on the first try and we wanted then to save a set of tyres for tomorrow. Obviously, we would have liked to do it with only one run in Q2 but it wasn’t strong enough so I had to go out again, so that’s a fact, it was not due to the new format but I think in general, as I said earlier, it’s just wrong when the clock’s ticking and nobody’s on track.

Q: (Heikki Kulta – Turun Sanomat) Nico, did it ever cross your mind that the chain of six pole positions was broken today and does it means anything to you?
NR: No, I hadn’t thought of that but yes, a pity but that’s not on my mind when I’m going out and qualifying for the first race of the season, for sure not.