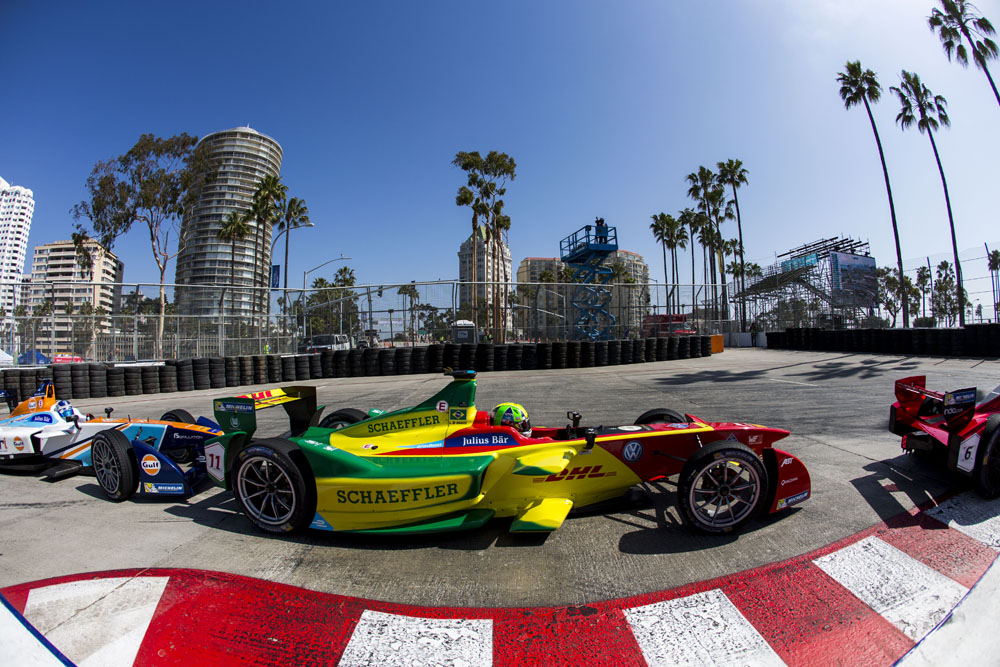 Redemption came to Lucas di Grassi in the shape of a perfectly-judged win in the FIA Formula E Faraday Future Long Beach ePrix. The Abt Schaeffler Audi Sport driver had sprayed the victory champagne at the last race in Mexico City, only for the disappointment of disqualification to hit home long after the bubbles had fizzled out. But with a steely determination to take advantage of any opportunity that would come his way

in the fight for the 2016 FIA Formula E Championship, di Grassi produced a drive of genuine quality.

From pole position, it was DS Virgin Racing’s Sam Bird who led in the early stages of the race, but di Grassi kept him in his sights, and when he managed to get a better run down the back straight he pulled a great move on the Brit into Turn 5 to take the lead. Bird managed to keep on di Grassi’s tail through the mid-race car change, but in his second car he was caught out by cold brakes and locked up into Turn 5, sending him down the escape road. He managed to avoid any serious damage, but lost a hat full of places and any hope of victory.

Di Grassi now had a comfortable lead over Venturi’s Stephane Sarrazin, only for all of it to be wiped out when last year’s winner – Nelson Piquet Jr – crashed over the kerbs at the first chicane and walloped into the wall. The Qualcomm Safety Car was required to retrieve his stricken NEXTEV TCR machine, handing Sarrazin an unexpected shot at the win. But di Grassi timed the restart to perfection and cruised home for his second win of the year. With Sebastien Buemi suffering a disastrous race – he collided with Robins Frijns, which not only damaged both cars so badly they were forced into making an early car change, he then received a drive-through penalty – di Grassi has taken o

ver the lead in the points standings he lost along with his Mexico win.

“I’m very happy to show that if you keep your focus, keep up your work, good results come,” he said. “From the outside races always look comfortable, this is a tricky track, it’s very easy to do mistakes, it was an extremely difficult race. Stephane was quick and was putting pressure on me. It’s an extremely difficult car to drive on the edge so we had no comfort in winning the race, we just had to focus on making no mistakes.”

For Sarrazin second place was his first podium finish and keeps up his record of scoring points in every race so far this season. “It’s amazing that since last year we have been quick but never on the podium,” said Sarrazin. “It was a very good race and we’ve improved a lot. The team has come from zero – it was completely new – so we are very happy with the car and the total package, and it was a good result.”

Third place fell to Daniel Abt, ensuring Abt Schaeffler scored its first ever double podium. The team piled on to the huge podium stage, where a sizeable chunk of the 17,000-strong crowd was on hand to give the drivers a fantastic ovation. “I love California and I knew that coming here we would be strong,” said Abt. “I set the overall fastest lap today in FP2, but it didn’t quite work in qualifying, so I was a bit disappointed coming into the race. In the race I tried to stay cool while others around were making a lot of mistakes, and that helped me a lot. This result was so important for the team and our first double podium is for them.”

Fourth and fifth place for Nick Heidfeld and Bruno Senna meant it was the biggest ever points haul for Mahindra, while Bird was left ruing his error in sixth. Mexico City race winner Jerome D’Ambrosio received FanBoost for the first time in his Formula E career (di Grassi and

Heidfeld were the other recipients), but it was a low-key race for the Dragon Racing driver, who finished seventh, one place ahead of his team-mate Loic Duval.

The final two points places were filled by maiden top-10 finishers. Simona de Silvestro became the first female driver to score points in Formula E with a strong drive to ninth place for Andretti, while Mike Conway opened his account for Venturi by claiming a single point in 10th. Buemi did manage to salvage something from the race by setting the Visa Fastest Lap and the two bonus points it brings, but for him and the Renault e.dams team it was a race to forget. They will now be re-doubling their efforts and hoping to get back on the front foot as the series heads to their home race – the inaugural Visa Paris ePrix – which takes place on April 23.