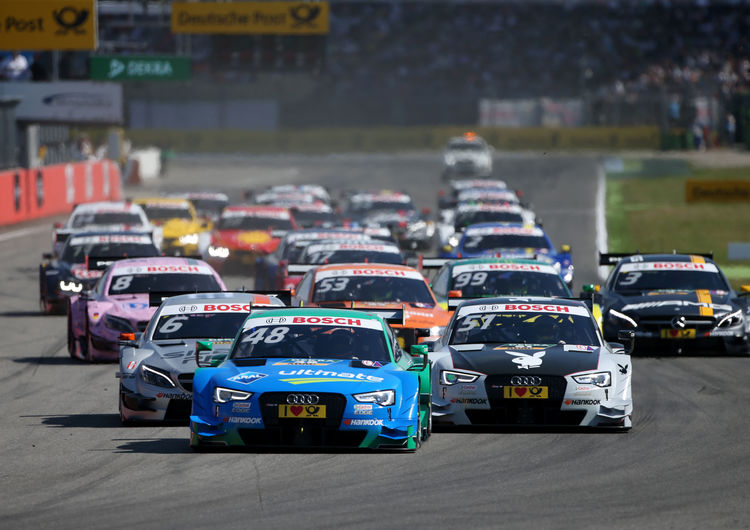 Edoardo Mortara is the first winner of the 2016 DTM season. The Italian from Audi Sport Team Abt Sportsline kept his cool in the heated battle of the DTM season opener and gave Audi Sport its sixth DTM triumph in succession at the Hockenheimring.  The Audi RS 5 DTM in the DTM remains the car to be beaten. With four cars in the first five positions on the grid Audi Sport had created an optimal starting base for the first race of the year. Youngster Nico Müller in the Playboy Audi RS 5 DTM shone on clinching his first pole position in his brief career and an unusually large advantage of more than two tenths of a second. Edoardo Mortara in the Castrol EDGE Audi RS 5 DTM ensured that two Audi drivers started from the front row.

The preliminary decision was immediately produced on the first few meters. While Mortara on the inside managed an optimum start, Müller did not perfectly get off the line. The Swiss initially dropped to second place and, subsequently, behind Robert Wickens (Mercedes-Benz), to third place, which he went on to defend up to the checkered flag. This meant that he immediately achieved his goal for the season – the first podium in the DTM – in the first race of the year.

Edoardo Mortara instantly managed to pull clear of the front of the field and to extend his advantage, in spite of several yellow periods in a hectic race, to a little more than two seconds. Afterwards, he controlled the pace and in commanding style went on to bring home his fourth DTM victory in total. “A dream result,” said the Audi driver. “I’m very happy for the whole team and my new race engineer, Nicola Palarchi. I’m not in the best of health at the moment, so this success is all the more fantastic. My Audi RS 5 DTM was simply perfect today.”

With Mattias Ekström (Red Bull Audi RS 5 DTM) in ninth place and Miguel Molina (Teufel Audi RS 5 DTM) in position ten, all four drivers from Audi Sport Team Abt Sportsline scored points on Saturday. Ekström and Molina were involved in wild position battles, in which Ekström’s car in particular was severely damaged, nearly throughout the race.

For Audi Sport Teams Phoenix and Rosberg on the other hand the season opener proved disappointing. Timo Scheider (AUTO BILD MOTORSPORT Audi RS 5 DTM) and Adrien Tambay (Speedweek.com Audi RS 5 DTM) became entangled in collisions shortly after the start and were forced to retire at an early stage. Mike Rockenfeller’s (Schaeffler Audi RS 5 DTM) 100th DTM race, following several incidents of contact, ended early after just four laps due to a damaged suspension. Jamie Green (Hoffmann Group Audi RS 5 DTM) was forced off track in the hectic early stage. A drive-through penalty caused the championship runner-up to lose further ground. In the end, he had to settle for 15th place.

“Congratulations to Edo (Mortara) and Nico (Müller) who were extremely strong today,” said Dieter Gass, Head of DTM at Audi Sport. “We worked hard in winter, but didn’t know where we really stand. That makes starting the season so successfully even sweeter for the whole squad. The fans, too, got their money’s worth today. There was plenty of action, gripping duels and overtaking maneuvers. That’s exactly what we intended to achieve with the changes to the regulations”.