Ecclestone presents his trophy to F1 in Schools champions 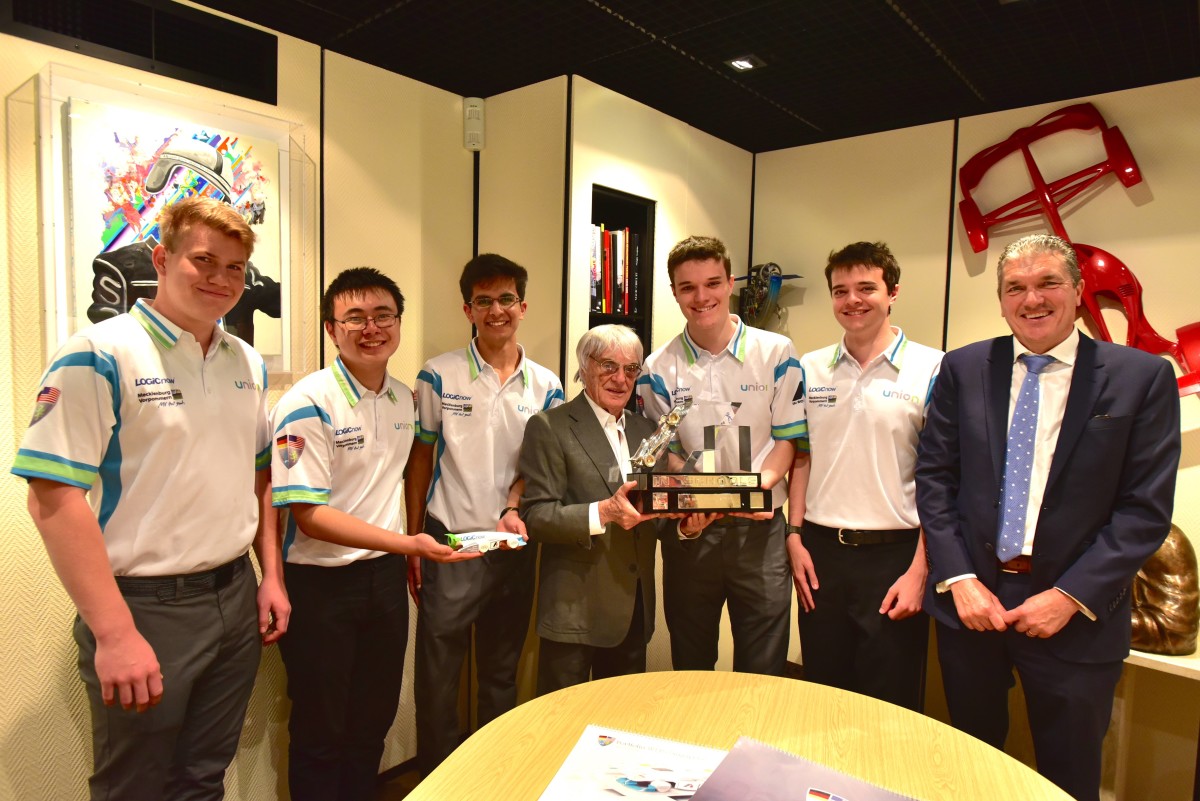 Union Racing International, the F1 in Schools World Champions 2015 from schools in Germany and USA, travelled to London this week to meet with Formula 1 Group Chief Executive, Bernie Ecclestone and be presented with the Bernie Ecclestone World Champions trophy. The team of students also visited MERCEDES AMG PETRONAS Formula One Team, one of their prizes for taking the Fastest Car Trophy supported by the F1 Team.

The team of six 15-18 year old boys from Alexander-von-Humboldt Gymnasium, Greifswald in Germany and Lexington High School, Massachusetts in the USA made F1 in Schools history when they were crowned F1 in Schools World Champions 2015, the first time that a Collaboration Team has achieved the ultimate accolade of this global education initiative.

George Britton, 18, Team Manager, twin brother, Max Britton, Resource Manager; and Yang Lu, 17, Design Engineer, from the USA united with Kasper Sunn Pedersen, 17, Sponsoring Manager; Christian Krüger, 16, Graphic designer and Devansh Dhard, 16, Aerodynamics Engineerfrom Germany to form the winning team. Five of the six team members reunited in London to receive the trophy from Bernie Ecclestone, who was highly impressed with the team’s achievements.
Team Manager, George Britton, said of meeting Bernie Ecclestone, “It was such an honour to meet such an iconic, powerful figure. I was very impressed with his knowledge of the F1 in Schools challenge and the support that he gives to it. He was very interested to hear about how Union Racing International worked together across two continents, as well as the work that we had put into the design of the car. I feel very privileged and proud to have this opportunity, which I wouldn’t have had without F1 in Schools.”

The next stop for Union Racing International was MERCEDES AMG PETRONAS Formula One Team headquarters in Brackley, Northamptonshire. The team were given in an exclusive behind-the-scenes tour of the impressive facility, covering 60,000 square metres and home to more than 700 employees, the site includes a wind tunnel, state of the art dynos, simulators, and the production resources to design, build and test the team’s Formula 1 cars.
Devansh from Union Racing International said of the visit, “What an experience! Having the chance to tour the Formula 1 World Champions factory was a dream come true for me. I didn’t know quite what to expect, but I was blown away by the place, with its high tech environment, huge array of sophisticated machinery, the work that goes into producing the cars, it was all just amazing.”
The team’s trip to the UK was rounded off with visits to City University London and UCL Mechanical Engineering, with each university giving the students an insight into university life, the courses available and the opportunities offered through the scholarships won by the team. F1 in Schools Founder and Chairman, Andrew Denford, accompanied the students and said, “We are extremely proud to have the support of the Formula 1 Group and the time that Bernie Ecclestone gives us. It is always a special moment for the team to be presented

with the Bernie Ecclestone World Champions trophy by the man himself and we are very grateful for his support. This visit, together with a really insightful tour of the MERCEDES AMG PETRONAS Formula One Team factory, is a highlight in the students lives and a memory that they will have for many years to come. I would like to thank the team for hosting Union Racing International. I know that they are all even more determined to carve out careers in F1 after their success in F1 in Schools and this trip to the UK.”
The F1 in Schools World Finals 2015 was held in Singapore last year and this year will be in Austin, Texas, alongside the FIA FORMULA 1 WORLD CHAMPIONSHIP UNITED STATES OF AMERICA GRAND PRIX. F1 in Schools challenges students to create their own Formula One team which is commissioned to design, construct and race the fastest miniature Formula One Car of the Future; a 21cm long scale model built from a modelling block and powered by a compressed air cylinder. Each team of between three and six students creates a ‘pit’ display and showcases their work in developing their race car. At the World Finals each team takes along a pit display, their cars and portfolio, as well as having prepared a verbal presentation for the judges. The cars race on a 20 metre track, with the cars covering the distance in around one second.
Redazione MotoriNoLimits