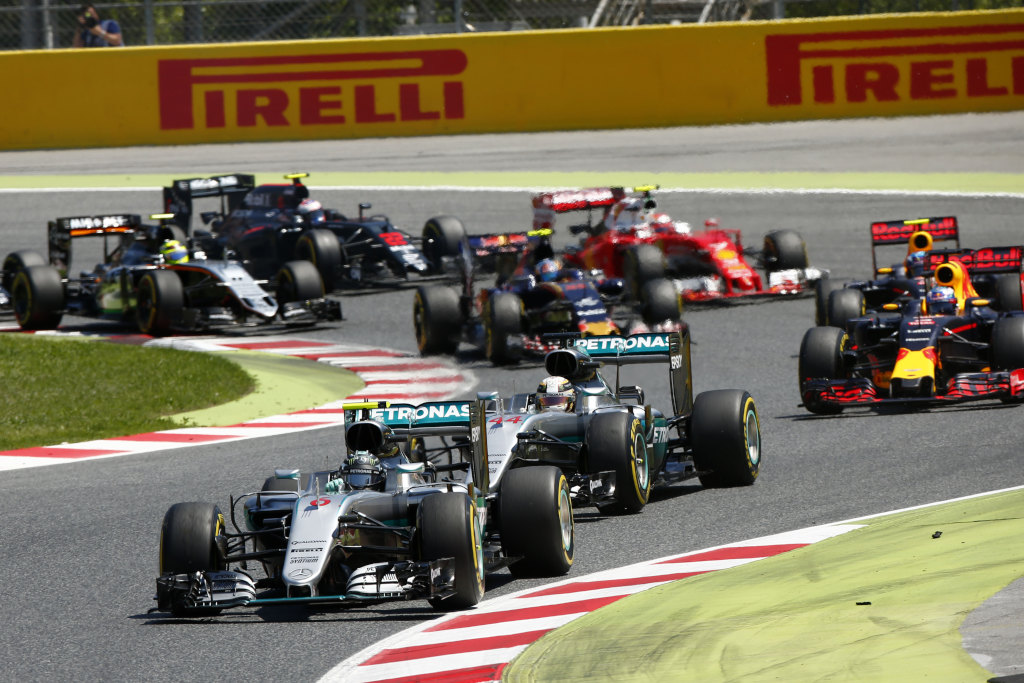 Devastating day for the Silver Arrows in Spain

Lewis Hamilton “I had a decent start from pole but got slipstreamed on the way to the first corner and lost the lead. Coming out of turn three, I was catching Nico really quickly and went for the gap on the right – I had part of my car alongside but then had to take to the grass. The gap was there and, if you’re a racing driver, you go for that gap. We saw what happened after that. I’m hurt and disappointed for the team most of all because we lost 43 points today. We’re all here working together towards the same result and the team give me the opportunity to race with the work they do. When I came to a stop in the gravel trap, all I could think about was how gutted I was for the team – that’s where I feel the pain. But we will move on together and come back stronger in Monaco”.

Nico Rosberg  “I had a great start and I was ecstatic after passing Lewis around the outside of turn one. At that point, it was my race to win. I came out of turn three and realised I was down on power with the wrong mode selected due to the engine mode switch being in the incorrect position. Lewis was closing in, so I decided to make a clear move to the right hand side as soon as possible, to close the door and show him that wasn’t an option. I was very surprised that Lewis went for the inside anyway. The next thing I knew, we were in the gravel trap. I’m gutted, not just for myself but for the whole team, it’s the worst feeling as a driver”.

Toto Wolff, Head of Mercedes-Benz Motorsport “After all the hard work we’ve put in over the past two weeks it’s deeply disappointing to come away with no points, but in my opinion this was a racing incident, with the drivers racing for position, and I don’t want to start blaming one or the other. Both Lewis and Nico are upset and we talked with them, looking at the pictures and the data, to determine exactly what happened. By letting the drivers race as we do, this kind of eventuality can happen but we won’t change our approach – we owe it to Formula One and the fans to let them race. But today, it was the work of the whole team that finished in the gravel trap, and this isn’t what we want to see happen – both of the boys know how much hard work goes into each race weekend and that they have the responsibility to bring that home. We have matured as a team over the past years, so we will be able to move on from this and, hopefully, fight back in a positive way in Monaco. I want to add a word for Max, too; on a bad day for us, he sprinkled a bit of magic on the sport, so big congratulations to him on what I’m sure is only the first of his Grand Prix wins”.

Paddy Lowe, Executive Director (Technical) “First of all, congratulations to Max Verstappen. It’s a tremendous story for Formula One. It was a very short race for us today and it was a huge disappointment for the team, especially to lose both cars in such dramatic fashion. It’s hard to take, especially given the amount of hard work prior to this weekend to solve a number of reliability risks and to bring the level of performance to the car that was witnessed in qualifying. It was a dominant front-row lockout and we were looking forward to a great race. We pride ourselves on allowing both our drivers to race, and race to the limit and that involves some tough manoeuvres from both Lewis and Nico and they sometimes won’t work out as we saw today. The stewards have ruled for no further action against either of our drivers. Most importantly we head to Monaco stronger and in better shape to continue in our quest for the 2016 Championships”.