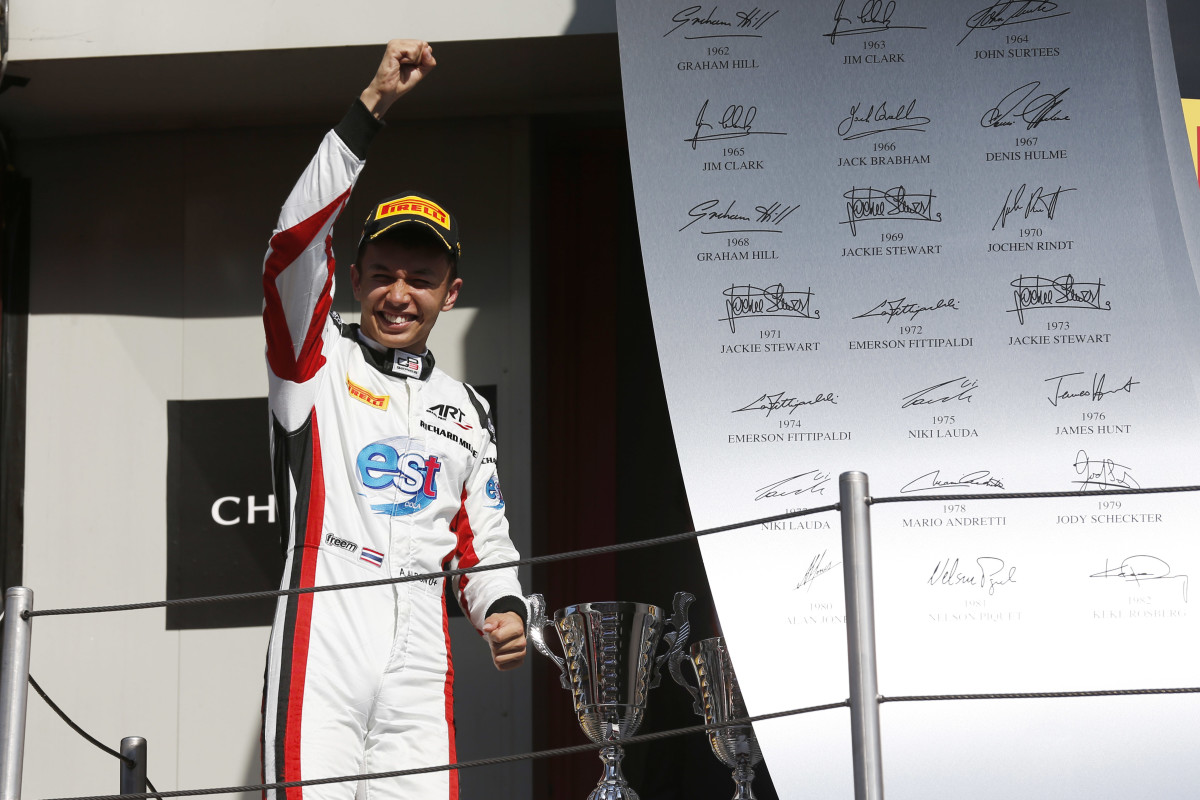 Alexander Albon made it two wins out of two for French squad ART Grand Prix in the opening round of the 2016 GP3 Series season. Thai racer Albon made

a perfect start and produced a stunning overtake on the outside of reverse pole-sitter Oscar Tunjo (Jenzer Motorsport) at Turn One to claim a maiden victory. Tunjo finished second ahead of Trident and Ferrari Driver Academy’s Antonio Fuoco.

Tunjo started from reverse pole at the Circuit de Catalunya alongside Arden International’s Jake Dennis but it was Albon from the second row who made a lightning getaway and made the move stick on the Colombian around the outside of the first corner. Fuoco also gained two places at the start, whilst Nyck De Vries jumped up four places to jump into the top five.
Yesterdays’ race winner Charles Leclerc dropped a few places at the start but fought back into ninth by the end of the opening lap. The Monegasque rookie was behind the DAMS duo of Kevin Jörg and Jake Hughes as they enjoyed a race long tussle for the final points on offer.

Albon’s margin at the front over Tunjo was around 1s and remained fairly consistent in the early stages, with Fuoco and Dennis five seconds adrift of the race leader. As the laps ticked down, the ART Grand Prix rookie started to increase his advantage by a tenth or two: The Thai’s strength being his pace in sector two and three, compared to Tunjo having the edge in sector one.

In the closing stages, Dennis was looking ready to attack Fuoco for the final spot on the podium; however the Italian was able to hold the Brit at bay until the chequered flag. The DAMS duo continued to be hunted down by Leclerc, with Hughes looking particularly racy on the final lap as he was eager to pass his teammate Jörg.
Albon remained calm and confident at the front and took the chequered flag 1.2s ahead of his nearest rival Tunjo to claim his maiden win in the category in his first race weekend. Fuoco celebrated his first podium of the season in third ahead of Dennis and de Vries. Koiranen GP’s Matevos Isaakyan finished sixth: The Russian drove a great race after qualifying P11. Jörg held off Hughes until the flag with Leclerc narrowly missing out on the final point.
Leclerc leaves Round 1 with the lead in the Drivers’ Standings – he holds a four point advantage over his teammate Albon and DAMS debutant Jake Hughes. Due to their double success; ART Grand Prix leads the Teams’ Standings over newcomers to the Series DAMS with Trident in third.
The second round of the season takes place at Spielberg in Austria on July 01-02-03, with the GP3 teams testing at the Red Bull Ring next month on June 07-08.
Redazione MotoriNoLimits
Barcelona– Race 2
*Time penalty for moving direction more than 3 times