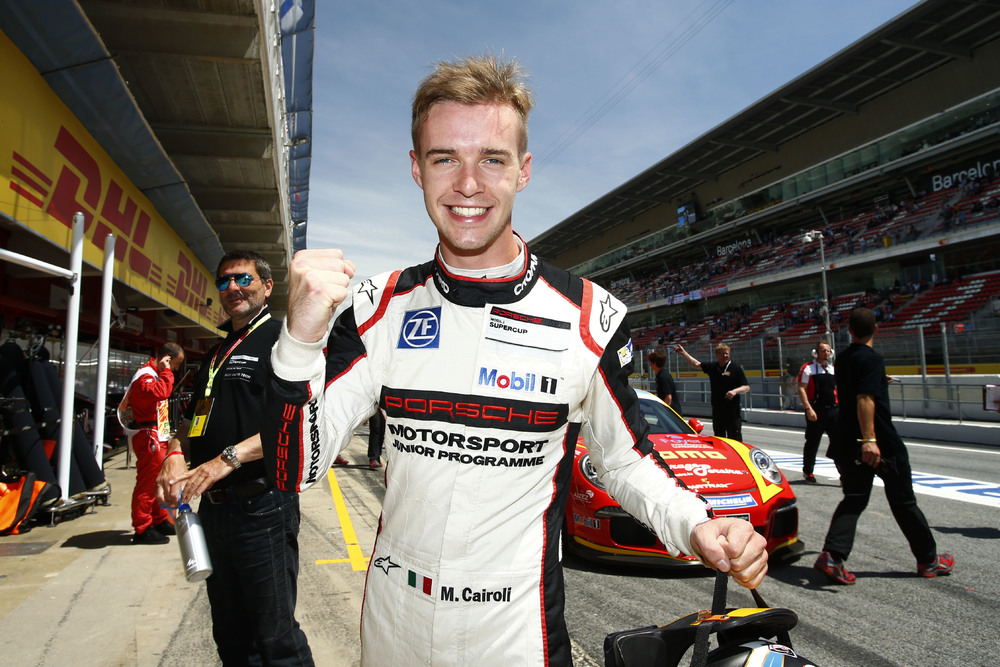 At the season-opener of the Porsche Mobil 1 Supercup in Barcelona, Porsche Junior Matteo Cairoli posted pole position in the Porsche 911 GT3 Cup

fielded by Fach Auto Tech on Saturday. Directly behind the 19-year-old Italian, the two Porsche Juniors Mathieu Jaminet (F/Martinet by Almeras) and Sven Müller (D/Lechner MSG Racing Team) clinched positions two and three on the grid. “My car felt perfect from the very first lap. I’m more than happy with pole position because obviously that’s the best starting position to win a race, and that is my goal,” said Cairoli beaming with delight.

In sunshine and temperatures of 20 degrees Celsius, the Porsche Mobil 1 Supercup headed out onto the track at midday to hunt for top times. With a lot of rubber left on the Circuit de Barcelona-Catalunya by the Formula 1 race cars, there was a barrage of top times at the

beginning of the qualifying session that were not surpassed over the next 25 minutes. Cairoli lapped the circuit in 1:50.187 minutes and outclassed his rivals. In his second year as a Porsche junior, he not only contests the full season of the Porsche Mobil 1 Supercup but also competes in various Porsche one-make cups around Europe.  Jaminet scored the second quickest time in 1:50.847 minutes. “This is, of course, a great start to the season. I hope this isn’t the last front-row grid position of the season for me,” declared Jaminet, for whom this year marks his first as a Porsche junior after winning an international selection process. The 21-year-old Frenchman comes from Woippy not far from Metz.

In the international driver line-up with pilots from twelve countries, Victor M. Jimenez-Garcia (E/MRS-GT Racing) will represent the colours of Spain. Jimenez comes from Madrid and has turned only very few laps on the Circuit de Barcelona-Catalunya. In qualifying he planted his Porsche on 16th: “Perhaps I’ll finish the race in the top ten. In such a strong field of drivers I’d regard that as a success.”