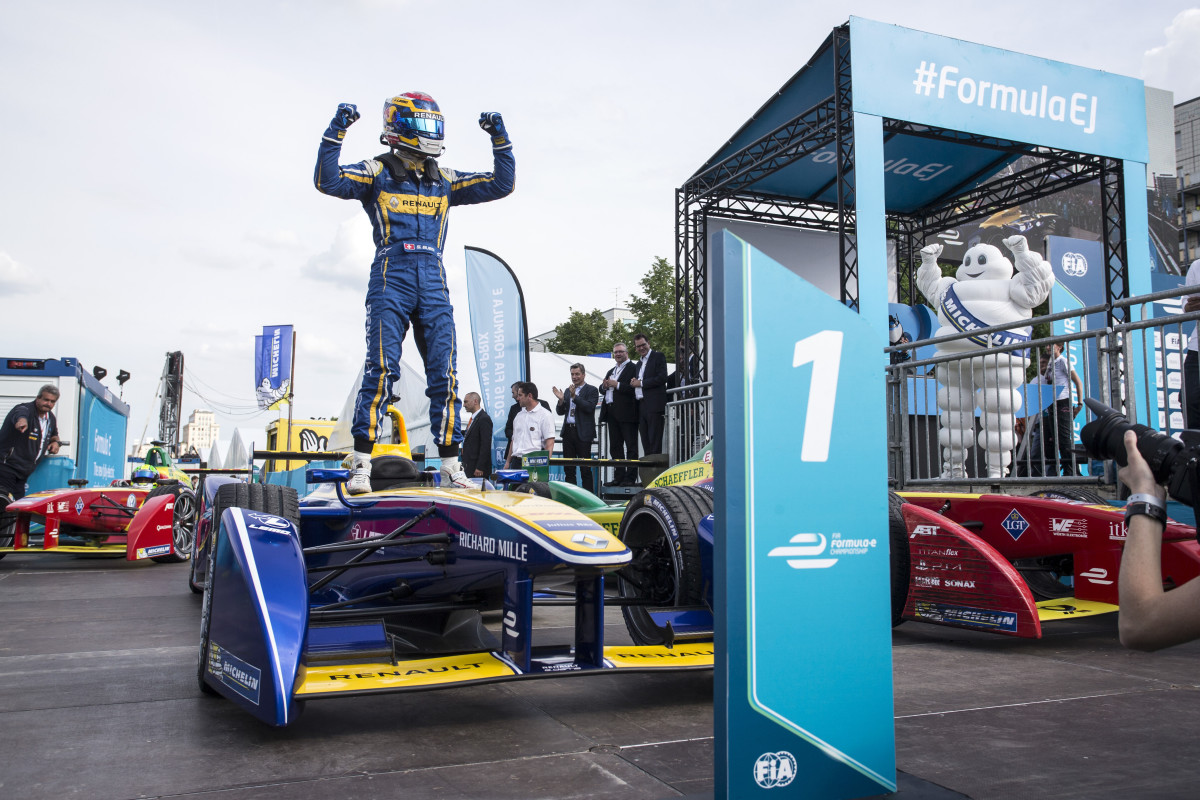 Sebastien Buemi has reduced Lucas di Grassi’s lead in the FIA Formula E Championship to just a single point following victory in the BMW i Berlin ePrix Buemi’s first win in Berlin since Punta del Este in December came after he battled his way past polesitter Jean-Eric Vergne (DS Virgin Racing) and built up a comfortable lead. This was reduced to nothing when the Qualcomm Safety Car was called out to retrieve the stricken Dragon Racing car of Loic Duval. This gave the chasing pack a chance to close in, but Buemi timed his restart perfectly and pulled away to claim his third win of the season.

“The first lap is always a bit tricky because you don’t know how much energy you will consume so basically he was using a lot of energy and I had to decide how much energy I was willing to use in the first laps,” he said. “I let him [Vergne] go but after four or five laps he had to save a lot more so I made my move. He closed the door so it was tricky but from then on I focused on building a gap. I was going for the fastest lap with the second car but it was not the quickest race as when you used a lot of energy you really had to save a lot. In the end I didn’t manage it so I’m a bit disappointed with that as it’s two points, but overall it was a good weekend.”

Daniel Abt scored his best result to date with an emotional second place, and received a terrific ovation from large percentage of the 15,000-strong crowd who made their way to the eVillage for the podium celebration.

“Today was simply amazing,” he said. “All day everything went perfectly. The atmosphere was great. The last few days were great. Starting the race, I knew I could do it but there were some really strong guys around me. I knew it would be tricky. I had a good start and it was pretty tight into the first corner. JEV was struggling a lot but he defended very aggressively so I had to make a committed move otherwise there was a chance to crash. Luckily I made it past and felt pretty confident but then some guys who were lapped just seemed to not know what the blue flags meant and I lost several seconds, especially in the second stint. Then it got interesting again because Prost got close. In the end, even with the safety car, all was good. I’m so happy and really thankful to the team for giving me a good car today.”

After starting back in eighth place, di Grassi had to fight his way forward, battling hard with Vergne and Nico Prost in particular. He extended his energy an extra lap more than his rivals to lead a lap during the pitstops, which meant he had extra energy to play with in the closing stages, but it wasn’t quite enough to get close to Abt to allow his team-mate to let him through.

“I’m very happy, I started eighth, it was a very tough race,” he said. “Everything against me, including Jean-Eric Vergne on the in-lap and the safety car, but we managed to pass Prost, who made it difficult to overtake but we managed to do another podium and stay in the lead by one point. It couldn’t be closer than that going into London. Now everything is open. London, and London weather, will decide how the championship goes.”

Prost held on to fourth to help Renault e.dams extend its lead in the teams’ championship. Vergne damaged his front wing on the chicane,

requiring it to be changed, which dropped him to fifth. After a poor qualifying, Andretti’s Robin Frijns drove a great race to fight his way into sixth place. Nick Heidfeld started at the back after his Mahindra Racing entry had its qualifying times removed for incorrect tyre pressures. Like Frijns he charged forward, collecting seventh place in the process.

Mike Conway recorded his best Formula E result to date for Venturi, while Simona de Silvestro was in the points again for Andretti in ninth. Despite being forced to start from the pitlane due to an electrical problem, Stephane Sarrazin maintained his record of scoring points at every race by taking 10th for Venturi.

Mahindra’s Bruno Senna, who lost his best-ever qualifying position of fourth for a similar tyre pressure infringement to Heidfeld’s, bagged the two bonus points for the Visa Fastest Lap. The sell-out race was deemed a huge success, especially given the incredible short period in which it was arranged. The championship concludes in London on July 2 and 3.