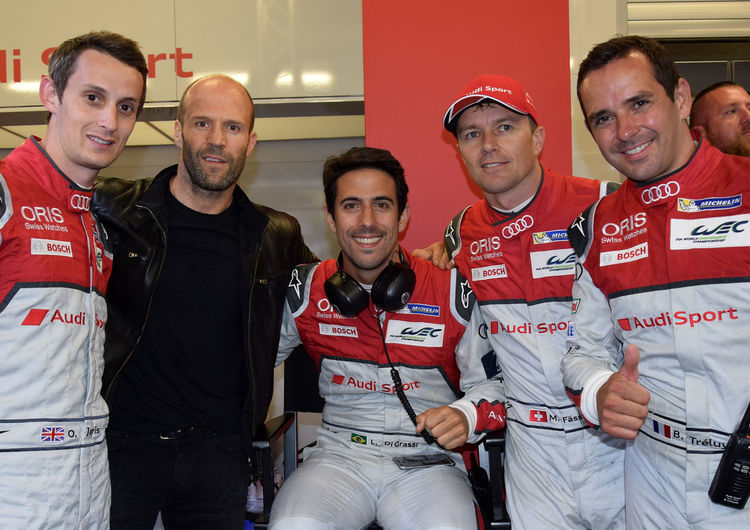 A touch of Hollywood at Le Mans: in the garage of Audi Sport Team Joest, action hero Jason Statham watched the start of the Le Mans 24 Hours for which Brad Pitt officially waved the flag. The night before, Keanu Reeves had received an exclusive tour of the Audi garage by Le Mans record winner Tom Kristensen. Other guests of Audi’s watching the 84th running of the iconic French endurance race included actors Mathieu Kassovitz and Riccardo Scamarcio, actress Valeria Solarino and singer Andreas Bourani.

Tom Kristensen expert at Eurosport
A new experience for Tom Kristensen: The record winner of the Le Mans 24 Hours for the first time served as an expert to the television channel Eurosport in the pit lane at the classic French endurance race. Beyond this commitment “Tom K.,” as usual, had an extremely busy schedule at Le Mans again.

Besides the Audi R18, the new Audi TT RS caused a stir at Le Mans. Journalists were given an opportunity to personally try out the 400-hp flagship of the TT model range on the Le Mans race track. There were two other premieres: for the first time, a group of journalists was allowed to practice a pit stop on an Audi R18 and at the Audi Arena, guests together with Audi Sport assembled a V12 TDI engine of the Audi R10 TDI that was victorious in 2006, 2007 and 2008.

Dindo Capello celebrates birthday at Le Mans
Dindo Capello celebrated his 52nd birthday at Le Mans on Friday. During the traditional visit to the Danish camp together with his former teammate Tom Kristensen, the Italian was appropriately celebrated. Capello worked as a spotter for Audi Sport at Le Mans. The other Audi Sport Ambassadors – Frank Biela, Emanuele Pirro and Marco Werner – were active for Audi in various ways at Le Mans as well.