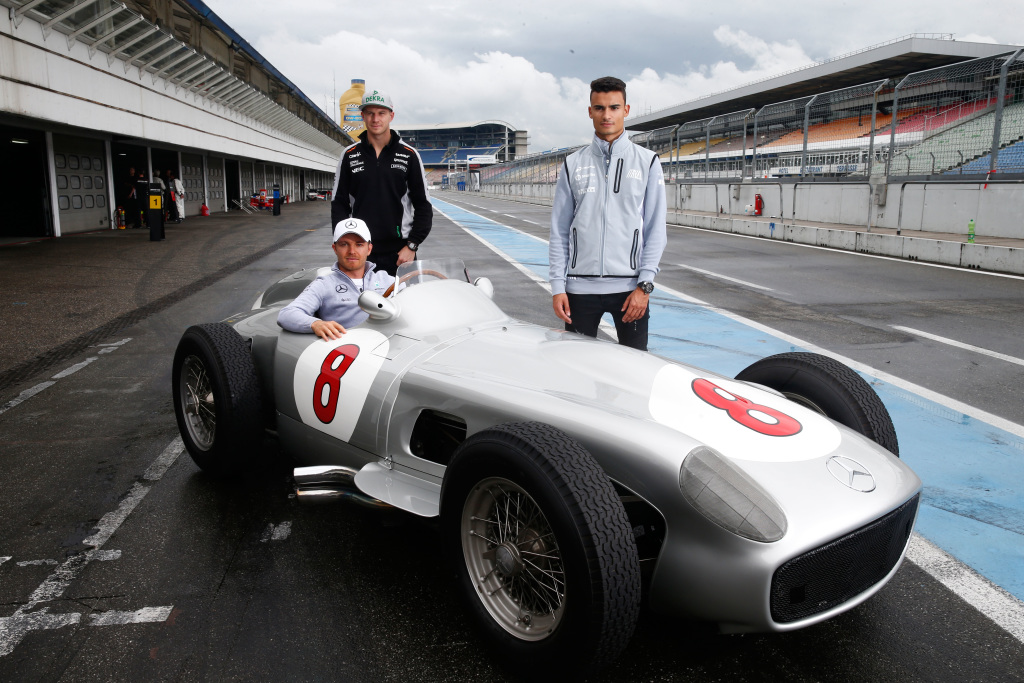 Hockenheim: winning the last home fixture, being crowned DTM champion and regarding it as a ‘home from home’ early on – these are just some of the memories that Nico Rosberg, Pascal Wehrlein and Nico Hülkenberg associate with the Hockenheimring. From 29th to 31st July, the 2016 German Grand Prix will present these three German Formula 1 stars with an opportunity to add further memories. One month ahead of the German Formula 1 fixture, championship leader Nico Rosberg (MERCEDES AMG PETRONAS), Nico Hülkenberg (Sahara Force India F1 Team)

and Pascal Wehrlein (Manor Racing MRT) paid an advance visit to the Hockenheimring. In the context of an official media day, they first addressed a formal press conference before proceeding to a barbecue at which they chatted with journalists about their home race in a more relaxed atmosphere.

But it wasn’t just the drivers providing Formula 1 interest at the Hockenheimring. On the occasion of the anniversary, several Formula 1 world championship-winning cars were attracting admiring glances in the paddock. For example, the legendary W 196 which won the title in 1954 and 1955, and its world championship-winning cousin, the F1 W05 Hybrid from the year 2014. Also on display were the McLaren Mercedes championship-winning cars of Mika Häkkinen (1998) and Lewis Hamilton (2008), all part of the special exhibition ’90 Jahre Großer Preis von Deutschland’ (90 Years of the German Grand Prix). The last one in line was, of course, the current generation of the Silver Arrow, the F1 W07 Hybrid.

The German Grand Prix celebrates its 90th anniversary this year. The first ever race was staged at the AVUS circuit in Berlin on 11th July 1926. The winner was Rudolf Caracciola in a Mercedes 2-litre 8-cylinder racing car with compressor. The most recent winner of the event, last held in 2014, is Germany’s own Nico Rosberg who won his home race in a Silver Arrow.

But the media day was not just about reminiscing – the smell of motor fuel was also in the air. Because after all, the Hockenheimring is a racetrack. The reporters were given first-hand experience of lapping at high speed as passengers in DTM, GT3 and AMG high-performance ‘race taxis’. In just a few weeks’ time (29th – 31st July), the Formula 1 stars will be competing in the 90th German Grand Prix at the Hockenheimring. That’s when F1 makes its long-awaited return: #F1isBACK

Nico Rosberg: “My memories of Hockenheim go back a long way. As I drove through the gates today, I was immediately reminded of so many things. For example, in 1995 when I sat on the roof of my father’s DTM car and waved to the crowd after his last race. The fans were going crazy in the grandstands. When I think of it now, I still get goose bumps. Two years ago, I won the German Grand Prix myself, driving a Silver Arrow. Hopefully, I can repeat that success this year. Formula 1 is mega exciting this season, in fact more so than for a long time. It will certainly be another big race here at Hockenheim. I am convinced that all the spectators will enjoy it.”

Nico Hülkenberg: “I know that I’m going to get the usual butterflies in the run up to my home race. Formula 1 is the ultimate in motorsport, and I’ve followed a lot of races here since the mid-90s. They were cool. But since 2005 and having competed in so many different races and racing series here, Hockenheim has virtually become my second home. When both the Mercedes grandstand and the Motodrom are packed with fans, you get a really spine-tingling atmosphere. This year, F1 is back in town. It is the premier class with the best drivers in the world. Imagine the Champions League final taking place on your doorstep – then you would obviously go to the match. You can also kill two birds with one stone – watching cool cars and soaking up the sun in the grandstands. What could be better than that?”

Pascal Wehrlein: “The first time I came to Hockenheim was in 2000, and that was as a fan. At the time, I was just five years old and was sitting in the grandstand overlooking the home straight. That was my first F1 memory, and 16 years later I’m competing in my first home Grand Prix here. Since then, I’ve always told myself that I would like to be driving down there one day. So I kept nagging my parents until they put me in the seat of a kart when I was eight years old. It took me three years to persuade them! Hockenheim in 2000 was the main reason for my persistence. It was a sensational experience for me. The speed of the cars thoroughly fascinated me. Everyone ought to experience this atmosphere once in their lives. They would definitely come back for more.”

Georg Seiler, Managing Director at Hockenheim-Ring GmbH: “We are naturally proud to be delivering the German Grand Prix again in 2016. The fans can expect a top-class starting field that includes four German drivers and also promises a thrilling battle at the front. We are very much looking forward to it. And even away from the track, the race weekend will be offering plenty of other activities for spectators, including trips in a ‘race taxi’, the Erlebniswelt centre next to the Mercedes grandstand and the exhibition on 90 Years of the German Grand Prix. So it’s going to be well worth your while to come and watch the race live at Hockenheim and to see how the 90-year history of the German Grand Prix continues.”

Special incentive for Formula 1 fans: Formula 1 fans can benefit from a very special ticket promotion to mark the 90th anniversary of the German Grand Prix and receive up to 90 euros anniversary discount on each adult ticket for the Mercedes grandstand. Of course, young fans can also take advantage of ticket price reductions. And it couldn’t be simpler: to order, simply enter promotion code Mbsilberpfeil2016-4R6P1W at www.mb4.me/F1istZURUECK and click enter. The discount is valid while places still remain available and applies only to seats in the Mercedes grandstand.