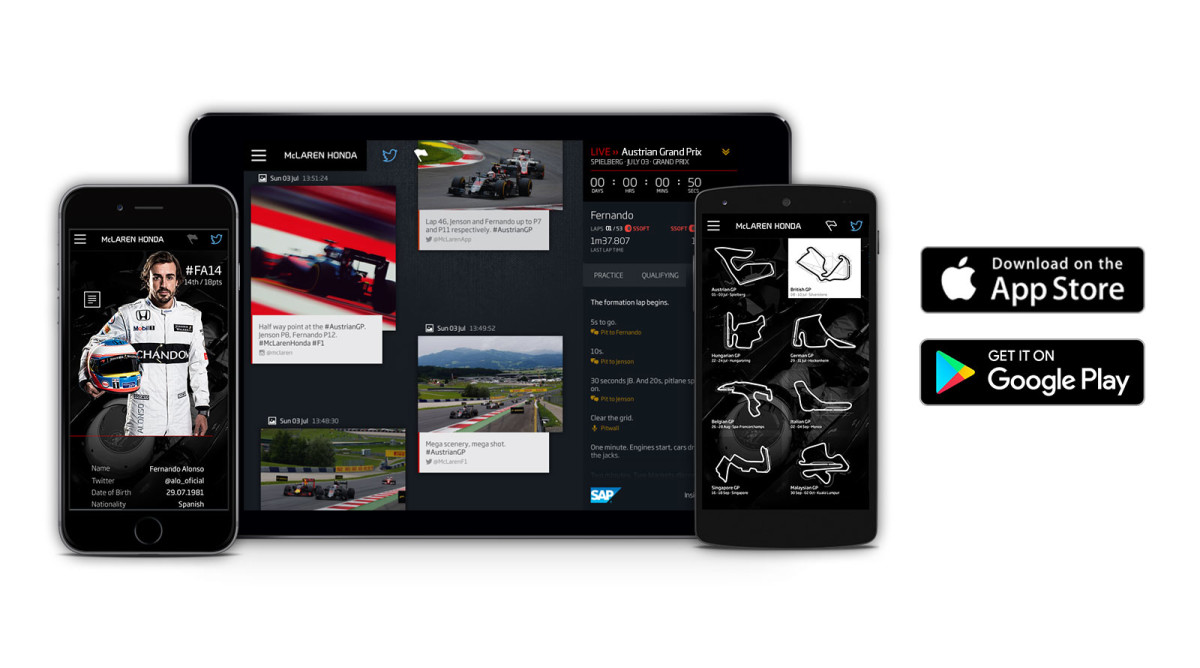 McLaren-Honda is pleased to announce the release of the McLaren App onto Android devices, extending the reach of its mobile offering into a broader global community.  The interactive app provides the most elegant and seamless access to the world of McLaren on handheld devices, and is now available for free download from the Google Play Store as well as the App Store.  The McLaren App pulls together all of McLaren’s social media stories, McLaren.com content and an all-new range of app-exclusive features and competitions specifically designed for the platform.  Users can gain exclusive access to the world of McLaren and its partners, from behind-the-scenes at the McLaren Technology Centre, to team features and trackside commentary direct from the McLaren-Honda garage across grand prix weekends.

Speaking of the launch onto Android, McLaren Group Head of Digital & Social Media, Rob Bloom said:  “Releasing the McLaren App across the two leading operating systems (iOS and Android) represents a significant step in the continued expansion of McLaren’s digital and social media fan engagement programme. The launch onto Android follows the initial iOS roll out, from which we have harnessed the data and insights on the user base and preferred-content types to create these new versions across platforms. The breadth of content generated across all McLaren Technology Group channels represents the sheer diversity of the organisation, and through the McLaren App, our fans can access an instant, always-interesting feed into the world of McLaren.”

At the heart of the McLaren App remains the Transmission Centre, a central hub that constantly updates a stream of chat, photography, video and comment from a variety of social media sources.  During race sessions, the Transmission Centre’s LIVE panel expands to accommodate constantly updated insights and commentary from the track, including transcribed radio conversations and real-time data, making the McLaren App the ultimate hub of small-screen access and team insights.  Also available on the app are driver biographies and galleries, data and videos about the MP4-31, and information about every circuit on the Formula 1 calendar. Download the McLaren App here: http://mclrn.co/iOS http://mclrn.co/Android