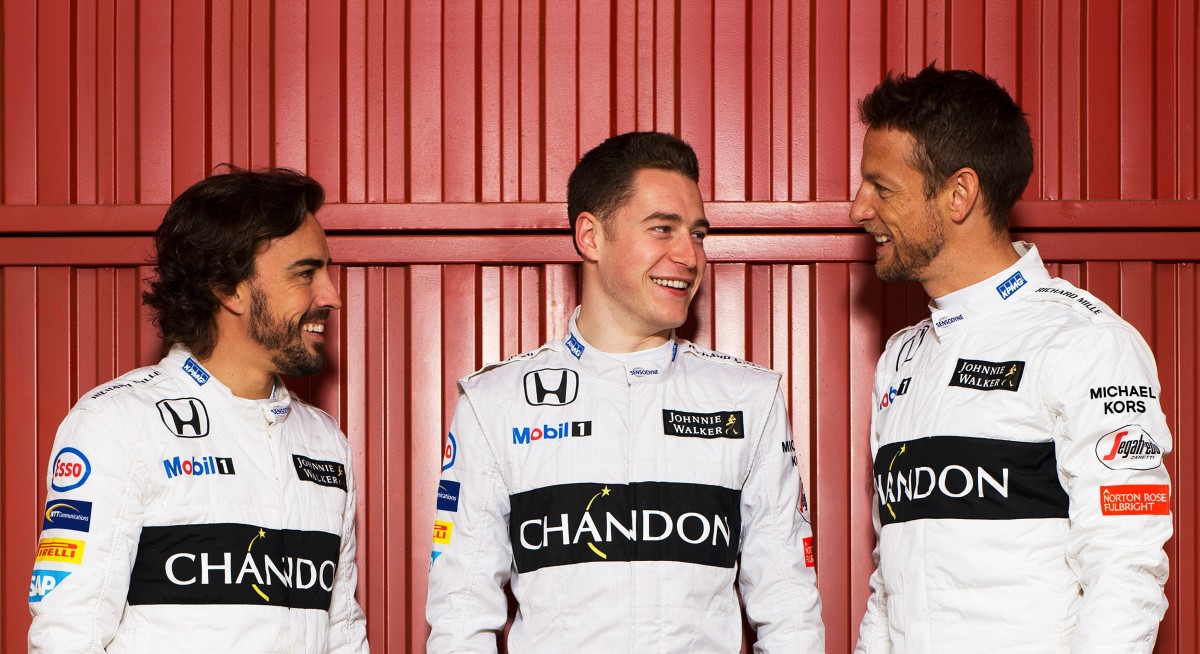 Ron Dennis (Executive Chairman and Chief Executive Officer, McLaren Technology Group): “McLaren-Honda’s race driver line-up next season will be Fernando and Stoffel – a perfectly balanced mix of proven brilliance and immense potential. But, before I speak on the subject of either of them, I want to talk about Jenson. As a race driver for our team these past seven seasons, he’s been superb, both on and off the track. And, as we’re seeing this season, he remains superb – not only fast and fit but also experienced and expert. He’ll start his 298th Grand Prix tomorrow; as such, he’s the most experienced driver on the grid. Having extended his contract to include 2017 and 2018, he’ll continue to be a senior, influential and committed member of the team, and will remain centrally involved in the development of our cars. He’ll also be available to race for us if circumstances require it. On behalf of all at McLaren-Honda, I want to say how thrilled we are that Jenson has extended his contractual relationship with us. Moreover, I’m absolutely certain that the depth of his experience and the currency of his expertise will give us an advantage over our opposition next season.

“As for Fernando, 2017 will be his third year as a McLaren-Honda race driver, and I need hardly reaffirm his credentials here. So let me simply restate my belief that he’s one of the finest and fastest Grand Prix drivers I’ve ever seen, and we’re very proud to have him in the team. He’s been both diligent and patient over the past two seasons, and he shares with all of us at McLaren-Honda the confidence that 2017 will be the season in which our partnership begins to deliver strong results. Stoffel has been a member of the McLaren Young Driver Programme since February 2013, and was appointed our Test and Development Driver 11 months later. Over the past two-and-a-half years he’s made a very valuable contribution in that role, learning from his two World Champion team-mates as well as from our many world-class engineers, and, having been runner-up in World Series by Renault in 2013 and the run-away winner of the GP2 Championship last year, he’s now completed with distinction a meticulously designed apprenticeship. He’s consequently now ready to race in Formula 1, as his fine Grand Prix debut in Bahrain this year proved.”

Jenson Button (Driver, McLaren-Honda): “I’m delighted that I’ll be staying on as a key member of the McLaren-Honda team. In fact I’m massively excited about my new role, which has come about as a result of a number of in-depth chats with Ron. Specifically, I’m looking forward to becoming even more deeply involved in the team’s efforts to bring about the success we’ve all been striving to deliver. I love McLaren-Honda – I firmly believe it’s made up of the best bunch of people I’ve ever worked with – and I have no intention of ever driving for another Formula 1 team. To be clear, I’m very definitely not retiring. I’m contracted for both 2017 and 2018, I intend to work hard on car-development, and I’m sure I’ll get behind the wheel of the new car at some point.”

Fernando Alonso (Driver, McLaren-Honda): “Although the 2016 season is far from over – and I’m confident we can score some good results before the end of the year – I’m already looking forward to 2017. “I’m passionately committed to contributing to making McLaren-Honda a winning team, and next year I firmly believe we’ll begin to see the kind of results we’ve all been working so hard to achieve over the past couple of years.  Jenson has been a brilliant team-mate during that time, and it’s fantastic news that he’s going to continue working alongside us in his new role. He’s a very good driver and a very nice guy, and his car-development skills are second to none. As for Stoffel, I’ve come across a lot of young drivers over the years, and I know a good one when I see one. I enjoyed working with him when he stood in for me in Bahrain earlier this year, and I’m looking forward to continuing to work with him, and to helping him learn and develop. Together with Jenson, I’m sure he and I can take McLaren-Honda back to its rightful place: at the front of the grid.”

Stoffel Vandoorne (Driver, McLaren-Honda): “First of all, I want to express my gratitude to everyone at McLaren-Honda, and especially Ron, for showing faith in me. I’ve signed loads of autographs in my career, but, when I inked my signature on my McLaren-Honda contract today, it’s safe to say I had an exceptionally special feeling as I picked up my pen to do so. It’s an enormous honour to become a McLaren-Honda race driver, and I promise to work as hard as any Formula 1 driver ever has before. I already know the team extremely well – they’re a fantastic group of extremely clever people – and I’ve already raced the car once and tested it often. I have total confidence in the potential of the McLaren-Honda project, and I firmly believe that, racing alongside a brilliant and experienced driver, I’ll be able to make a strong contribution to the team’s future World Championship successes. I’m not saying when that’ll happen, but I’m confident that that’s what the McLaren-Honda team will achieve, and I’m determined to do my bit. There are a lot of other people whom I’d like to take this opportunity to thank – too many to list in fact. So all I can say is: you know who you are, and thank you.”