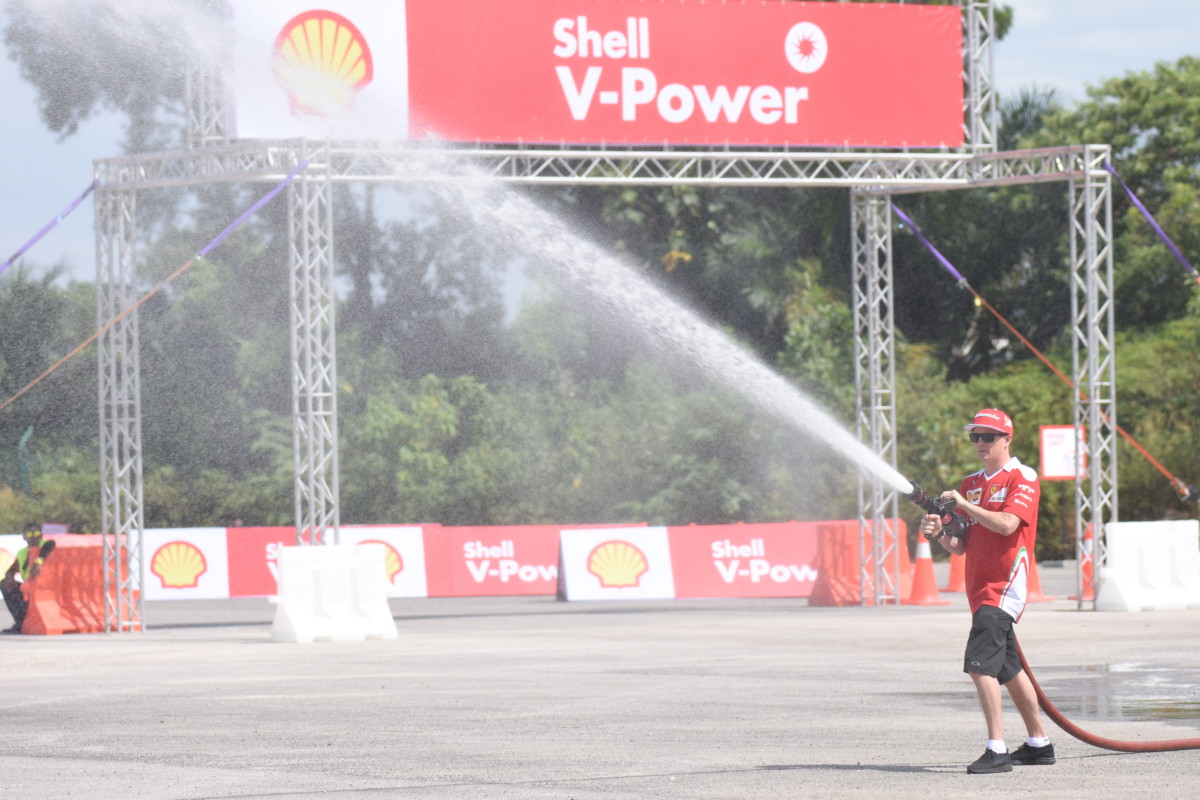 with Malaysia’s Fire and Rescue Department – in a unique Shell V-Power Job Swap ahead of the Malaysian Grand Prix. Through the Job Swap, Kimi – also known as the ‘The Ice Man’, had the unique opportunity to become a fireman for a day. Warming up for the race in Sepang, the Formula One Ace took the wheel of an 18 tonne fire truck at a specially constructed track in Senawang, Malaysia. Sharing a common goal of staying safe for protection, be it their vehicles, reputation, as well as lives, Räikkönen and Uzair exchanged tips prior to their Job Swap.

The Formula One driver, who normally races at speeds of up to 300km/h, faced a test slightly off his usual track. His Job Swap included manoeuvring the 8.5m fire truck around a custom built obstacle course, a target practice with the fire hose, and finishing with placing the fire ladder. Kimi was able to learn about the preparation and skills required by firemen to help them save lives.

“The fire truck is such a different vehicle to my Ferrari car, and it was a new experience to drive it. I take my hat off to firefighting experts like Uzair whose job is to protect us all. Whilst I never thought our jobs had any similarities, today I have learnt that protection and performance are important in both of our worlds,” said Kimi on the Job Swap challenge.

With protection at the core of his job, Uzair who has rescued over 100 people and extinguished more than 450 fires, had the opportunity to feel the adrenaline rush of an Formula One racer. While hitting the accelerator of a Ferrari California T, the fireman also learnt the importance of protection in a fast moving vehicle. Kimi took Uzair on a range of test laps and precision driving exercises, before handing over the wheel to Uzair, so that he could have a taste of high performance driving. Sharing his take on the Job Swap, Uzair mentioned, “I have learnt how protection can make a big difference to performance. Beyond that, getting the opportunity to work with Kimi to understand how he safeguards himself, helped me realise how similar we are in our jobs. Although we face different challenges, ultimately we both strive to protect ourselves so we can perform better at our jobs.”

“Initially, we were unsure what to expect from this activity. In the end, both drivers discovered the importance of preparation, and the vital role played by protection in the performance of both roles. Shell is committed to motorsports as an integral part of our R&D programme. Our innovations developed for the track help us make better fuels for our customers, enabling them to perform on the road with engines protected by Shell V-Power,” said Shairan Huzani Husain, General Manager Shell Retail Malaysia/Brunei.
Kimi and veteran firefighter Uzair were brought together in this unique Job Swap by Shell, whose Innovation Partnership with Scuderia Ferrari for over 60 years allows the company to test Shell V-Power Gasoline fuels under extreme conditions. Inspired by technology innovations for Scuderia Ferrari, the Shell V-Power fuel formulation is designed to actively clean and protect vital engine parts, to help deliver more power throughout the life of a vehicle.
Redazione MotoriNoLimits