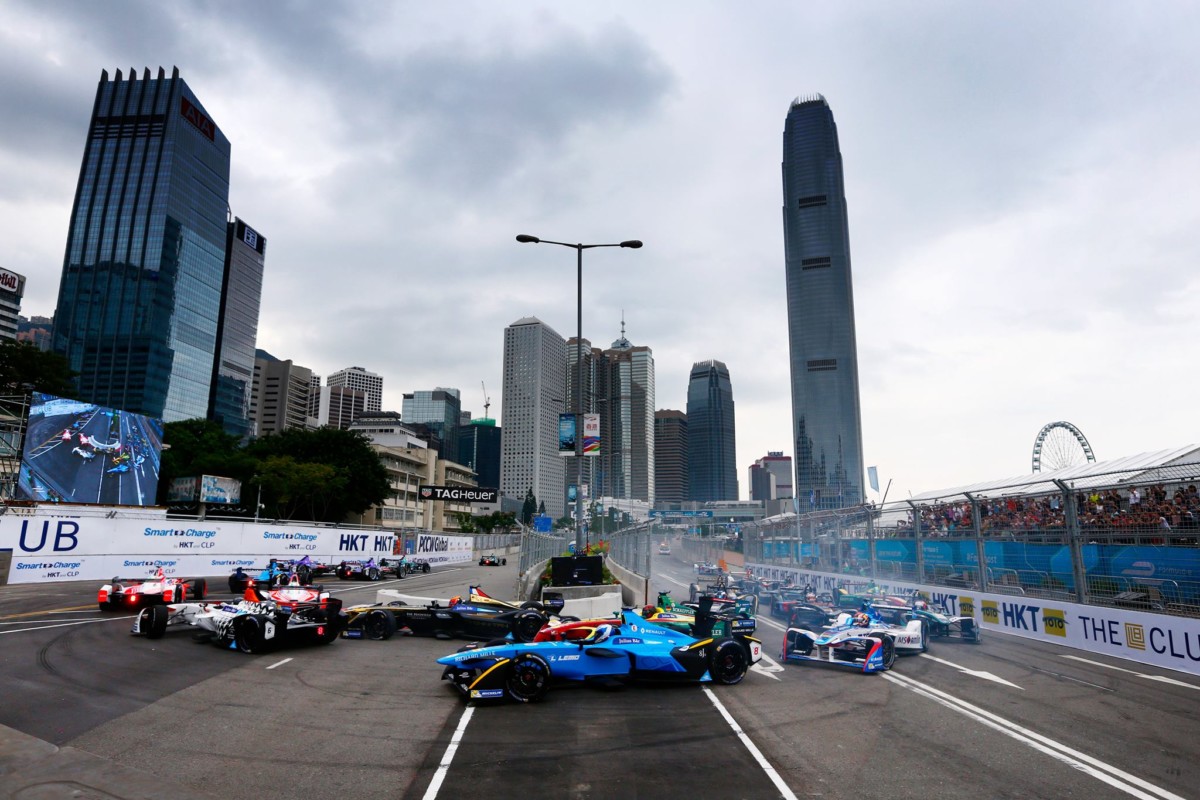 Reigning FIA Formula E champion Sebastien Buemi got his title defence off to the perfect start with victory in the 2016 HKT Hong Kong ePrix. With 30,000 people attending the event, the new Formula E season began with one of the most unpredictable races so far. Buemi hit the front in the second half of the race when Sam Bird pitted for his mandatory car swap. But the DS Virgin Racing car failed to pull out of the

pits, allowing Buemi, who had made his stop under the Qualcomm Safety Car, to take over out front for his seventh Formula E win. “We had identified a window when we knew we could pit,” said Buemi. “I was surprised that Sam did not come in. But I’m happy with how it went – it was very tough. In the first car I didn’t have the pace to go much quicker, but in the second car was much more competitive.”

From the start it was Julius Baer pole position man Nelson Piquet Jr. who led into the tight first corner, and the Brazilian held a comfortable lead over his team-mate Oliver Turvey in the early stages. Turvey had his hands full defending from Bird and Buemi, while behind them bumping and barging resulted in numerous contact; local hero Ma Qing Hua retiring and both ABT Schaeffler Audi Sport cars of Daniel Abt and Lucas di Grassi being shown the black and orange flag, ordering them to pit for mechanical repairs.

During this period there was also some contact between Bird and his DS Virgin racing team-mate Jose Maria Lopez and the damage to ‘Pechito’s’ car had made it a real handful. Finally, he lost the fight and crashed into the barriers at the chicane. The next car along was race-leader Piquet, and unsighted, he had to slam on the brakes to avoid hitting the Argentine. As his brakes locked he sailed down the escape road before gently nerfing the barrier. His car was undamaged, but he had dropped to third by the time he re-joined.

Bird led from Buemi, but with the Qualcomm Safety Car deployed so that Lopez’s car could be extracted, the Renault e.dams team opted to pit their man. This proved to be the decisive moment of the race. DS Virgin kept Bird out, while NEXTEV NIO chose to stop Piquet just as the race was going back to green. These two errors – compounded by a technical problem that delayed Bird in the pits – sealed the win for Buemi. He still had to put a move on di Grassi, who following some amazing pitwork by the team in replacing his damaged nose – and a very aggressive energy strategy – finished second from 19th on the grid. “It just shows that the ABT Schaeffler Audi Sport team never give up. We had a pretty good start and first lap, but then I think Ma crashed into someone and then I crashed into the crash. The nose was broken and I had to come in and I thought the race was finished. But the mechanics did a fantastic job to keep me on the lead lap. I thought I was just going for fastest lap but the team said ‘no, no, no… we keep pushing’ and then the safety car came out…”

A stunning first lap, which took him from 10th to sixth, played a major part in Nick Heidfeld taking third place for Mahindra Racing. Like his fellow podium finishers, he had to work hard to make his energy last. He did it perfectly, crossing the line as he hit zero per cent. “I made up one position on the launch and then I braked very late into the first corner and passed a couple more cars and just hoped that nobody would squeeze me on the exit and I managed to make it stick. It was quite tough at the end because I had Nico behind me and when I came across the line the man was holding the ‘last lap’ board and not the chequered flag and I thought ‘oh no’ but luckily it worked.”

Nico Prost ensured that Renault e.dams left the first race at the head of the team’s points standings with a solid drive to fourth ahead of both Andretti drivers. Antonio Felix da Costa drove well to rise from 14th to fifth, while his team-mate Robin Frijns was one of the stars of the race. After crashing heavily in qualifying his car had to be completely re-built and he started dead last. But he drove a strong race, pulling off a couple of great overtakes to come home a satisfying sixth.

Jerome D’Ambrosio rose from 18th to take seventh for Faraday Future Dragon Racing, while Turvey finally came home in eighth. Maro Engel was the highest-placed of the five rookie drivers in ninth, finishing ahead of his Venturi team-mate Stephane Sarrazin, who claimed the final point in 10th. The bonus point for the Visa Fastest Lap went to another rookie – Mahindra Racing’s Felix Rosenqvist. The championship now moves to North Africa for the first time, with the Marrakesh ePrix on November 12.