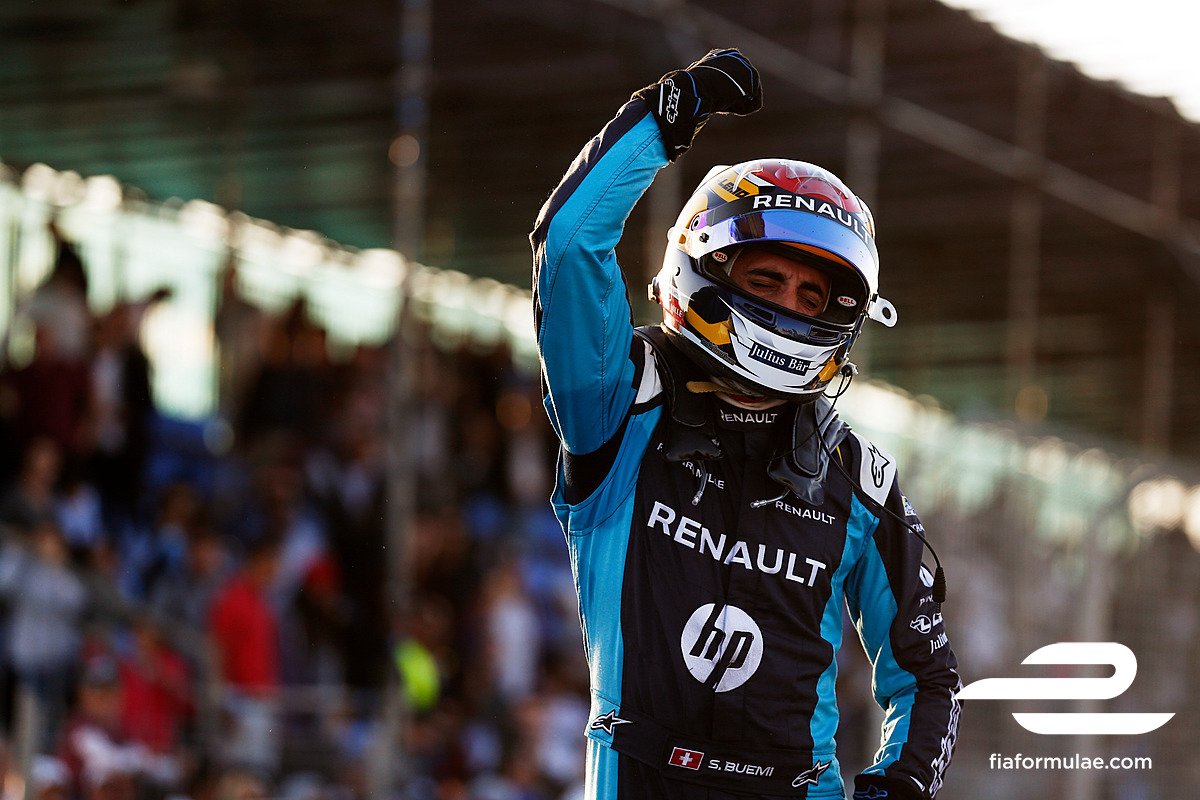 Reigning Formula E champion Sebastien Buemi’s perfect start to his title defence continued in Marrakesh, with victory in the series’ first visit to Africa. A five-place post-qualifying penalty for an underweight fire extinguisher dropped him to seventh on the grid and meant his eighth win in the electric street racin

g series was far from straightforward. In front of a passionate 7000-strong crowd – and with Grammy-nominee Akon among them – it was the Julius Baer Pole Position winner Felix Rosenqvist, who nailed the start and sprinted off into the lead. The Mahindra Racing driver was in inspired form and soon opened up a comfortable lead. The Swede had to pit for his mandatory mid-race car swap a lap earlier than Buemi, and it was the extra energy that the Swiss managed to save that allowed him to win the race. Rosenqvist had led for 27 of the 33 laps, but after the pitstop Buemi was gaining lap-by-lap, and when the move for the lead finally came there was a sense of inevitability about it. Still after having to charge his way through the pack in the early stages – and making a mistake just before the pitstop that could have ended his race – Buemi was delighted to increase his record tally of wins.

“I had a bad first lap because I consumed a lot of energy and you don’t want that, but then I started to overtake people but obviously Felix and the other guys had a very big advantage,” he said. “After a few laps I realised I was going to go longer, so I knew that I would have the edge in the second stint, and then it was looking very good towards the end of the first stint – but I had a big mistake in Turn 11, the one just before the pit entry, I braked too late and I lost the regen and nearly went off. When you take the lead it is always great, but you know all the overtakes were good, maybe the one with Sam and Felix were the best because they were putting me in a good position.”

Having to save energy in the closing stages, Rosenqvist was unable to keep Sam Bird behind, and the Brit duly collected second place and a decent haul of 18 points. The DS Virgin Racing driver had a sizeable crash in the second practice session, and the team did a fantastic job to have the car ready for the race. “I need to buy the boys a couple of beers

tonight, because they worked really, really hard,” he said. “It was a big shunt actually, a lot of damage – but yeah the race was ok. We still have a lot of work to do, we struggle in some areas, the circuit is quite different to the ones we normally go to. So our car didn’t behave as brilliantly as the two guys sitting next to me, we struggled a bit more for the balance today, but even so, to come home with 18 points today is pretty strong.”

Rosenqvist did manage to hold on for third place and his first Formula E podium in only his second race. It was an impressive performance and following Nick Heidfeld’s third place in Hong Kong, it means that Mahindra is currently joint second in the teams’ championship with ABT Schaeffler Audi Sport. “It started off pretty well,” he said. “For me, it felt like I was maximising what I could do with speed in the corner where we could actually find lap time, and when I heard that Seb and Sam were behind me, I knew they were on another level and there was no way I was able to compete with that as I was already very tight on energy. I think we did what we could today with the preparations we had and it’s really good for us to have two podiums already. I think qualifying has been strong for us but definitely there are some steps to take in the race, but looking at Hong Kong, this is already really good.”

Double teams’ champions Renault e.DAMS heads the standings and its tally was helped by a solid fourth place from Nico Prost. Fifth place went to Lucas di Grassi after yet another charging drive. After starting 12th following a disappointing qualifying session, he pulled off a series of aggressive overtakes to work his way up the order. His ABT Schaeffler Audi Sport team-mate Daniel Abt followed him home in sixth place for his first points of the season. Oliver Turvey reckoned that seventh place was the best that the NEXTEV NIO team could have managed, while Jean-Eric Vergne was clearly unhappy with finishing eighth in a race he looked to have a chance of winning. The TECHEETAH driver was running ahead of Buemi and was closing in on Rosenqvist, when he was given a drive-through penalty for speeding in the pitlane. This was the result of a broken pitlane speed limiter button, the same issue which had prevented him from taking part in Super Pole earlier in the day. He was still running fifth after taking his punishment, but then in the closing stages he suffered complete failure of the electrics on his steering wheel and dropped to eighth. Heidfeld bagged a couple of points for Mahindra in ninth, while DS Virgin Racing’s Jose Maria Lopez scored his

first-ever Formula E point with 10th. The bonus point for the Visa Fastest Lap went to Loic Duval, which was some compensation for a difficult weekend blighted by technical issues in his Faraday Future Dragon Racing entry.

The series now takes a mid-season break, before returning with the Buenos Aires ePrix on February 18. However, all the Formula E drivers will be in action before then at CES in the Vegas eRace on January 7, where they will take part in a virtual race around a bespoke Las Vegas street track. There’s a million-dollar prize fund, but they’ll have to beat the 10 sim racing experts who will qualify from the Road to Vegas Challenge to get their hands on the big prizes.