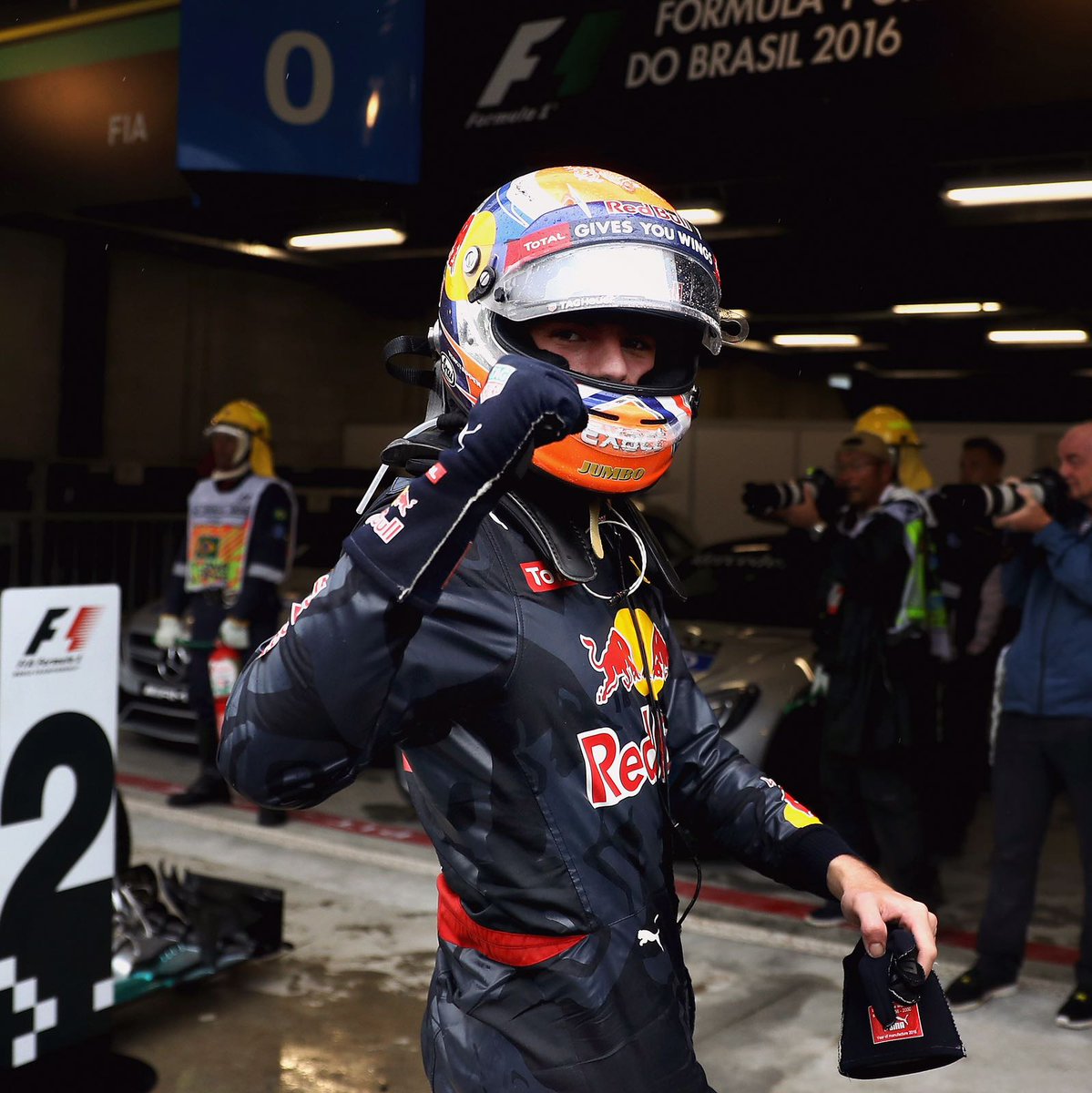 MAX VERSTAPPEN, Finish Position: 3rd, Start Position: 4th: “I think the word for today is ‘Exciting’. I overtook Nico around the outside of turn 3 which was really fun to do, I just seemed to find a bit more grip out there. I then started chasing Lewis which resulted in me having a massive moment in the final sector, I was really lucky to keep it out of the guard rail. After that scare my pace was still good and I held onto P2. The rears then started to lose grip and I was told Daniel had pitted for Intermediates and was going fast so I followed that plan. For a lap or so it was really good but then more rain came which resulted in no grip in the last sector. There was no way we could carry on so had to pit again for wets. From there on the race was really good fun, plenty of overtakes around the outside because if you stay behind them

there’s too much spray, I had to find another line. I just kept my head down and managed to get past quite a few cars in the remaining laps. I could hear the crowd going crazy when my engineer was on the radio, so I’m very thankful for the Brazilian fans for getting behind me.  At the end when I crossed the line it felt like a victory, it was almost as beautiful as my race in Barcelona.”

DANIEL RICCIARDO, Finish Position: 8th, Start Position: 6th  : “It was a frustrating race, we never really felt like we got lucky with the strategy; every time we made a change with the tyres there was a safety car or a red flag. We lost positions and obviously we could not predict what was going to happen and we felt a little bit on the back foot. But the real difficulty today was my visibility, which was a struggle as my visor kept fogging up. I kept opening my visor and trying to wipe it but it’s never happened before, and it held me back. It’s a shame as the car was a lot better than eighth, when we had a clear track our speed was good. It was tricky out there, for example with Kimi, I didn’t see him crash in front of me. It wasn’t until I got back to the pits and saw a replay I knew he’d crashed. From that point of view they obviously make some good calls with red flags. I’m glad we got to race and glad we could finish it, and that despite some crashes everyone was safe. The fans put up with a long afternoon so thanks to them for staying with it.”

CHRISTIAN HORNER, Team Principal: “An extraordinary motor racing day in testing conditions for the drivers and of course the officials. Having got ourselves into a good position at the start of the race, at the restart Max made an unbelievable pass on Rosberg round the outside of turn 3 which set up his afternoon of audacious driving and passing moves. It was a race that continuously teetered on the Intermediate being the better tyre and after the delay due to the conditions it did look like the better tyre. When Daniel fitted the tyre he started setting purple sectors and we therefore took the gamble to put Max on to the Inter. The rain then marginally increased and we had to make a difficult decision to pit both of our cars, dropping them down the order but giving them fresh extreme tyres. Thereafter, the last 15 laps

were something special to witness as Max made his way back through the field to achieve a quite remarkable podium. With Daniel finishing in eighth place that secures our second place in the Constructors’ Championship which is a quite a feat. We’d like to dedicate this race to the memory of a very valued member of our team, Mark Simpson, who we unfortunately lost after a difficult illness earlier in the week. ‘Simo’ as he was known to us, was an important part of our team and I’m sure he would have enjoyed what we saw from Red Bull Racing today.”
Redazione MotoriNoLimits