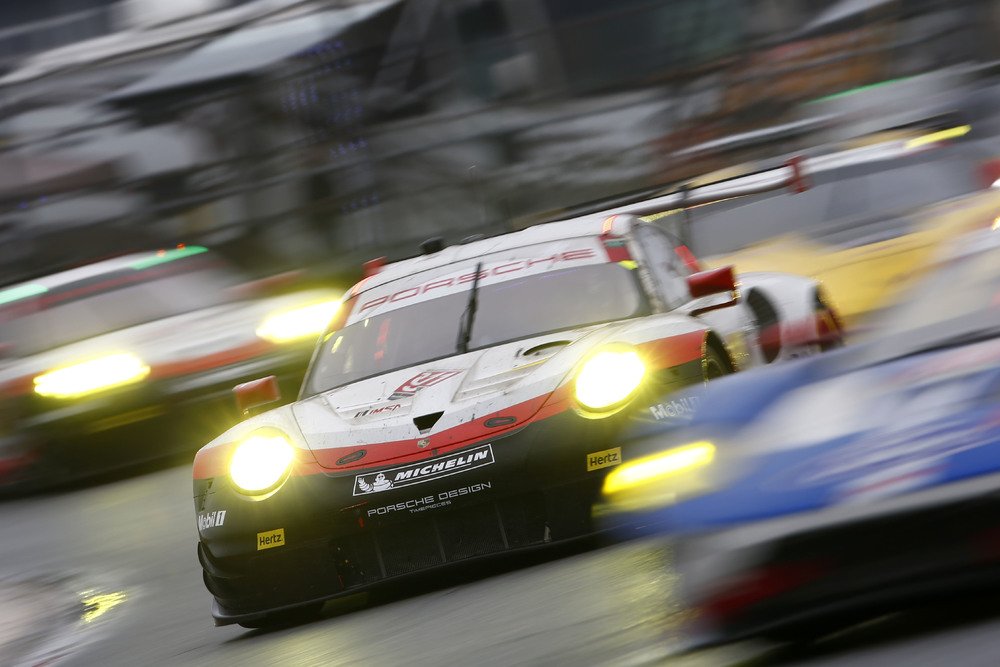 Cadillac claimed victory in the Daytona 24 Hours as two of its new prototypes collided in the closing stages of the IMSA SportsCar Championship opener.

The Wayne Taylor Racing Cadillac DPi-V.R shared by brothers Ricky and Jordan Taylor, Max Angelelli and Jeff Gordon took the victory by just over half a second from the best of the Action Express Racing Cadillacs. The race turned into a 20-minute dash to the flag after the 21st and final safety car of an event that ran in wet conditions for nearly half of its duration. The WTR Cadillac with Ricky Taylor at the wheel was a second behind Albuquerque after the race went green for the final time. Taylor closed down the gap and then made an opportunist move into Turn 1 with four laps to go. The WTR had got his nose alongside the rear wheels of the leader when Albuquerque turned in and spun as a result of the ensuing contact. That gave Taylor a lead of just over four seconds, which the Action Express driver was able to eat into over the remaining laps.

The two Cadillacs moved away from their remaining rival once the track began to dry as lunchtime approached on Sunday. The Spirit of Daytona Riley-Gibson MK30 LMP2 car could run with the leaders during the wet portion of the race, but had no answer for the Cadillacs on a dry track. Marc Goossens, Renger van der Zande and Rene Rast slipped a lap down in the Riley before the race was complete. Extreme Speed Motorsports drivers Scott Sharp, Ryan Dalziel and Pipo Derani and took fourth position, three laps in arrears, in the best of the team’s pair of Nissan-Onroak DPis.

Ford triumphed in another close battle in the GT Le Mans class. Dirk Muller had to withstand intense late pressure in the Chip Ganassi Ford GT he shared with Joey Hand and Sebastien Bourdais. Patrick Pilet, in the factory Porsche 911 RSR co-driven with Frederic Makowiecki and Dirk Werner, put t

he Ford driver under pressure before having to back off over the final laps, allowing Muller to win by nearly three seconds. The Porsche driver was then pushed hard by James Calado in the Risi Competizione Ferrari 488 GTE, but held on to take the runner-up spot by just 0.091s. The Alegra Motorsports Porsche team claimed a surprise GT Daytona class victory with Michael Christensen, Daniel Morad, Jesse Lazare and father and son Carlos and Michael de Quesada. They moved into contention in the closing stages before factory driver Christensen moved the car into the lead. The Dane crossed the line just a couple of tenths clear of the Land Motorsport Audi R8 LMS driven by Christopher Mies, Jules Gounon, Connor De Phillippi and Jeffrey Schmidt.