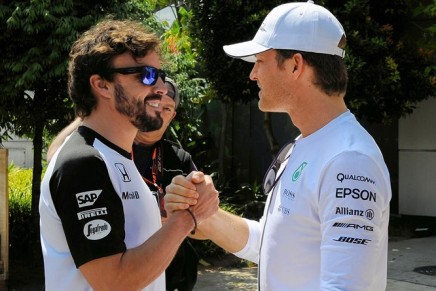 World champion Nico Rosberg has admitted he would have liked Mercedes to replace him for 2017 with Fernando Alonso. Actually, the German marque has signed up Williams driver Valtteri Bottas, having also seriously considered its own junior Pascal Wehrlein. When asked what his preference would have been, Rosberg told the Spanish sports daily Marca: “Ok, now that I’m a fan it’s very easy to respond. Everyone says Alonso and I say it too, because there would have been fireworks with Hamilton. As a fan it would be nice to see those sparks, but from the team side it couldn’t have been and they found a great solution.Bottas is fast and he beat Massa three times in a way similar to Alonso did, and now he can do very well. Of course Hamilton will be at a very, very high level and it will be difficult to beat him, but I proved that it is possible“.

Asked if Alonso could ever have been a serious option for Mercedes, he continued: “No. From Mercedes’ side, I can’t imagine it.” What Rosberg can imagine, however, is that Mercedes will get a run for its money from its rivals this year. “Mercedes is the favourite, we are three times champion, although there are teams that are dangerous, like Red Bull,” he said. “Adrian Newey and new regulations are a combination that has been successful in the past, and I’ve also heard that he is back with the team as he was before,” Rosberg added. And according to Germany’s Auto Bild, Rosberg rates Red Bull’s chances as clearly higher than Ferrari’s for 2017. “I think Red Bull will be the second force,” he said.