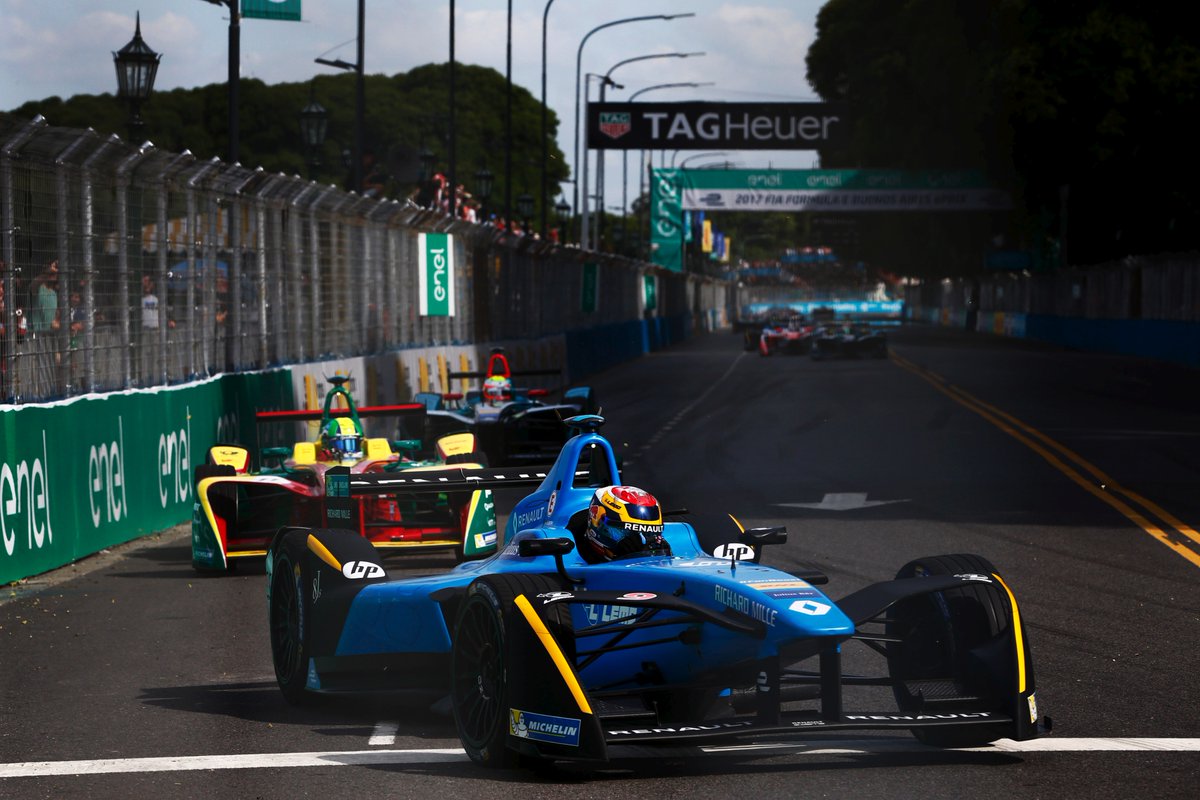 Renault e.dams has won the third ePrix of season three of the FIA Formula E Championship with a mature and confident drive from Sébastien Buemi

on the Puerto Madero circuit. The win is Séb’s third in a row and the team’s sixth consecutive victory, taking the Renault e.dams tally to twelve from twenty-four ePrix since the series inauguration, a 50% success rate.  Nico Prost backed-up Séb’s victory with fourth after a race-long dice with rival racer Lucas di Grassi, Nico has scored points in every ePrix this season, last finishing outside the points at the Long Beach ePrix in April 2016.

Race day started with the threat of the first full wet ePrix on everyone’s minds, however the clouds dissipated to a hot afternoon, once more putting the team’s technical focus on battery management. Both drivers proved pacey through the practice sessions despite the repeated appearance of red flags as competitors clashed with the barriers as an illustration of the tricky track surface on the three-season familiar 2.48km anticlockwise, asphalt and concrete track. Séb drew Q2 and Nico Q4 for qualifying, with Nico unlucky to narrowly miss out on joining Séb in Superpole.

Séb started from P3, Nico P6. Séb maintained position at the start, whilst Nico lost a place, however both worked their way forwards, Séb into P1 ahead of the car swap pit stop, Nico into P3 by the same marker. Séb thereafter sailed serene to his sixth win in a row, whilst Nico fell victim to Lucas di Grassi, dropping to fourth. Post-race, di Grassi did visit the stewards for an unsafe release at the pit stop – for which his team was ultimately penalised – but his finishing position remained.

Sébastien Buemi: “It’s been a very good weekend and to end with a win is an amazing feeling. I think I had a better start than Jean-Eric, but I didn’t try to really attack him in the first corner. I stayed in P2 for a few laps just to work out our relative pace. When I saw I was a little bit quicker than him, I took the opportunity. After that the car ran faultlessly and

there were no issues with the pit stop as the team did a great job. As a driver, I am very happy because I didn’t make any mistakes. To score as many points as possible was really important this weekend and it’s good to have three wins in a row this season. Of course, the points for pole position are missing but in the end I am more than happy with the result.”

Renault e.dams leaves Argentina with 111 points in the Teams Championship, ahead of ABT Schaeffler Audi Sport on 60 points. Sébastian has 75 points in the Drivers’ Championship with his nearest rival, Lucas di Grassi, on 46. Nico Prost is in third position with 36 points.   Renault e.dams, Sébastien and Nico will next be seen in action for the fourth round of season three, the Mexico City ePrix at Circuito Hermanos Rodriguez on April 1.