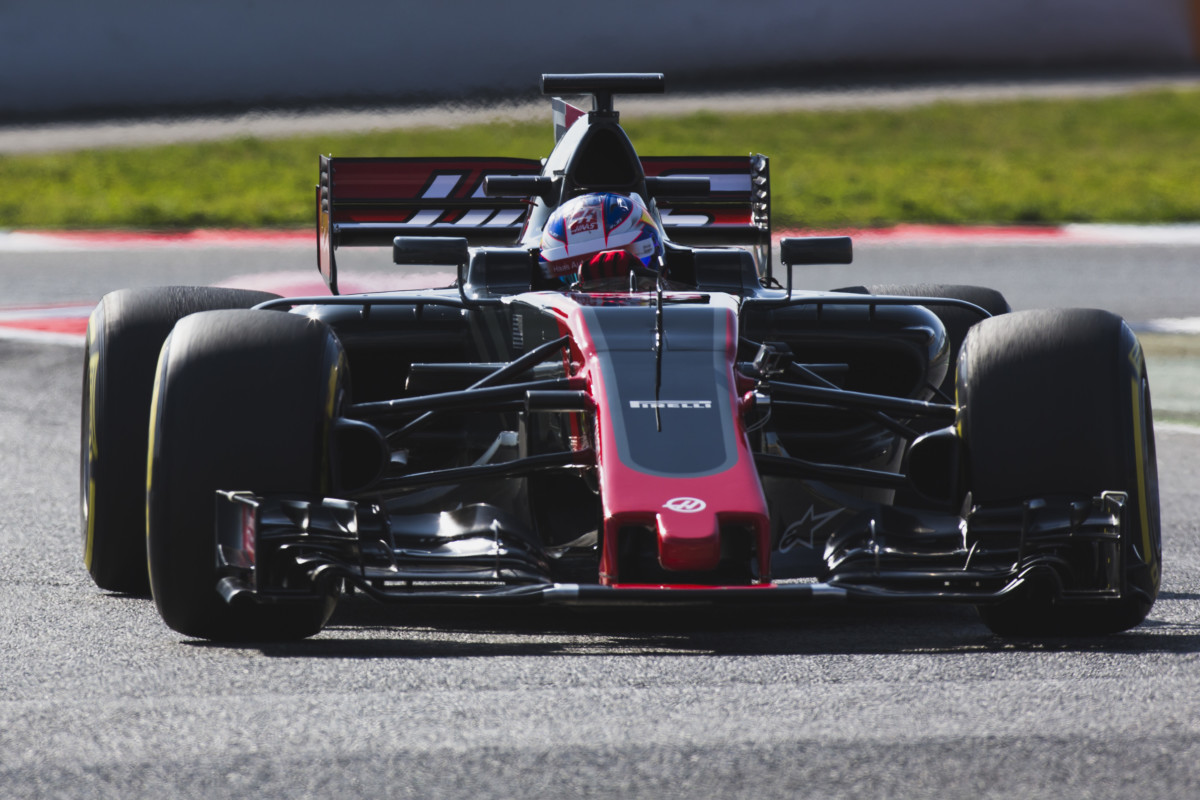 Haas F1 Team’s 2017 challenger in the FIA Formula One World Championship, the VF-17, made its official debut today via social media  and website. It hits the track Monday for the first day of preseason testing at Circuit de Barcelona –

Catalunya. The VF-17 follows the team’s very first car, the VF-16, which carried Haas F1 Team to an eighth-place finish in the 2016 constructor standings. Twenty-nine points were scored by the VF-16 during Haas F1 Team’s inaugural season, the largest points haul of any new Formula One team in this millennium.

Incorporating “VF” into the name of the car is a nod to the history of Haas Automation, the team’s title sponsor. The first CNC machine manufactured by Haas Automation was the VF-1 in 1988. The “V” stands for vertical, which is an industry standard designation for a vertical mill. Gene Haas, founder of Haas Automation, added “F1” to the name to unofficially designate it as the company’s “Very First One”. As chairman of Haas F1 Team, the “F1” moniker of that first machine takes on added significance as Haas prepares for its second Formula One season.

The VF-17 was built under a new set of technical regulations featuring an advanced aerodynamic package designed to create a higher level of downforce. A wider front wing, larger barge boards, a lower and wider rear wing and a diffuser that expands 50 millimeters (two inches) in height and width comprise the changes, along with wider tires from Pirelli, by 60 mm (2.4 inches) in the front and 80 mm (3.1 inches) in the rear, a 25-percent increase to bring the front tires to 305 mm (12 inches) and the rear tires to 405 mm (15.9 inches).

“I think the pedal box is the same, but all the rest is very different from last year’s car,” said Guenthe

r Steiner, team principal, Haas F1 Team. “You always try to make a faster car, which is normally a lighter car. Now we can put on more ballast and get better weight distribution. The aero is completely new, as are the tires, so we needed to have some built-in adjustability. Aesthetically, the car has a more aggressive look. It’s lighter and more aerodynamically efficient. Everything we learned from our first car has been applied to our new car.”

The colors from the original car were carried over to the VF-17, but the overall scheme is different. A dark gray makes up the majority of the livery, with tones of red, black, white and light gray incorporating the look of Haas Automation’s complete line of vertical and horizontal machining centers, turning centers and rotary tables and indexers. Approximately 1,300 employees encompass Haas Automation, with the Oxnard, California-based company exporting its machines to more than 60 countries. The VF-17 showcases Haas Automation’s commitment to technology and innovation to a passionate, global audience.

The #VF17 has arrived! And now, the first video of the @Haas_Automation car has also arrived.