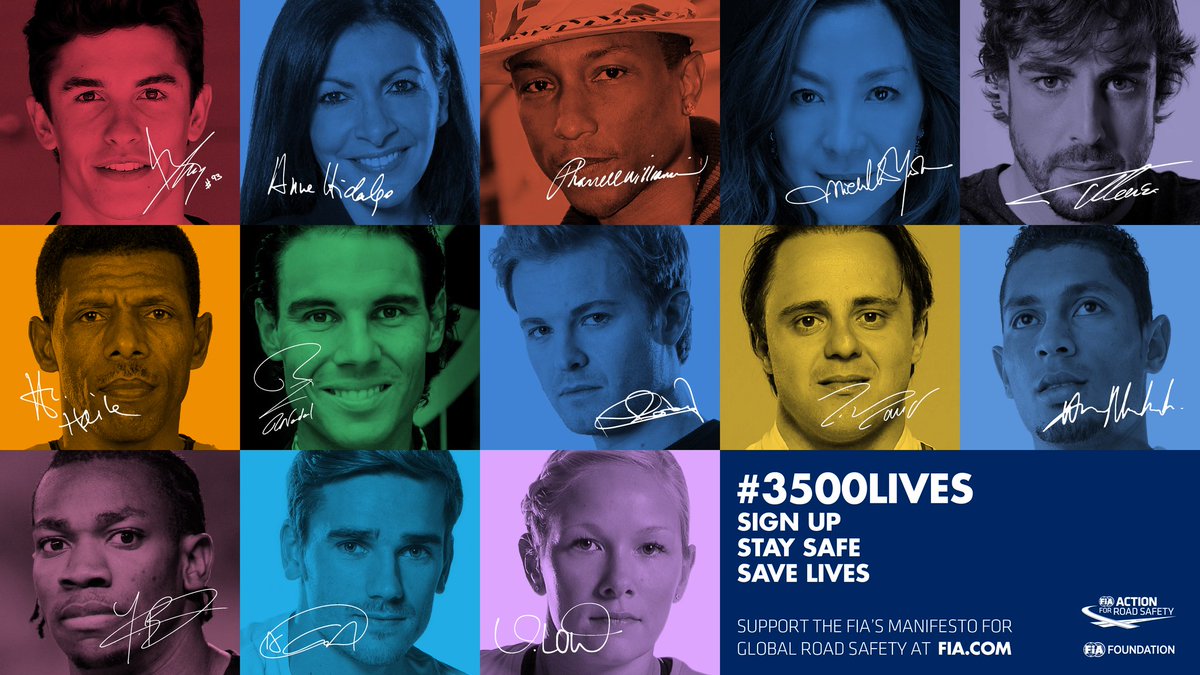 The President of the FIA Jean Todt and the Chairman of the Executive Board and Co-CEO of JCDecaux Jean-Charles Decaux have launched #3500LIVES,

the first worldwide outdoor campaign on road safety.  Everyday, 3,500 people die in car crashes worldwide, which means 1.25 million every year. A particularly alarming situation for 15-29 year-olds, for whom traffic related fatalities are the first cause of mortality. If this trend goes on, by 2030 car crashes could become the first cause of mortality worldwide with nearly 2 million deaths a year. As a genuine public health issue, road safety is a major challenge and a priority issue for every state and citizen around the world. Pope Francis has offered his support to this campaign, and to the cause, when he met with Jean Todt at the Vatican on 25th February 2017.

Through a concrete and positive approach, the #3500LIVES campaign aims to raise awareness and prompt all road users to adopt simple, easily applicable and efficient rules.

They all decided to defend this cause personally and voluntarily (Link to YouTube videos). Those messages will also be endorsed by international institutions like the International Olympic Committee. On 20 February 2017, the FIA and IOC signed a formal agreement to promote the campaign messages across their shared platforms and ahead of sporting events. Through its signature “Sign up, stay safe, save lives”, this campaign underlines the role that each and everyone can play to make road safer for all users. Members of the public are also invited to sign a ten point manifesto (www.fia.com/3500lives), which calls on all governments to make road safety a priority and introduce effective legislation on key risk factors on the road.

Translated in 30 languages, the campaign #3500LIVES is as of today live in 30 cities worldwide and will be rolled out in more than 70 countries by the end of 2017. It is estimated that on the launch the campaign will be seen 1 billion times. The partnership between the FIA – which represents 245 sport and mobility clubs around the world – and JCDecaux – which offers its advertising displays all around the world to ensure a significant visibility – makes this campaign an unprecedented campaign.

FIA President Jean Todt: “I encourage everyone to promote and share the campaign’s key messages and sign our manifesto for government action. Too many people lose their life unnecessarily in road crashes daily. We are proud to have worked together with JCDecaux on this campaign, and also with 13 fantastic Ambassadors, each of which is a role model, especially for young people, the group worst affected by road crashes.

Jean-Charles Decaux, Chairman of the Executive Board and Co-CEO of JCDecaux: “Outdoor advertising is at the core of all sorts of mobility and we are thrilled and proud to contribute to spread these messages around the world through the impact of our locations. This commitment is also aligned with our company’s social responsibility policy and, all the JCDecaux employees, who work on a daily basis to improve urban life quality, are delighted to get involved in the promotion of this cause of public interest: road safety for citizens around the world”.