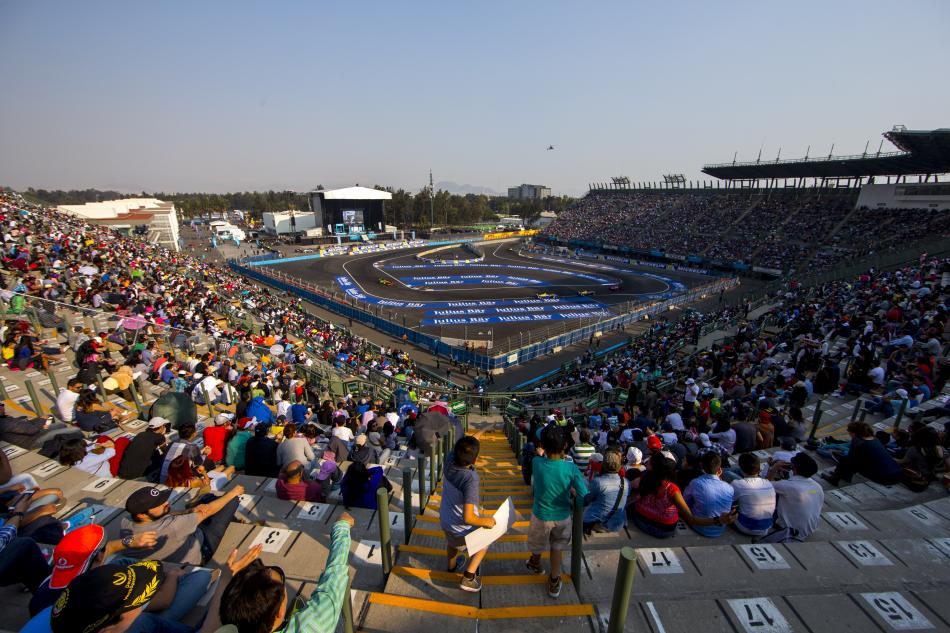 Who can stop Sebastian Buemi? That’s the inevitable question going into the Mexico City race. The Renault e.dams driver is on a winning streak, with three straight wins in Hong Kong, Marrakech and Buenos Aires. In the first three ePrix of this season he has demonstrated a clear superiority over his rivals in the races, although less so when it comes to a single flying lap, given that the Swiss driver has never started from pole position. Three wins means Buemi has charged off into the lead of the Drivers’ championship, with a 29 point advantage over Lucas di Grassi and 39 points in

hand over his team-mate Nicolas Prost, who has been just off the podium in all this season’s races. Renault e.dams has an even bigger lead in the teams classification, the French team having 111 points, 51 more than  second placed ABT Schaeffler Audi Sport, with Mahindra Racing third, a big 74 points behind the leader.

The major threat to Renault e.dams might come from the only team out of the ten entrants that doesn’t use a power train it has built itself: Techeetah runs the same power unit provided by the French car company. The Chinese team had already revealed glimpses of its potential in the first two races and then, in Buenos Aires it took a great pole position with Jean-Eric Vergne followed by its first podium finish, again courtesy of the French driver. On top of that, in Mexico City, Techeetah will be able to count on the support of the home crowd, when new driver Esteban Gutierrez makes his Formula E debut. The Mexican adds to the quality of the field with 59 Formula 1 Grands Prix to his name. For the rest of the season he replaces Ma Qing Hua, who is kept on as reserve driver.

Two other drivers could be extra motivated to return to the circuit named in memory of the Rodriguez brothers and they are Jerome D’Ambrosio and Lucas di Grassi, who went well here last year. The Brazilian was first past the flag and enjoyed the delights of lifting the trophy skywards on the fantastic podium erected inside the Foro Sol, but then experienced the disappointment of disqualification later that evening because of a technical irregularity on his car. The win therefore went to D’Ambrosio, who had started from pole and led the first part of the race, before fighting off a determined attack from Buemi. The Mexico City round is the only Formula E event that is held on a real race track, given that some sections of the Marrakech track use roads usually open to the public. There are two modifications to the layout for this year’s event, at the first corner and at the chicane created halfway round the Peraltada, the slightly banked corner which is part of the history of this track and which is used in its entirety, unlike the layout used for the Formula 1 Grand Prix. As was the case in Buenos Aires, the race distance has been increased by 2 laps to 45, which confirms the technological progress of this year’s powertrain and their management, which has led to greater efficiency and an increase in the overall autonomy of the cars.

The Mexico City ePrix also marks the start of a new initiative – the FIA Smart Cities – which aims to help cities to define solutions best suited to tackle new scenarios in which mobility has a central role. Announced at the last Geneva Motor Show, the initiative wants to bring together the best aspects of sustainable mobility, to make a mark on the cities that host rounds of the FIA Formula E Championship, a series that presents the best opportunities for synergies between the two pillars on which the FIA stands, sport and mobility. The FIA has the support of the city councils, of its clubs and also important players from the industry and the finance, who have opted to support the Federation in this initiative. Solving the mobility challenge will require bold, coordinated actions from the private and public sectors: the hope is that this initiative can contribute to design better cities for those who live in them now and for future generations.

The first part of the FIA Smart Cities will come to life in conjunction with four rounds of the third Formula E season, those held in Mexico City, Berlin and Montreal, as well as a special event in Paris. Each Friday before the race day, there will be a Forum which will bring together speakers from national and local authorities, research institutes, important industry players and FIA members to reflect on how innovations have paved a way for safer, more connected and more sustainable mobility solutions in various cities worldwide.