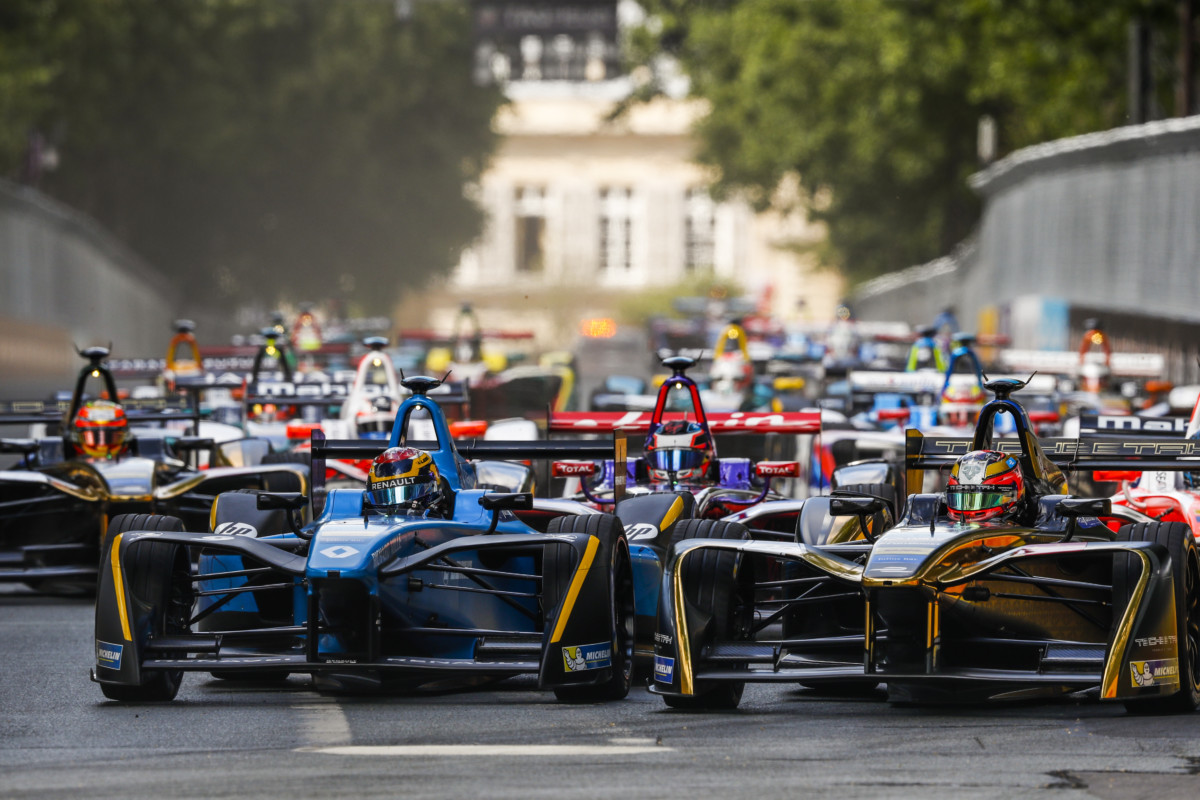 Sebastien Buemi gave Renault e.dams its most important win of the year by producing a dominant display in front of its home crowd in the Paris ePrix

– round six of the 2016/17 FIA Formula E Championship. From Julius Baer pole position, Buemi defended stoutly into the first corner from the charging Jean-Eric Vergne. He then established a small but comfortable lead, as the two leaders eased away from the chasing pack. However, this wasn’t to be Vergne’s day and broken steering sent him crashing out of the race. The Qualcomm Safety Car was deployed, which bunched up the field and gave DS Virgin Racing’s Jose Maria Lopez a shot at fighting for the win. But Buemi had things under control and when the BMW i8 came out again – this time after Lucas di Grassi pitched his ABT Schaeffler Audi Sport car into the barrier – for the second year running the Paris ePrix ended under caution.

Not that this mattered to the huge crowd who flocked to the podium to join in with Buemi and the celebrations. During the course of the event over 46,000 fans packed into the Les Invalides circuit, soaking up the amazing atmosphere in the Allianz eVillage where a succession of live bands played alongside interactive displays in different fan zones entertaining people of all ages. The fun spilled over onto the track too, with a series of spectacular on-track displays, which included Formula E Founder and CEO Alejandro Agag behind the wheel of the 1899 seminal electric land speed record breaker La Jamais Contente – the first ever car to break 100kph and the spiritual grandfather of Formula E.

Sebastien Buemi : “The most important thing for me was to pull away after the grid positon we got. And you know when the brakes are cold, the first few corners are a bit of a guess for everyone and Jean-Eric Vergne was very aggressive and tried to pass me. So, I tried to delay the braking as late as I could, just to stay ahead. I consumed maybe a little bit more energy than I was expecting to use, just to make up a little gap. I lost a bit of time under Full Course Yellow and obviously in the restart when he [JEV] crashed I was having a nice time as he was putting me under pressure. Then we had the safety car and Jose [Maria Lopez] had a great race today, he was really, really quick and I had to push quite hard at the end of the race just to make sure I could build up a bit of a gap.”

After the disappointment of Mexico – where he spun while fighting for the win  and Monaco, where first-lap contact ended his race – Lopez was delighted to finally claim his maiden Formula E podium. Another sensational start from Nick Heidfeld moved the Mahindra driver past Esteban Gutierrez and into fourth place, which became third after Vergne’s retirement. With Felix Rosenqvist driving a strong race to take fourth place, it was the best points haul in the Mahindra’s history.

Robin Frijns scored his best result of the season, taking fifth place for Andretti. The Dutchman picked up a five-second time penalty for speeding under the Full Course Yellow that was brought out when di Grassi and Antonio Felix da Costa in the second Andretti collided, but it didn’t affect his position. After a poor qualifying, di Grassi and da Costa were dicing over 14th place along with Venturi debutant Tom Dillmann. Da Costa had pulled a good move on di Grassi, but the Brazilian appeared to have got him back. However, when he turned in to take his line for the corner, the move was not fully completed and there was contact. Both cars were sent spinning, da Costa’s was damaged and he was out on the spot, but remarkably di Grassi’s was unharmed. With the race under caution, he dived into the pits to make his mandatory car change – as did the rest of the field bar Faraday Future Dragon Racing’s Mike Conway.

However, there was a misunderstanding in the garage and he was released before the stated minimum pitstop time. With a drive-through penalty, he was left with no choice but to attempt to pick up the bonus point for Visa fastest lap. After a tweak to the set-up he returned to the track and duly set a new benchmark, only to see Sam Bird lower his time. As he pushed to regain the point he made a mistake and ended up in the barrier and went home empty-handed. This means Buemi has now extended his points lead to 43. A bad day for ABT Schaeffler Audi Sport was compounded when Daniel Abt – who had driven a storming race to rise to 7th – suffered a technical glitch on the final lap. This promoted Nelson Piquet Jr. to 7th for NextEV NIO and Dillmann to an excellent eighth on his debut.

Mitch Evans was in the top-10 for the third race in a row for Panasonic Jaguar Racing in ninth, while Stephane Sarrazin picked up the final point for Venturi in 10th. The highest placed French driver was Nico Prost, who pulled off a couple of daring overtakes to take sixth and complete an excellent day for the Renault e.dams team.

The FIA Formula E Championship returns with the Berlin ePrix – a double-header – that takes place in the historic Tempelhof Airport on June 10 & 11.